An earlier version of this Editor’s Note was sent out Wednesday in ToI’s weekly update email to members of the Times of Israel Community. To receive these Editor’s Notes as they’re released, join the ToI Community here.

A very strange thing happened in the East Room of the White House on January 28, 2020: US President Donald Trump unveiled a painstakingly constructed “Vision to improve the lives of the Palestinian and Israeli people,” much of which was music to the ears of the average Israeli. But then Prime Minister Benjamin Netanyahu, standing alongside him, immediately subverted it.

Overseen by the US president’s top aide and son-in-law Jared Kushner, the plan broke ground in taking seriously many Israeli concerns that had been marginalized, if not ignored, in previous peace efforts. “Critically,” as I wrote at the time, “it was predicated on the imperative that the rise of a Palestinian state in no way undermine or threaten Israel’s security, and that the US would only ask Israel to consider compromises that would make the country and its people ‘more secure in the short and long term.’” It also included numerous elements guaranteed to infuriate the Palestinians — radically constraining their future sovereign rights, denying them significant status in Jerusalem, and refusing their demand for a “right of return” for refugees.

It was not, however, good enough for Netanyahu. While warmly extolling the virtues of the plan, the prime minister instantly smashed headlong through its carefully delineated parameters and informed Trump that Israel would henceforth begin to “apply its laws to the Jordan Valley, to all the Jewish communities in Judea and Samaria, and to other areas that your plan designates as part of Israel and which the United States has agreed to recognize as part of Israel.”

The Trump plan had indeed designated areas of the West Bank that would come under Israeli sovereignty — but as part of a hoped-for negotiated process with the Palestinians that would give them their constrained state. Unilateral Israeli annexation was the fallback option, to apply only if that process failed. By moving to assert sovereignty right away, Netanyahu was pulling the rug out from under the entire “vision.”

What was unfolding before the very eyes of a watching world was absolutely incomprehensible. Again, as I wrote at the time, “Nowhere in the painstakingly compiled document is a promise made or even implied of any such immediate Israeli annexation. Why would there be? It makes no sense. Why would you unveil a plan, worked on for three years, designed to lead to an agreed-upon deal, carefully calibrated to both reassure Israel and avoid alienating key Arab allies, and then brutally contradict those goals by promising one side all of its spoils right away?” 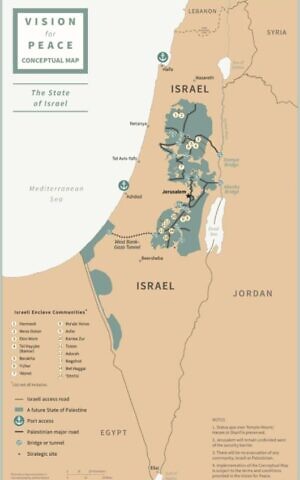 Vision for Peace Conceptual Map published by the Trump Administration on January 28, 2020

And yet, no sooner was the East Room ceremony over than Trump’s ambassador to Israel, David Friedman, was confirming to reporters that Netanyahu could indeed go ahead and annex the roughly 30% of West Bank territory that the plan allocated to Israel — largely comprising the Jordan Valley and all the settlements — with the further assurance that once Israel had applied its law to those areas, the US would recognize the move. Said Friedman: “Israel does not have to wait at all.”

As we know, of course, Netanyahu did not apply Israeli law to the settlements, the Jordan Valley or any other part of the West Bank — neither immediately after the White House ceremony nor since. In the days, weeks and months after the great unveiling, Kushner made it increasingly explicit that the Trump administration would not back unilateral annexation, and that Netanyahu understood and accepted this.

And after doubtless reassuring the leaders of the United Arab Emirates and Bahrain, whose ambassadors were present at the East Room ceremony, that they need not believe their ears, Kushner and the Trump administration went on to broker the Abraham Accords, under which Netanyahu put aside annexation as a key prerequisite of peace treaties with the UAE, Bahrain and Morocco, with the promise of further regional normalization deals to come. 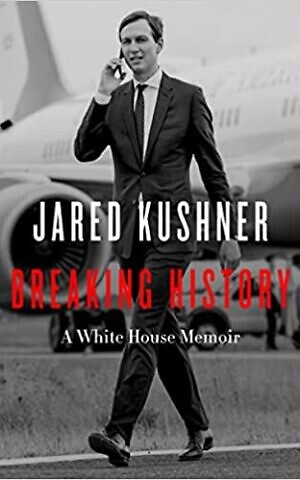 Netanyahu was widely credited for his statesmanship and wisdom in choosing a process of regional normalization for Israel over his and his political bloc’s interest in unilateral annexation. But as of this week, we can now finally understand more fully those bizarrely contradictory Trump and Netanyahu messages at the White House in January 2020, how tenaciously Netanyahu struggled to persuade Trump to back his annexation gambit, and why the then-prime minister was actually given no choice by the US administration but to go along with the Abraham Accords-for-no-annexation equation.

For Jared Kushner, in pre-publication excerpts of his forthcoming book, “A White House Memoir,” has made plain that Friedman — who firmly disputes Kushner’s account, as does Netanyahu’s Likud party — “had assured Bibi that he would get the White House to support annexation more immediately. He had not conveyed this to me or anyone on my team.”

When Netanyahu, in his East Room speech, specified that he would begin annexation, writes Kushner, “I grabbed my chair so intensely that my knuckles turned white, as if my grip could make Bibi stop.”

“This was not what we had negotiated,” Kushner elaborates. “Under our plan, we would eventually recognize Israel’s sovereignty over agreed­ upon areas if Israel took steps to advance Palestinian statehood within the territory we outlined.” 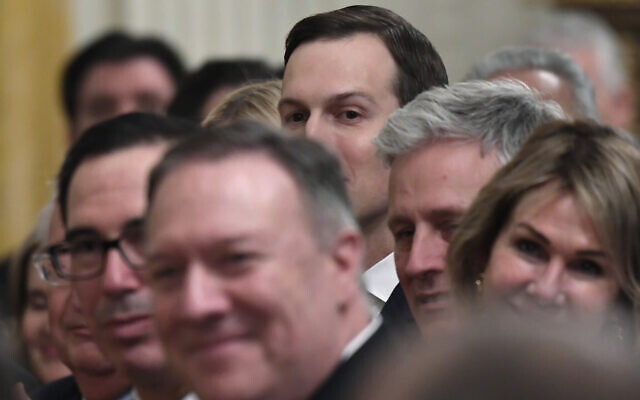 Kushner was furious because Netanyahu’s declaration had torpedoed his delicate negotiations with Israel’s potential new allies in the region and, centrally, because it had given Palestinian Authority President Mahmoud Abbas an easy way to escape the president’s vision and doom the initiative.

“Had the rollout gone according to plan, it would have put Abbas in an impossible position,” writes Kushner. “Reacting harshly against a credible proposal would further alienate him while exposing the hollowness of his position. But the Israeli prime minister had given Abbas exactly the kind of opening he needed to reject our plan.”

Not only was Kushner taken aback, but so too was Trump, in his account. “Bibi gave a campaign speech. I feel dirty,” the president told Kushner immediately after the ceremony. 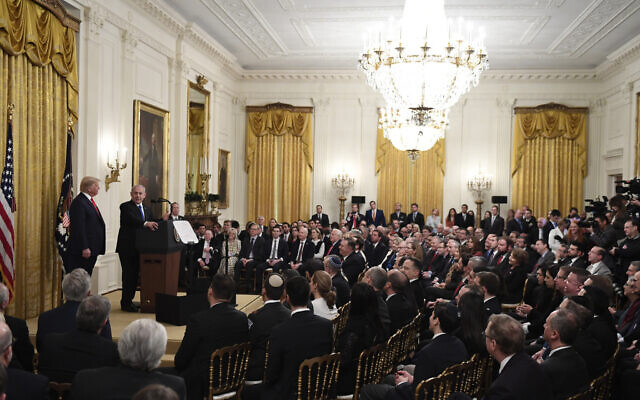 Prime Minister Benjamin Netanyahu speaks with US President Donald Trump during an event to unveil Trump’s Israeli-Palestinian peace plan in the East Room of the White House in Washington on January 28, 2020. (AP/Susan Walsh)

According to Likud, Kushner’s claim that Netanyahu had surprised Trump and undermined the peace plan with an uncoordinated annexation declaration is “utterly baseless.” Quite the contrary. A statement issued by Netanyahu’s party Thursday said the two leaders had exchanged letters in the days ahead of the ceremony, in which Netanyahu made clear that Israel would move forward with a declaration regarding sovereignty “in the coming days.” (More on the letters in this piece by our US correspondent Jacob Magid.)

Netanyahu certainly didn’t give up easily, Kushner vouchsafes, with the prime minister deploying his ambassador to the US, Ron Dermer, to call in on Kushner with the demand that the administration back annexation now.

“I couldn’t believe it. Trump was still fuming over Bibi’s speech. In fact, he had asked me whether he should take the unusual step of endorsing the prime minister’s political rival, Benny Gantz,” Kushner writes. “Had I walked twenty feet down the hall to the Oval and asked Trump to go forward with annexation, the president would have thrown me out.”

Kushner says he told Dermer, “’Don’t take us for granted… We worked our asses off for three years to get to this point. For the first time, Israel has the moral high ground…. But now it’s all screwed up…. You guys think you have been so effective with this administration. I hate to break the reality to you, but we didn’t do any of these things because you convinced us to. We did them because we believe they were the right things to do.’”

It is worth recalling that Trump — who was and is beloved by much of the Israeli right, and abidingly reviled by much of the center-left — entered the presidency avowedly unenthusiastic about settlements. “They don’t help the process,” he told key backer Sheldon Adelson’s Israel Hayom in a jaw-dropping February 2017 interview. “Every time you take land for settlements, there is less land left… I am not somebody that believes that going forward with these settlements is a good thing for peace.” 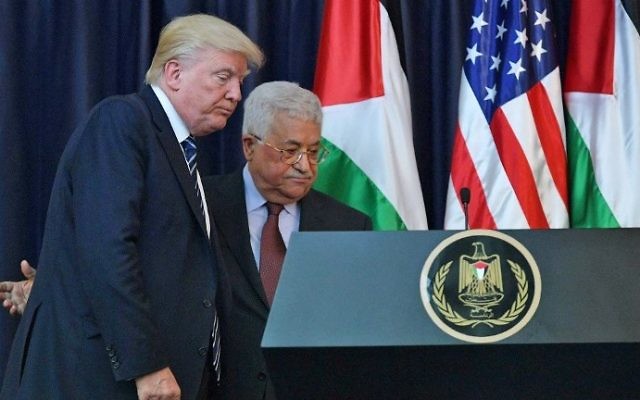 US President Donald Trump (L) and PA President Mahmoud Abbas leave following a joint press conference at the presidential palace in the West Bank city of Bethlehem on May 23, 2017. (AFP/Mandel Ngan)

And he was openly at odds with Netanyahu, during his May 2017 visit to Israel and the West Bank, over the possibility of progress with Abbas, asserting in the visit’s final speech at the Israel Museum that the Palestinians “are ready to reach for peace.” Fresh from a meeting with Abbas in Bethlehem, the president departed from his prepared text to stress: “I know you’ve heard it before. I am telling you. That’s what I do. They are ready to reach for peace.”

The Trump “vision” it is now definitively clear, was an effort to meet just about all of Netanyahu’s demands with respect to the Palestinian conflict but ostensibly do so within the parameters of the framework he no longer endorses: the two-state solution on which Israel’s 1947 international re-legitimacy was founded; the only solution that enables Israel to remain both Jewish and democratic.

Drawn up by an administration demonstrably supportive of Israel, cognizant of its challenges, and working to widen Israel’s acceptance in the region, the plan set out terms the Palestinians were almost certain to reject. “A great plan for Israel,” as characterized by Netanyahu, even as he scuttled it.