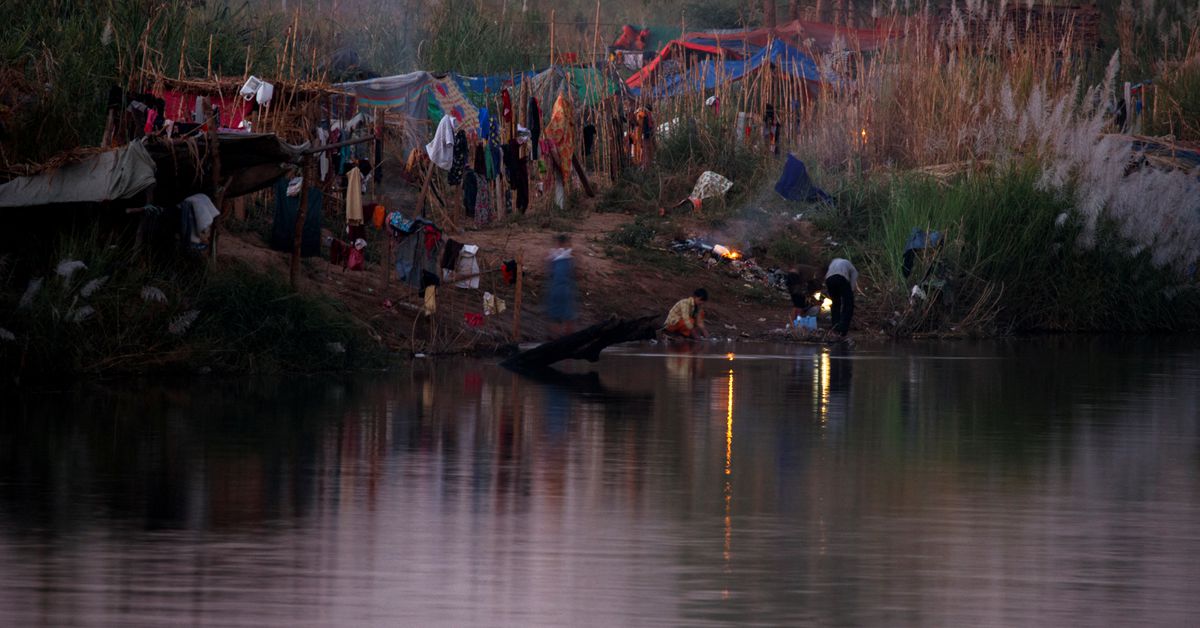 THAI-MYANMAR BORDER, Jan 7 (Reuters) – Thousands of Myanmar villagers are living under makeshift tents alongside a river that borders Thailand, fearful of returning to homes which they said had been bombarded by military air strikes but reluctant to seek refuge across the frontier.

Heavy fighting between the Myanmar military, which seized power in a coup last year, and resistance fighters has killed or displaced thousands of civilians in this region and elsewhere.

Many have fled to Thailand, but poor conditions in refugee camps there have prompted some to return to the Myanmar side of the border, and human rights groups have called for more help for the displaced.

Reuters reporters on the Thai side of the Moei river on Friday saw an estimated 2,000 men, women and children living under tarpaulin on the opposite bank in four separate locations.

One woman from the camp, Sabal Phyu, 42, had waded across the loosely patrolled border to collect donated food and bottled water, before returning to the Myanmar side of the river.

“Over there, we received good aid donations but it was very crowded and difficult to live. Here, we have more freedom,” Sabal Phyu told Reuters.

Sabal Phyu said she initially crossed into Thailand with her husband and four children but came back to the border area after being packed into an empty cattle barn with other refugees near the Thai town of Mae Sot.

About 8,000 Myanmar refugees are staying in temporary shelters in Thailand, according to the International Committee of the Red Cross.

A spokesperson for Myanmar’s military government did not answer calls from Reuters seeking comment.

Asked about the Thai camp conditions, Thailand government spokeswoman Ratchada Dhanadirek said the country was “taking care of the refugees” and carrying out its duties “according to international human rights standards.”

The United Nations Refugee Agency UNHCR said on Friday it had not been granted access by the Thai government to the sites in Mae Sot where refugees are being hosted and also cannot access the Myanmar side of the border.

The deputy Asia director at Human Rights Watch said Thailand needed to do more to support those displaced by fighting in Myanmar.

“Thailand must recognise that their humanitarian obligations to refugees involve more than just allowing some food and medicine packages across the border,” Phil Robertson said.

Myanmar has been in turmoil since the military ousted a civilian government led by Nobel laureate Aung San Suu Kyi on Feb. 1, triggering protests and sporadic clashes in the countryside between anti-junta militia and the army.

More than 1,400 civilians and protesters have been killed by Myanmar security forces since the coup, according to the Assistance Association of Political Prisoners activist group.

The military has said those figures, widely cited by international organisations, are exaggerated.