Former Acting Homeland Security Secretary Chad Wolf is throwing his weight behind Colorado’s Gino Campana as the state’s Republicans face a crowded field in the race for U.S. Senate.

Wolf, who served in the Trump administration, made the endorsement public just a day before the primary debate on Tuesday.

“As President Trump’s Acting Secretary for Homeland Security, I am proud to endorse Gino Campana for U.S. Senate,” Wolf said in a statement provided to Fox News. 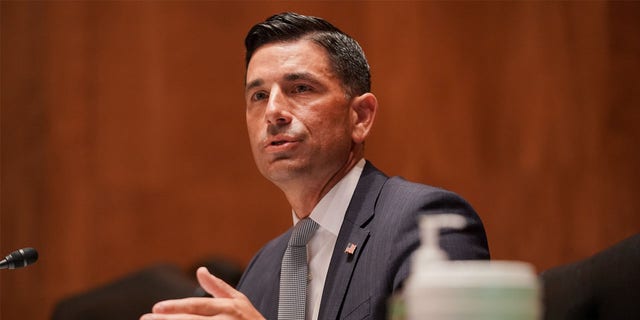 “The Biden and Bennet regime has empowered the criminal networks that drive human trafficking, fentanyl and other narcotics across our southern border through open border policies. When our border is left unsecure, every community and every American is at risk – including those in Colorado,” Wolf added.

“Gino Campana’s immigration policies will ensure that our schools, homes and communities are safer for our families to pursue their American dream. He will fight for a fair and secure immigration system of law, order and justice. As the son of a legal immigrant, Gino understands the importance of a secure border while allowing legal migration to the U.S.”

Campana currently serves as a member of the Fort Collins city council, a seat he won in 2013. According to his website, he’s also served as the Larimer County Republican Party chair and was appointed by former President Trump to serve as chairman of the Public Buildings Reform Board.

Campana and at least six others are reportedly running to unseat Sen. Michael Bennet, a Democrat seeking his third full term. Among them are former Olympic athlete and Air Force veteran Eli Bremer, state Rep. Ron Hanks of Cañon City, and talk radio host Deborah Flora. After Tuesday’s debate, there are plans for another on Jan. 25, and candidate forums are scheduled for Jan. 29 and Feb. 3.

In a campaign video, Campana contrasted Democrats’ “disastrous policies” with the “American Dream” he said his father championed. The ad focuses on Bennet, tying him to President Biden and Democrats in D.C.

The video could be an indication of how Republicans will attack Democrats during the 2022 midterm elections. Biden and Bennet, he said, are “destroying America – government-run health care, trillions in new spending, sky-high inflation, foreign policy disasters, defund the police, total control over our every day lives. Michael Bennet is part of it all.”

Bennet’s campaign did not immediately respond to Fox News’ request for comment.