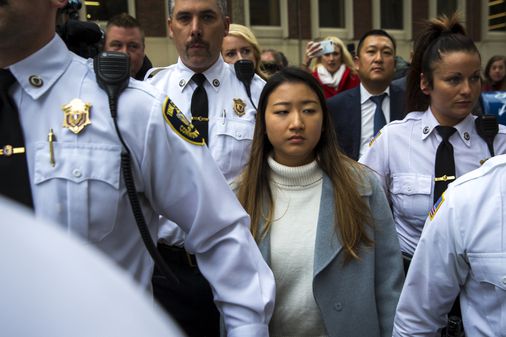 You had been tracking Urtula’s phone the morning that he jumped from the Renaissance Parking Garage and was present at the time of his suicide. His family was in town for his graduation. Instead, they learned of his suicide.

In imposing the sentence, Suffolk Superior Court Judge Robert Ullmann urged You “to make every possible effort to live your life in a way that honors the memory of Alexander Urtula.”

Ullmann also said he hopes the case will “drive home” to teens and young adults that “this type of messaging, demeaning someone when they are feeling down or even suggesting suicide can have devastating consequences.”

The judge also ordered You not to profit or benefit in any way from her case. She also must perform 100 hours of community service in each of the first three years.

You, 23, a native of South Korea who is an American citizen, softly answered yes when asked by the judge if she understood the plea agreement and the consequences of admitting guilt. Asked if she would like to make a statement, her lawyer Steven Kim said You was too distraught to speak.

Prosecutors briefly laid out the way she allegedly drove Urtula, 22, to suicide. They said that You harangued Urtula, a biology major from New Jersey, over the course of their 18-month relationship with a blizzard of text messages urging him to kill himself.

According to Rollins, the “unrelenting abuse was witnessed by friends and classmates of both parties and documented extensively in text messages between the couple.”

Between March 29, 2019, and Urtula’s death on May 20, 2019, the couple exchanged 75,337 text messages, of which 47,130 were sent by You,” Rollins said. “You repeatedly told the victim that he should kill himself or die and waged a campaign of abuse that stripped the victim of his free will. Evidence… illustrate that his suicidality began only as a result of Ms. Young’s near constant abuse,” Rollins said.

Assistant District Attorney Caitlin Grasso said prosecutors agreed to accept a plea to in part because Urtula’s family was supportive and the plea would spare the family the pain of a trial.

“The Commonwealth’s position is that conduct her was morally reprehensible,” said Grasso. “However the defendant is not likely to reoffend and is amenable to rehabilitation.”

Grasso said the Commonwealth was most concerned with accountability — Ms. You is willing to plead guilty to this offense — and minimizing the impact that a trial would cause the family in this case.”

Grasso read a statement from Urtula’s family and presented a photo of Alex to the court.

“May 20, 2019 was to be a celebration of graduation and the beginning of his productive life,” the statement said. “But instead of him moving forward into the world, planning and enjoying the next steps, we, his family, abruptly found ourselves planning and attending his funeral. it was so very painful on the drive back home.”

But the family said, “We bear no feelings of anger or reprisal. We believe that time will take us through in the moments we mourn and celebrate his life.”

Defense attorney Kim argued that, in the end, when it became clear Urtula was close to killing himself, You tried to stop him.

“As soon as Ms. You understood that he was trying to commit suicide, Ms. You did everything she could to prevent it, calling, texting, pleading, begging, rushing over there,” Kim said.

“Ms. You is a wonderful young woman who has deep deep remorse. This plea will allow her to move on with her life and preserves her potential to have a bright future and for the Urtula family to have closure as well.”

Ullmann made clear that he believes the case is unlike other similar cases involving texting, an apparent reference to the case against Michelle Carter, who was convicted of involuntary manslaughter in 2017 after her boyfriend Conrad Roy III committed suicide in 2014. That case also hinged on text messages in which she coaxed Roy “to take action.”

Carter was sentenced to 2 1/2 years in prison with 15 months served and the rest suspended. She was released in 2020, but remains on probation.

Her case was the first in which someone was convicted of manslaughter for using their words.

Ullmann said the actions in cases like Carter’s were more specific and connected to the immediate cause of death.

“This is a tragic case,” the judge said. “Frankly the statement of the Urtula family is heartbreaking.

”To the members of the Urtula family, I am deeply sorry for your loss and I greatly admire how you’ve responded to this tragedy,” he said.

Andrea Estes can be reached at andrea.estes@globe.com.