“I don’t think the president’s rhetoric in Atlanta was particularly useful,” Axelrod, a CNN senior legal adviser said on Thursday. “There are real issues here and they shouldn’t be obscured by hyperbolic rhetoric.” 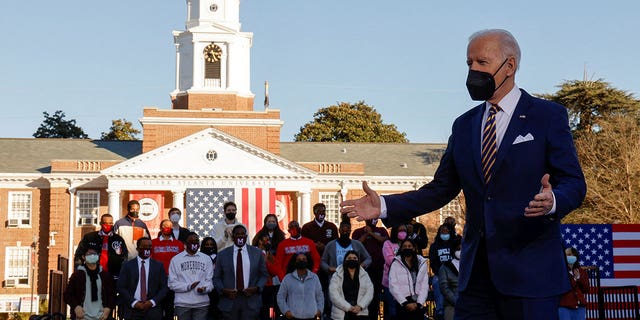 The speech was widely panned by Republicans but was also criticized by some prominent Democrats including longtime Biden ally Sen. Dick Durbin (D-Ill.) who said Biden “perhaps went a little too far.”

MSNBC commentator Al Sharpton also dinged Biden on the speech, calling it a “You’re going to hell” speech rather than one that would get voters’ support.

President Joe Biden speaks in support of changing the Senate filibuster rules to ensure the right to vote is defended, at Atlanta University Center Consortium, on the grounds of Morehouse College and Clark Atlanta University, Tuesday, Jan. 11, 2022, in Atlanta. (AP Photo/Patrick Semansky)

“I know there has been a lot of claim of the offensive nature of the speech yesterday, which is hilarious on many levels, given how many people sat silently over the last four years for the former president,” Psaki said during a Wednesday press briefing.