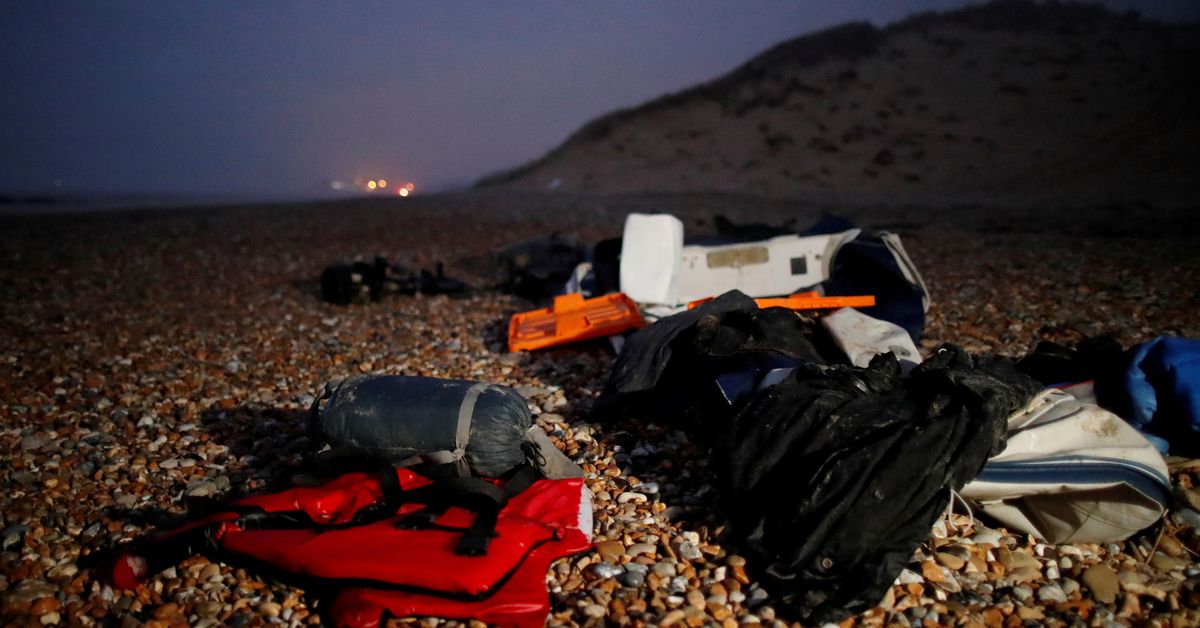 DUNKIRK, France/ZAGREB, Nov 25 (Reuters) – France pledged on Thursday to step up surveillance of its northern shores, but migrants huddling in makeshift camps said neither that nor a tragic drowning the day before would stop them from trying to cross the Channel to Britain.

Seventeen men, seven women and three teenagers died on Wednesday when their dinghy deflated in the Channel, one of many such risky journeys attempted in small, overloaded boats by people fleeing poverty and war in Afghanistan, Iraq and beyond.

With relations fraught, much of the focus on Thursday was on culpability, even if both sides vowed to seek joint solutions.

“I will … say very clearly that our security forces are mobilised day and night,” Macron said during a visit to the Croatian capital Zagreb, promising “maximum mobilisation” of French forces, with reservists and drones watching the coast.

“But above all, we need to seriously strengthen cooperation … with Belgium, the Netherlands, Britain and the European Commission.”

Johnson said later on Thursday that he had written to Macron to set out five steps the two countries could take to avoid the deaths of more migrants.

They included joint patrols to prevent more boats from leaving French beaches, using sensors and radar and immediate work on a returns agreement with France and a similar deal with the European Union, Johnson said.

When Britain left the EU, it was no longer able to use the bloc’s system for returning migrants to the first member state they entered.

Wednesday’s was the worst such incident on record in the waterway separating Britain and France, one of the world’s busiest shipping lanes.

But migrants in a small makeshift camp on the outskirts of Dunkirk, near the seashore, said they would keep trying to reach Britain, whatever the risks.

“Yesterday is sad and it is scary but we have to go by boat, there is no other way,” said 28-year old Manzar, a Kurd from Iran, huddled by a fire alongside a few friends.

A damaged inflatable dinghy and a sleeping bag abandonned by migrants are seen on the beach near Wimereux, France, November 24, 2021. REUTERS/Gonzalo Fuentes

“Maybe it’s dangerous, maybe we die, but maybe it will be safe. We have to try our chance. It’s a risk, we already know it is a risk.” Manzar said he had left Iran six months ago and arrived in France 20 days ago, after walking across Europe.

Britain repeated an offer to have joint British-French patrols off the French coast near Calais.

Paris has resisted such calls and it is unclear whether it will change its mind five months before a presidential election in which migration and security are important topics.

Migration is also a sensitive issue in Britain, where Brexit campaigners told voters that leaving the European Union would mean regaining control of borders. London has in the past threatened to cut financial support for France’s border policing if it fails to stem the flow of migrants.

British interior minister Priti Patel said she would meet her French counterpart at the weekend and was sending officials to Paris on Friday to discuss better cooperation.

‘A TRAGEDY THAT WE DREADED’

Rescue volunteers and rights groups said drownings were to be expected as smugglers and migrants take more risks to avoid a growing police presence.

“To accuse only the smugglers is to hide the responsibility of the French and British authorities,” the Auberge de Migrants NGO said.

It and other groups pointed to a lack of legal migration routes and added security at the Eurotunnel undersea rail link, which has pushed migrants to try the perilous sea crossing. read more

“This a tragedy that we dreaded, that was expected; we had sounded the alarm,” said Bernard Barron, head of the Calais region SNSM, a volunteer group that rescues people at sea.

But Johnson’s spokesperson said providing a safe route for migrants to claim asylum from France would only add to the incentives for people to make dangerous journeys.

Before Wednesday’s disaster, 14 people had drowned this year trying to reach Britain, a French official said. In 2020, seven people died and two disappeared, while in 2019 four died.