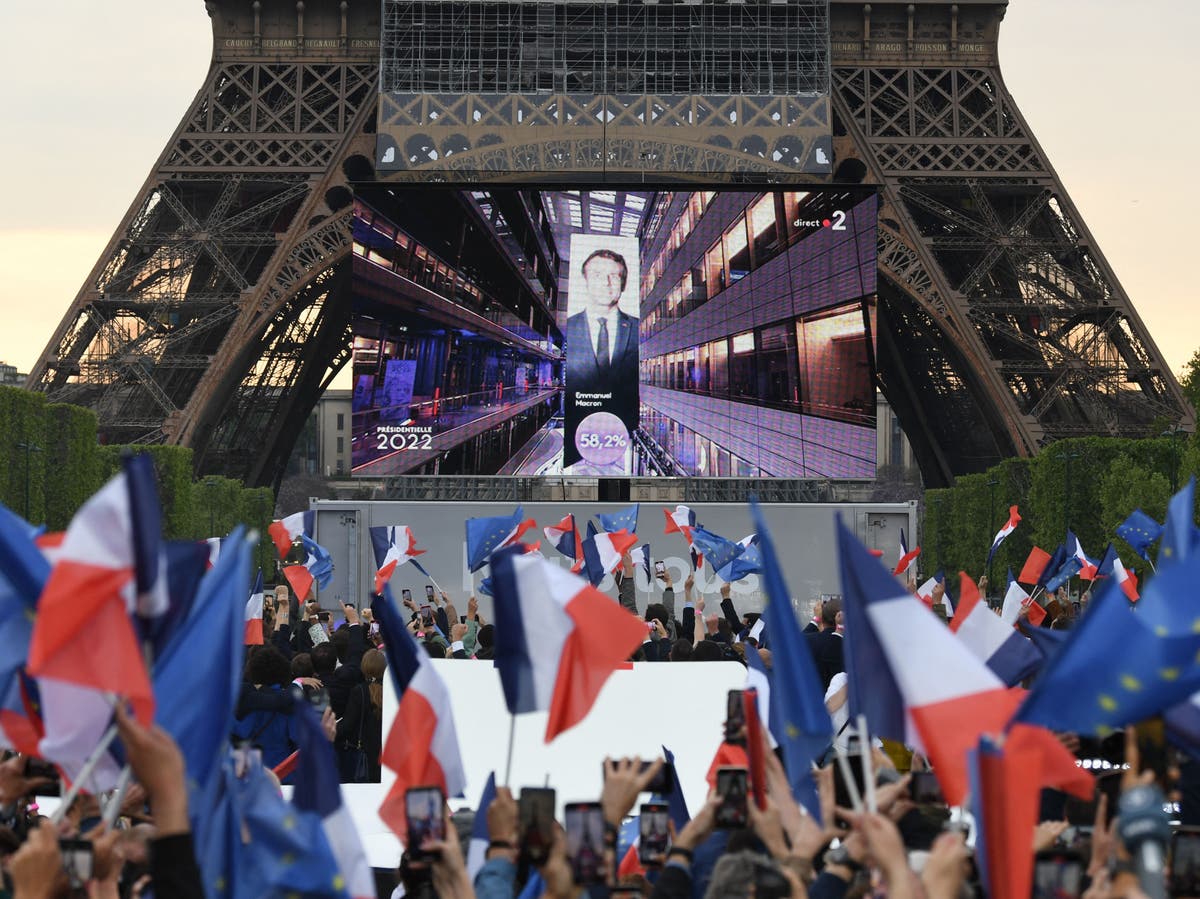 Emmanuel Macron has vowed to be a president ‘for all’ in a victory speech after exit polls forecast his election win.

Polls after voting ended on Sunday suggest around 58 per cent of votes were cast in favour of the current president, compared to 41 per cent for the National Rally leader Marine Le Pen.

If the projections are borne out by official results, Mr Macron would be the first French president in 20 years to win a second term.

Mr Macron addressed supporters in a speech in front of the Eiffel Tower after the polls were announced, in which he recognised that many people voted against him.

“The coming years won’t be easy,” he said. “But they will be historic. It is with ambition and goodwill for our country – for all – I will be at your side to deal with the next five years.”

Emmanuel Macron defeated his far-right rival Marine Le Pen in the second round of France’s presidential election after winning 58.55 per cent of the votes against 41.45 per cent of Ms Le Pen, the official vote count by interior ministry showed on Monday.

It was a decline in Mr Macron’s vote share in comparison to his victory in 2017, when he won 66 per cent of the votes.

However, it was a boost for Ms Le Pen from five years ago when she got 33.9 per cent of votes.

The abstention rate was 28.1 per cent against 25.4 per cent in 2017, marking the lowest turnout ever recorded in a French presidential election final since 1969.

Emmanuel Macron’s victory was hailed globally as an example of “liberal democracy in action”, as a reprieve for mainstream politics rocked in recent years by Britain’s exit from the European Union, the 2016 election of Donald Trump and the rise of a new generation of nationalist leaders.

The UK prime minister wrote on Twitter: “Congratulations to Emmanuel Macron on your re-election as president of France.”

“France is one of our closest and most important allies. I look forward to continuing to work together on the issues which matter most to our two countries and to the world.”

US president Joe Biden said: “France is our oldest ally and a key partner in addressing global challenges.”
“I look forward to our continued close cooperation – including on supporting Ukraine, defending democracy, and countering climate change.”

Australian prime minister Scott Morrison said the victory of Mr Macron was a “great expression of liberal democracy in action in uncertain times … We wish you and France every success, in particular your leadership in Europe and as an important partner to Australia in the Indo-Pacific.”

Justin Trudeau, prime minister of Canada congratulated Mr Macron, writing on Twitter: “Looking forward to continuing our work together on the issues that matter most to people in Canada and France – from defending democracy, to fighting climate change, to creating good jobs and economic growth for the middle class.”

“We can count on France for five more years,” Charles Michel, president of the European Council, said on Twitter.

Ursula von der Leyen, president of the European Commission, said: “I am delighted to be able to continue our excellent cooperation.”

Ukrainian president Volodymyr Zelensky said he congratulated his French counterpart by phone.
On Twitter, he described Mr Macron as a “true friend of Ukraine” as the two have spoken numerous times since Russia’s invasion.

“I wish him further success for the sake of the [French] people. I appreciate his support and I am convinced that we are moving together towards new common victories,” he wrote.

Indian prime minister Narendra Modi also tweeted a congratulatory message. He said: “Congratulations to my friend Emmanuel Macron on being re-elected as the President of France! I look forward to continue working together to deepen the India-France Strategic Partnership.”

French opposition leader Marine Le Pen appeared to look unfazed despite her third failed bid for the presidency and said she will “continue the fight for France and the French people”.

Amassing more than 12 million votes – a historic high for her anti-immigration party – is “a shining victory”, she said in her speech.

“In this defeat, I can’t help but feel a form of hope”, the 53-year-old told supporters who were chanting “Marine! Marine!”

“I fear the next five years will not break with the contempt and the brutal policies of the last five years and Emmanuel Macron will do nothing to repair the divisions in our country,” she added.

Emmanuel Macron won with a comfortable margin of 58.6 per cent of votes, according to interior ministry figures.

Ms Le Pen, the candidate of the far-right National Rally party (Rassemblement National or RN), received 41.4 per cent of the votes.

An investigation has been launched against “persons in charge of public authority” at the time when two people were fatally shot and killed in Pont Neuf, Paris.

They would be investigated for “attempted voluntary manslaughter”, according to AFP.

The shots on the people in the speeding car are believed to have been fired by a police-issue Heckler & Koch G36 assault rifle.

A large police presence was seen in the heart of the capital after the incident as dead bodies covered in white sheets were taken out of a Volkswagen sedan.

General Inspectorate of the National Police, the French police oversight body, is also expected to be deployed as per protocol following the officer’s use of a firearm.

The two people were shot dead and a third person, a woman, was severely wounded after a car came speeding towards them on the oldest bridge in the French capital, an investigating source told AP.

The incident took place shortly after midnight, hours after French president Emmanuel Macron won a second term and protests broke out in the capital.

Some sense of perspective is needed when peering across the channel, Sean O’Grady writes.

Yes, France is saved, and Europe with it, thanks to the older generation of voters who turned out for Emmanuel Macron.

Macron will take his modest vote as a mandate to strengthen his political leadership of the European Union post-Merkel: “More Europe”, as he calls it. It’s not necessarily cheering news for the UK, by the way, to see the EU enjoying a sense of direction.

Read the full Voices piece below:

Paris police have shot two people dead and severely wounded a third person, a woman, after a car came speeding towards them on the oldest bridge in the French capital, an investigating source told AP.

The incident took place shortly after midnight, hours after French president Emmanuel Macron won a second term and protests broke out in the capital.

There were no early clues pointing to a link with the presidential election, however, or it being a terrorist act.

“A car came rushing towards police soon after midnight, and refused to stop,” said an investigating source.

“One of the police officers opened fire, killing two people and wounding a third.”

It happened on the ancient Pont Neuf, in the centre of the city and during the early hours of Monday morning, an examining magistrate attended the scene, which was closed to traffic.

Police at the scene confirmed that the wounded person was a woman who was in the back of the car. Bullets hit her arm and she was rushed to the hospital for “urgent treatment”.

The source said there was no return of fire from the car.

When will the French election results be announced?

Cheers of joy erupted as the results appeared on a giant screen at the Champ de Mars park at the foot of the Eiffel tower, where Macron’s supporters cheered, waving French and EU flags.

Such estimates are normally accurate but may be fine-tuned as official results come in from around the country.

Read the full story below:

Outside France, Mr Macron’s victory was hailed as a reprieve for mainstream politics rocked in recent years by Britain’s exit from the European Union, the 2016 election of Donald Trump and the rise of a new generation of nationalist leaders.

“Bravo Emmanuel,” European Council President Charles Michel, wrote on Twitter. “In this turbulent period, we need a solid Europe and a France totally committed to a more sovereign and more strategic European Union.”

“Congratulations to the President and a true friend EmmanuelMacron on the election victory,” Ukraine President Volodymyr Zelenskiy wrote on his Twitter account in early hours on Monday.

Ukraine’s leader has congratulated Macron on winning a second term.

Volodymy Zelenskyy called Macron “a true friend of Ukraine”on Sunday and expressed appreciation for his support.

Tweeting in French, Mr Zelenskyy said: “I’m convinced that we will advance together toward new joint victories. Toward a strong and united Europe!”

Mr Macron has sought a diplomatic solution to Russia’s war and his country has sent significant weapons to Ukraine with more planned.

In a TV debate ahead of Sunday’s runoff, Mr Macron assailed Marine Le Pen’s past ties to Russia, notably a loan her party got from a Russian-Czech bank in 2014.

French far-right leader Marine Le Pen said she would keep up the fight against Emmanuel Macron just as she conceded defeat in the presidential election.

An Ipsos poll gave Mr Macron 58.2% of the vote and Marine Le Pen 41.8%, a decisive victory despite doubts about the current president’s handling of the economy and ability to connect with voters, and despite a lower-than-usual turnout.

“I will continue the fight for France and the French people,” Ms Le Pen told supporters in a defiant speech shortly after the exit poll was announced on Sunday evening.

“I fear the next five years will not break with the contempt and the brutal policies of the last five years and Emmanuel Macron will do nothing to repair the divisions in our country.”