Gov. Ron DeSantis traveled (rhetorically) all the way to the antipodes — Australia — Tuesday to find another villain in what he sees as a personal-liberty-versus-lockdown battle over COVID-19.

During a speech to International Boat Builders’ Exhibition and Conference in Tampa, he cast himself — and his personal-freedom COVID policy — as firmly on the side of liberty. 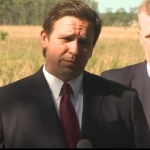 “You say, like, ‘It can’t happen here.’ You know, you guys look what’s going on in Australia right now. You know, they’re enforcing, after a year and a half, they’re still enforcing lockdowns by the military,” he continued.

“That’s not a free country. It’s not a free country at all. In fact, I mean, I wonder why we would still have the same diplomatic relations when they’re doing that. Is Australia freer than China, communist China, right now? I don’t know. The fact that that’s even a question tells you something has gone dramatically off the rails with some of this stuff.”

Australia has, in fact, taken an aggressive approach to COVID, ordering lockdowns and restricting entry into the country and even between individual states, as reported in this recent story by The New York Times.

DeSantis didn’t mention that he issued a stay-at-home order himself, closing nonessential businesses and public schools, colleges, and universities, although he lifted the order relatively early and expressed regret at taking the step.

The pandemic response is definitely an issue in next year’s governor’s race, with Democrats Charlie Crist and Nikki Fried criticizing DeSantis for doing too little to push vaccines and blocking school districts from requiring kids to wear face masks. However, Republicans have mobilized behind the school-mask issue via rowdy demonstrations during school board meetings.

Gov. DeSantis, meanwhile, complained about what one might call COVID creep — beginning when public health officials called for “Fifteen days to stop the spread,” continuing with lockdowns in some states, and extending to vaccine mandates. He singled out Anthony Fauci, who leads the federal response, for criticism.

“I look at this and I just wonder what is the endgame on it? It seems to me that this has really devolved away from anything having to do with health and really just is more about control, and there are certain people that really want to exercise control over others.”

DeSantis pointed to vaccine and testing mandates for nurses as an example. The mandates are pushing some of these professionals out of their jobs in protest despite their importance to keeping hospitals operating, he said — adding that the same goes for other public safety workers, even those with natural immunity because of previous infections.

“If it was about health, you’d be inviting all the nurses in that you can,” he said. “But that’s not what they’re doing.”

He promised: “We’re going to make sure that we’re on the vanguard of ensuring that we remain a free society. We will be an absolute roadblock to any attempt to undermine people’s ability to live their lives and their livelihoods.”

Fauci: COVID-19 Booster Shots Needed For Those With Compromised Immune Systems : Coronavirus Updates...
The COVID culture war: At what point should personal freedom yield to the common good? - USA TODAY
Back to school and COVID: You asked and we have answers - KPRC Click2Houston