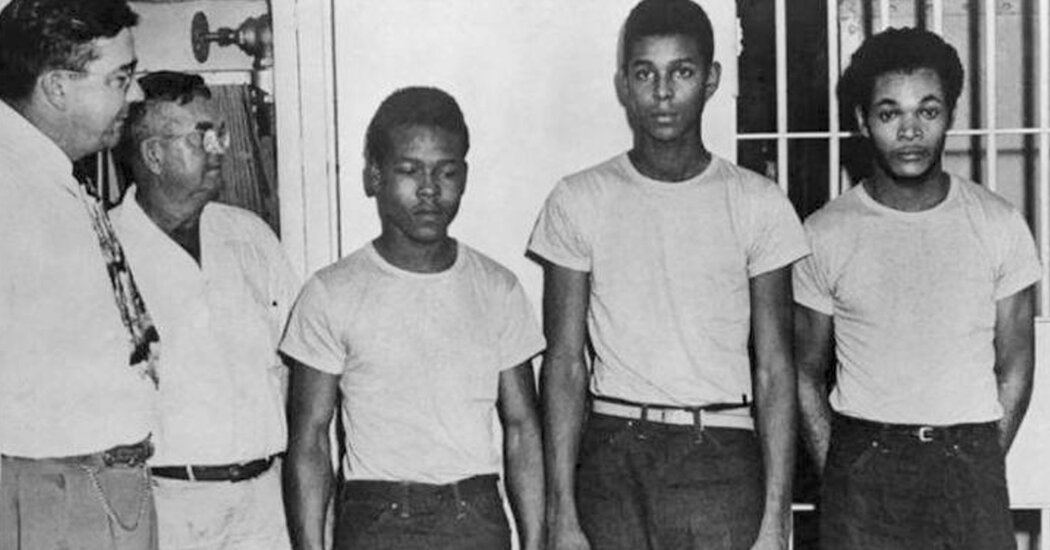 Four Black men wrongly charged with raping a white woman more than 70 years ago in Florida were exonerated on Monday, bringing an end to a saga that has shadowed their families for decades.

The accused — Charles Greenlee, Walter Irvin, Samuel Shepherd and Ernest Thomas, known as the Groveland Four — died before Florida officials re-examined the case, which a prosecutor said lacked due process and would not be tried today.

It all began on July 16, 1949, when a 17-year-old white woman and her estranged husband told the police that after their car broke down in Lake County, Fla., the four men had stopped to provide help, then took the woman from the car and raped her.

The accusation left a trail of destruction. Mr. Thomas was killed by a mob after fleeing Lake County. Mr. Irvin and Mr. Shepherd, both of whom were World War II veterans, were shot by Willis McCall, the Lake County Sheriff, while they were being taken to a pretrial hearing before their cases were retried in 1951. The sheriff claimed that the men, who were in handcuffs, had tried to escape.

Mr. Shepherd died and Mr. Irvin pretended to be dead and survived. Mr. Irvin later provided crucial testimony about the events that led up to the shooting. He died in 1969, a year after he was granted parole.

Heidi Davis, a Lake County circuit court administrative judge, on Monday set aside the judgments and sentences for Mr. Greenlee and Mr. Irvin. The court dismissed the indictments of Mr. Thomas and Mr. Shepherd, whose cases had not been tried, or were being retried, when they were killed.

Carol Greenlee, the daughter of Mr. Greenlee, said she had been seeking her father’s exoneration since the late 1960s, even though he forbid her to do it because the case was so painful for him. Ms. Greenlee, 72, said the court’s ruling was the end “of feeling that nobody is listening, that you are inside a prison of your own that you need to break out but you don’t know how because all the doors are locked.”

The state attorney for the Fifth Judicial Circuit, Bill Gladson, filed a motion to dismiss the charges after the case was referred to his office by the Florida Department of Law Enforcement in July.

In August, investigators spoke with a grandson of Jesse Hunter, the state attorney who prosecuted the case. Broward Hunter said he found correspondence in his grandfather’s law office that convinced him that Jesse Hunter and the judge presiding over the retrial knew that no rape had occurred.

Investigators were also skeptical about evidence provided by James Yates, a sheriff’s deputy who was the state’s primary witness in the 1949 trial and the 1951 retrial.

While families of the accused were haunted by the case for decades, it took two books to spur a re-examination: “Legal Lynching: The Sad Saga of the Groveland Four,” by Gary Corsair, published in 2004, and “Devil in the Grove: Thurgood Marshall, the Groveland Boys, and the Dawn of a New America,” by Gilbert King, which won a Pulitzer Prize after it was published in 2012.

In April 2017, the state of Florida formally apologized to the families of the four men. In December 2018, the Department of Law Enforcement was ordered to review the case. The four men were pardoned by Gov. Ron DeSantis in January 2019.

At the time of the pardon, Norma Padgett, the woman who said she was raped, testified at a clemency board hearing that she did not want them pardoned. She could not be reached for comment on Monday.

In October, Mr. Gladson filed a motion to clear all four men of the charges.

He wrote in his motion that today, no “fair-minded” prosecutor would even consider filing the charges and that “the evidence strongly suggests that the sheriff, the judge and the prosecutor all but ensured guilty verdicts in this case.”

“These officials, disguised as keepers of the peace and masquerading as ministers of justice, disregarded their oaths, and set in motion a series of events that forever destroyed these men, their families and a community,” Mr. Gladson wrote. “I have not witnessed a more complete breakdown of the criminal justice system, nor do I ever expect I will again.”

FDA approval of the Covid-19 vaccine could mean more people will get vaccinated for an unexpected re...
Team USA women's basketball vs. Japan score, Tokyo Olympics: U.S. cruises to seventh gold medal in a...
Florida family set to have vaccine clinic at love one's funeral - Insider