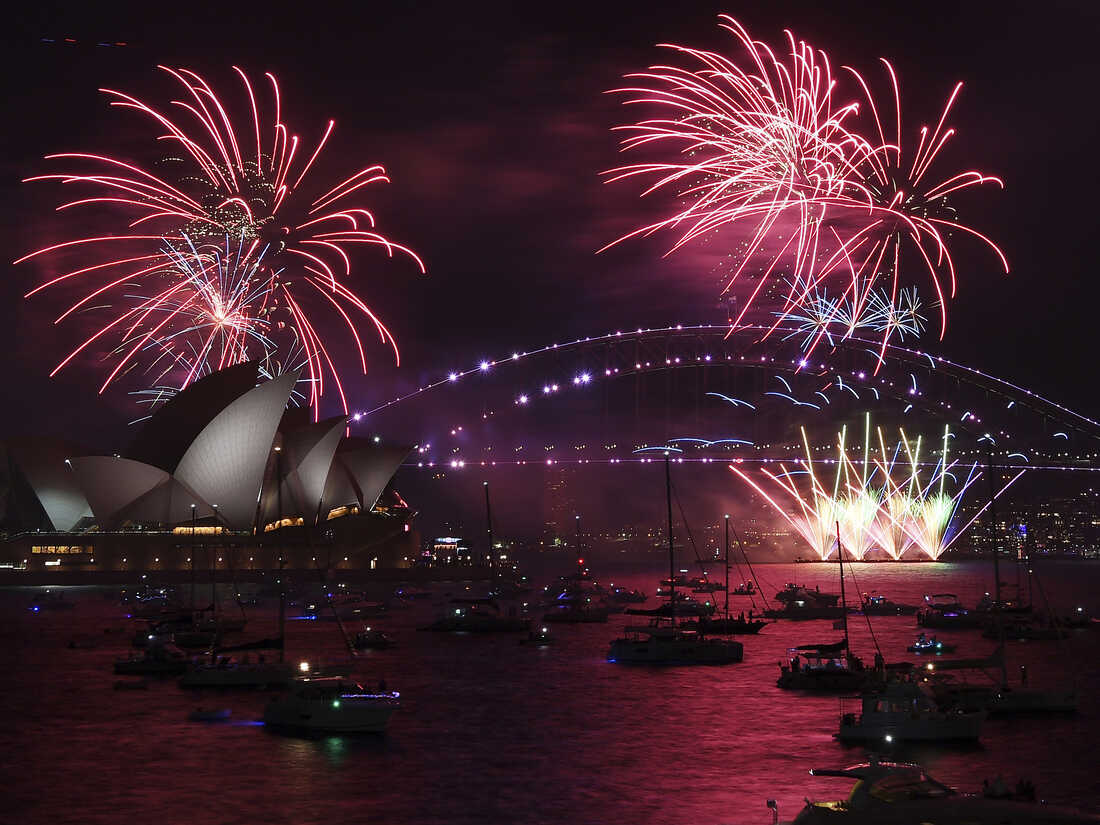 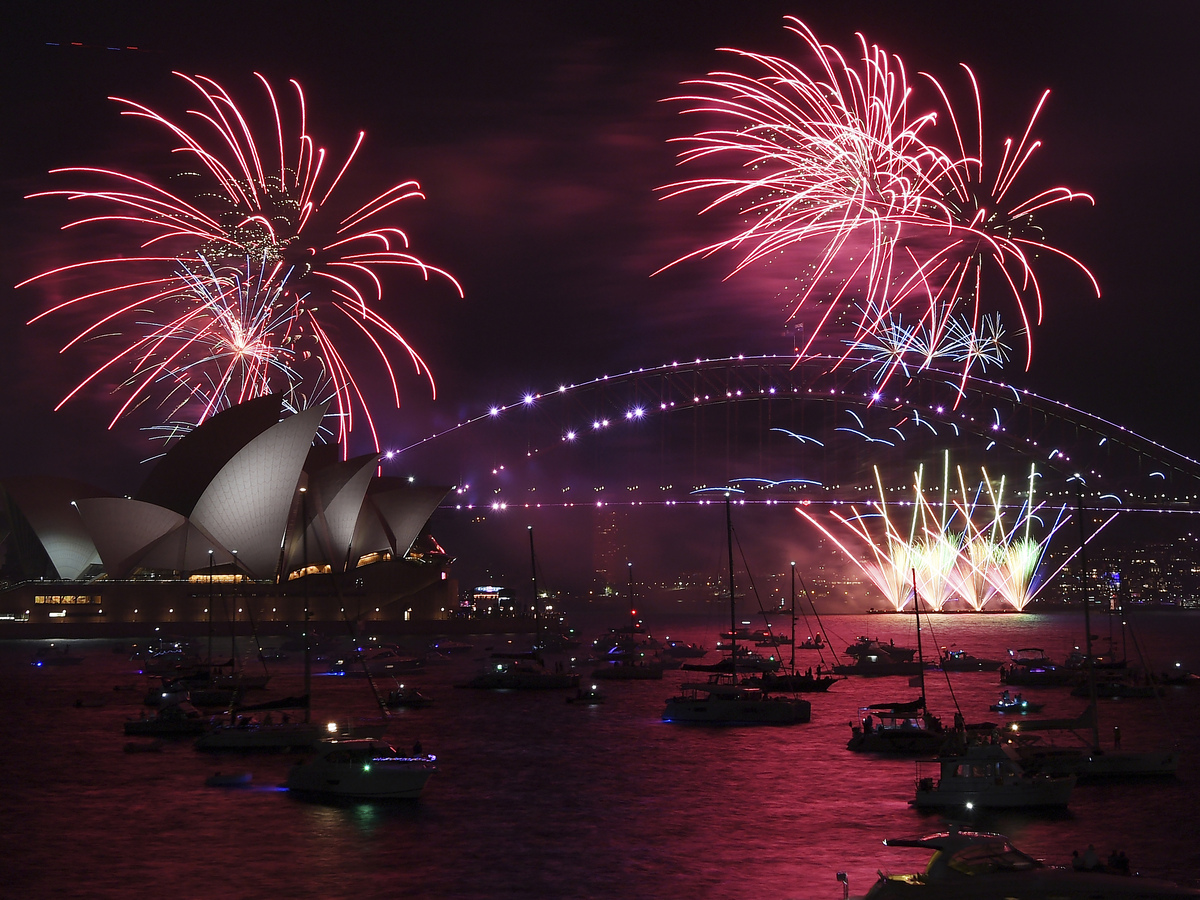 Fireworks explode over the Sydney Opera House and Harbour Bridge as New Year’s Eve celebrations begin in Sydney on Friday.

PARIS — Sorrow for the dead and dying, fear of more infections to come and hopes for an end to the coronavirus pandemic were — again — the bittersweet cocktail with which the world said good riddance to 2021 and ushered in 2022.

New Year’s Eve, which used to be celebrated globally with a free-spirited wildness, felt instead like a case of deja vu, with the fast-spreading omicron variant again filing hospitals.

At the La Timone hospital in the southern French city of Marseille, Dr. Fouad Bouzana could only sigh Friday when asked what 2022 might bring.

“Big question,” he said. “It’s starting to become exhausting, because the waves come one after another.”

The mostly muted New Year’s Eve celebrations around the world ushered in the fourth calendar year framed by the global pandemic. More than 285 million people have been infected by the coronavirus worldwide since late 2019 and more than 5 million have died.

In the United States, officials took a mixed approach to the year-end revelry: nixing the audience at a countdown concert in Los Angeles, scaling it back in New York yet going full speed ahead in Las Vegas, where 300,000 people were expected for a fireworks show on the strip.

In New York, officials planned to allow just 15,000 people — vaccinated and masked — inside the perimeter around Times Square, a sliver of the 1 million people that typically squeeze into midtown to watch the famed ball drop. Outgoing Mayor Bill de Blasio, defending the event, said people need to see that New York is open for business. 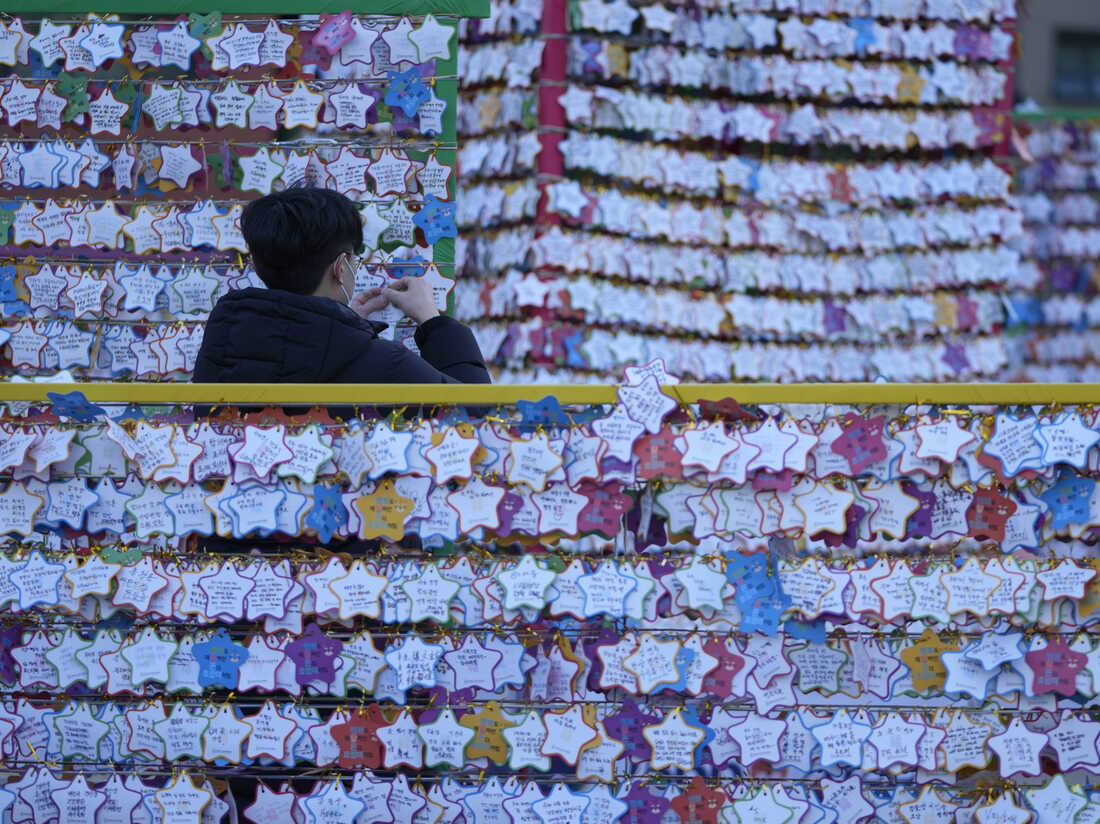 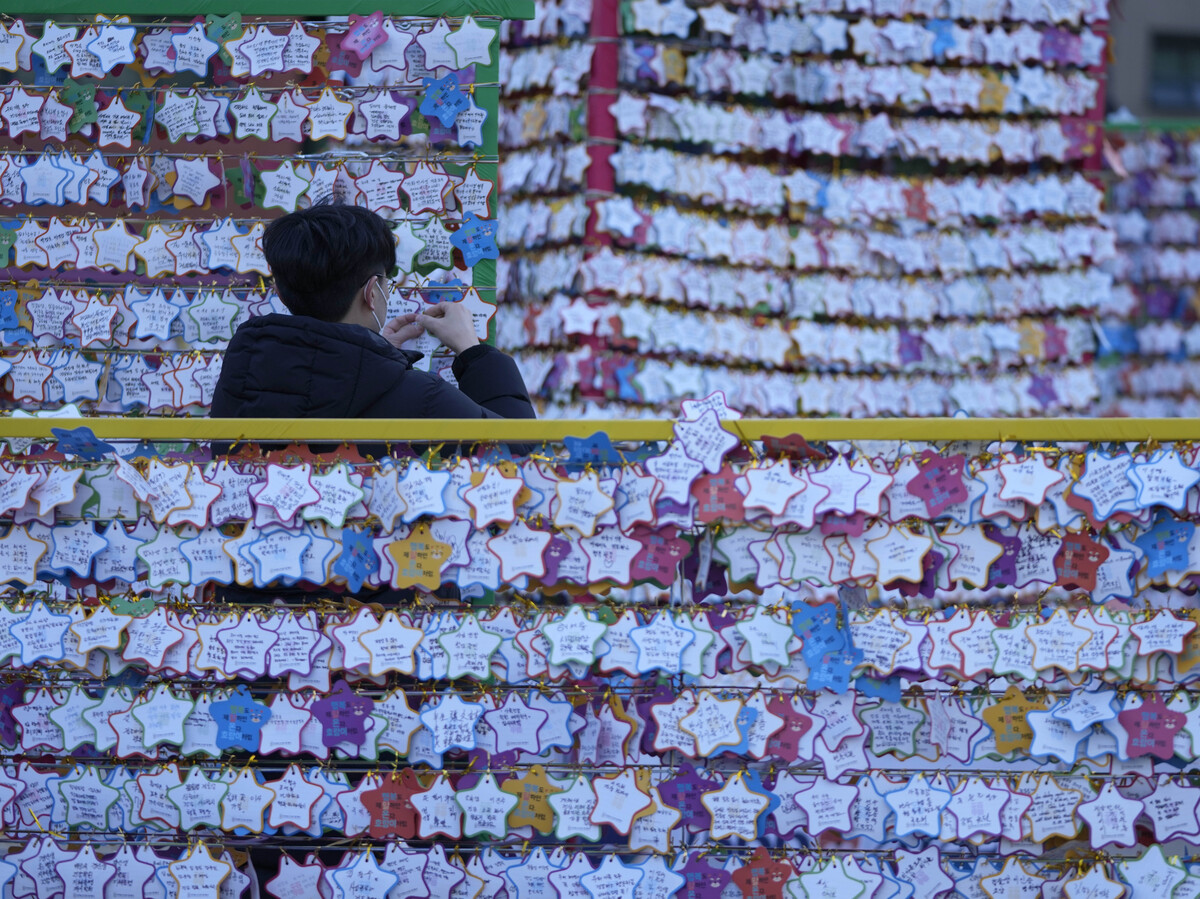 A man hangs a paper note bearing his New Year wishes on New Year’s Eve at the Jogye temple in Seoul, South Korea, on Friday.

Yet by Thursday, rapper LL Cool J had dropped out of the New York telecast after a positive COVID-19 test, The Music Man was shuttered on Broadway after lead actor Hugh Jackman tested positive, and restaurant owners battered by staffing shortages and omicron cancelations throughout the holiday season struggled to stay open.

“I’m really scared for our industry,” said restaurateur David Rabin, a partner in the Temple Bar, Skylark and other city venues who watched reservations and party bookings disappear this month. “No one made any money in December. The fact they may have a good night tonight, it has no impact.”

Airlines were also struggling as the year came to a close, canceling thousands of flights after the virus struck flight crews and other personnel. Bad weather was also to blame at times.

The pandemic game-changer of 2021 — vaccinations — continued apace. Pakistan said it had fully vaccinated 70 million of its 220 million people this year and Britain said it met its goal of offering a vaccine booster shot to all adults by Friday.

In Russia, President Vladimir Putin mourned the dead, praised Russians for their strength in difficult times and soberly warned that the pandemic “isn’t retreating yet.” Russia’s virus task force has reported 308,860 COVID-19 deaths but its state statistics agency says the death toll has been more than double that.

“I would like to express words of sincere support to all those who lost their dear ones,” Putin said in a televised address broadcast just before midnight in each of Russia’s 11 time zones. 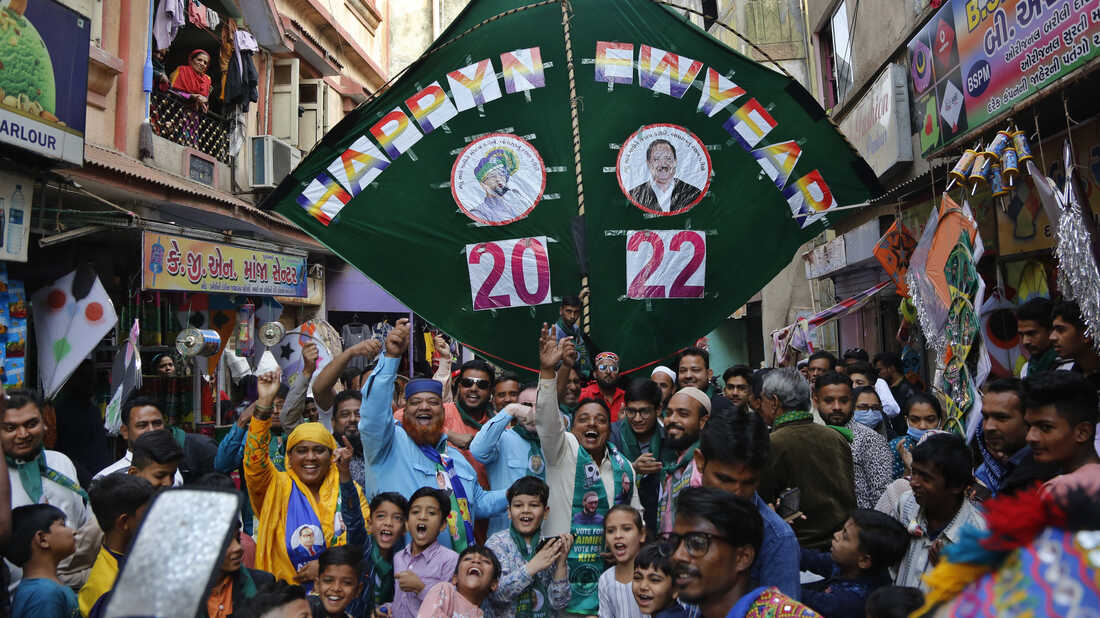 Workers of a political party and others cheer in front of a huge kite to welcome 2022 on New Year’s Eve in Ahmedabad, India, on Friday. Ajit Solanki/AP hide caption 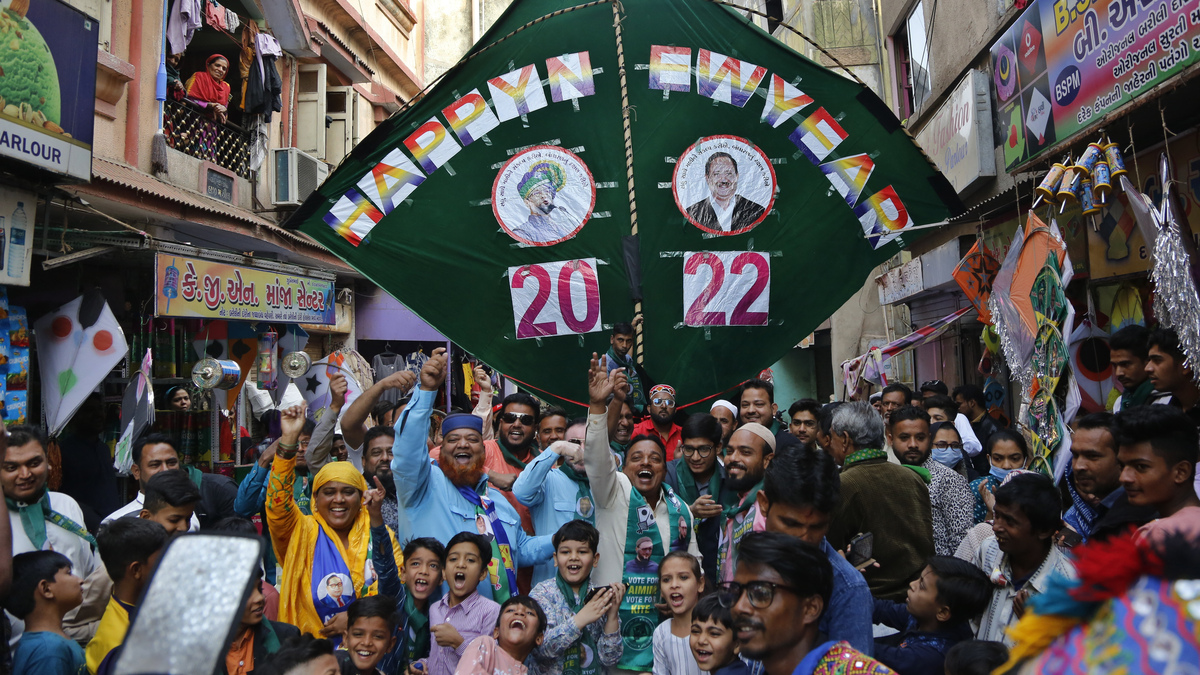 Workers of a political party and others cheer in front of a huge kite to welcome 2022 on New Year’s Eve in Ahmedabad, India, on Friday.

Elsewhere, the venue that many chose for New Year’s celebrations was the same place they became overly familiarly with during lockdowns: their homes. Because of omicron’s virulence, many cities canceled traditional New Year’s Eve concerts and fireworks displays to avoid drawing large crowds.

Pope Francis also canceled his New Year’s Eve tradition of visiting the life-sized manger set up in St. Peter’s Square, again to avoid a crowd. In an unusual move for Francis, the 85-year-old pontiff donned a surgical mask for a Vespers service of prayer and hymns Friday evening as he sat in an armchair. But he also delivered a homily standing and unmasked.

“A sense of being lost has grown in the world during the pandemic,” Francis told the faithful in St. Peter’s Basilica.

Face masks again became mandatory Friday on the streets of Paris, a rule widely ignored among afternoon crowds that thronged the sunbathed Champs-Elysées, where a planned fireworks display was canceled.

France, Britain, Portugal and Australia were among that countries that set new records for COVID-19 infections as 2021 gave way to 2022. Still, French President Emmanuel Macron expressed hope as he gave the last New Year’s address of his current term.

“Perhaps 2022 will be the year we come out of the epidemic — I want to believe that with you — the year where we will be able to see the exit from this day without end,” Macron said as he urged the unvaccinated to get the jab. 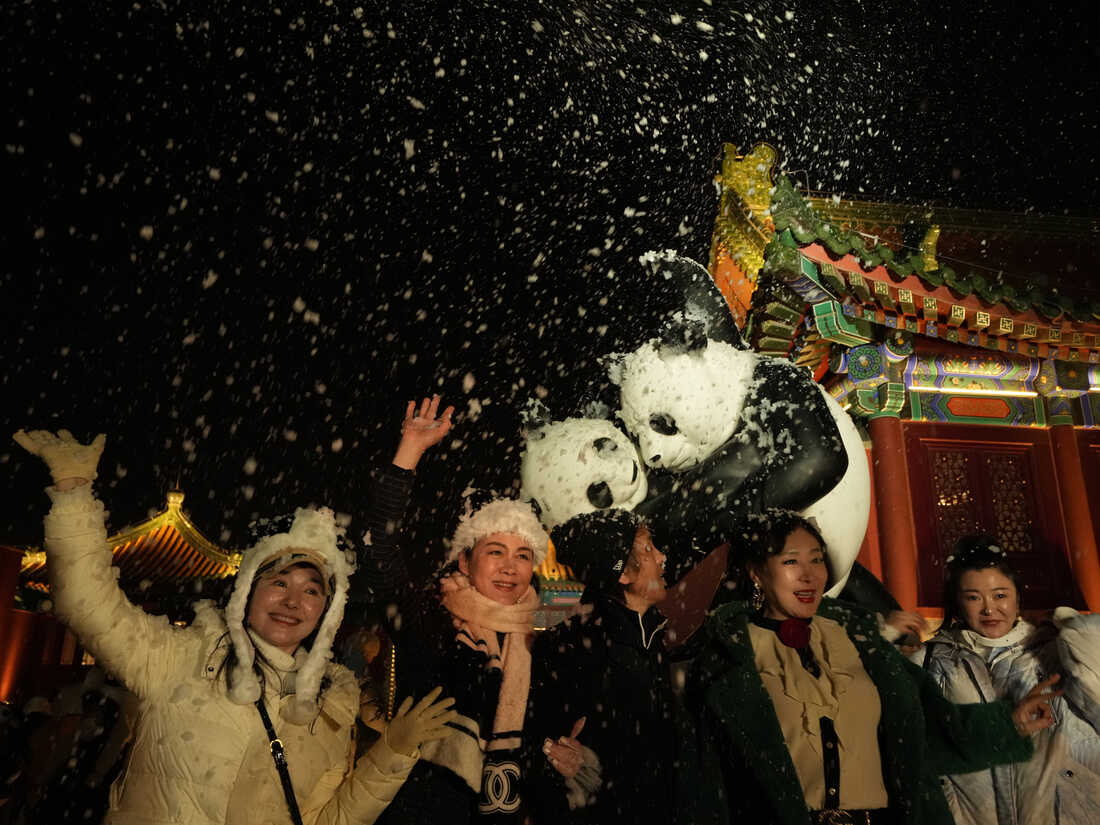 Attendees at an event that coincided with New Year’s Eve cheer as fake snow from a foam machine is blown overhead in Beijing on Friday. Ng Han Guan/AP hide caption 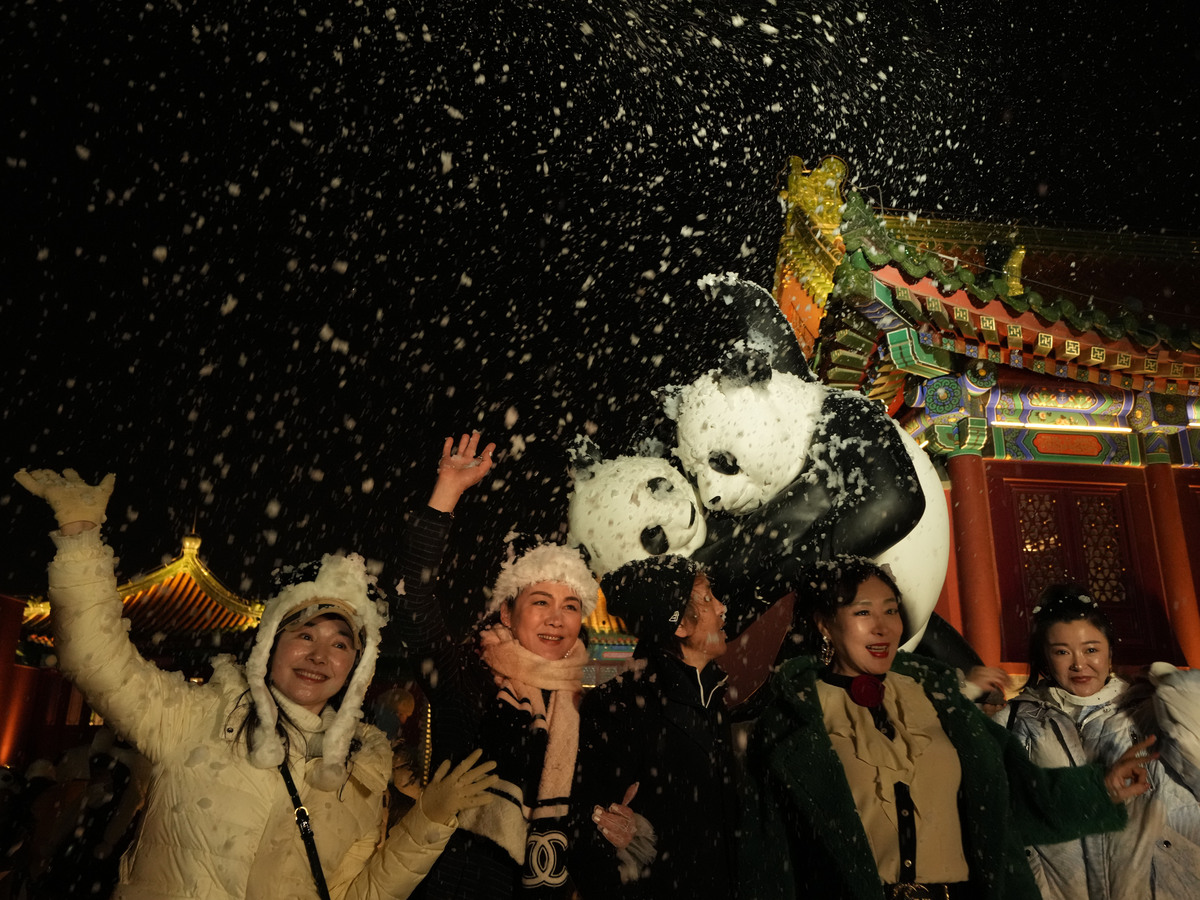 Attendees at an event that coincided with New Year’s Eve cheer as fake snow from a foam machine is blown overhead in Beijing on Friday.

France’s unprecedented 232,200 new cases Friday marked its third day running above the 200,000 mark. The U.K. was close behind, with 189,846 new cases, also a record. In London, officials said as many as 1 in 15 people were infected with the virus in the week before Christmas. Hospitalizations of COVID-19 patients in the U.K. rose 68% in the last week, to the highest levels since February.

Yet boisterous New Year’s Eve celebrations kicked off in the Serbian capital of Belgrade where, unlike elsewhere in Europe, mass gatherings were allowed despite fears of the omicron variant. One medical expert predicted that Serbia will see thousands of new COVID-19 infections after the holidays. 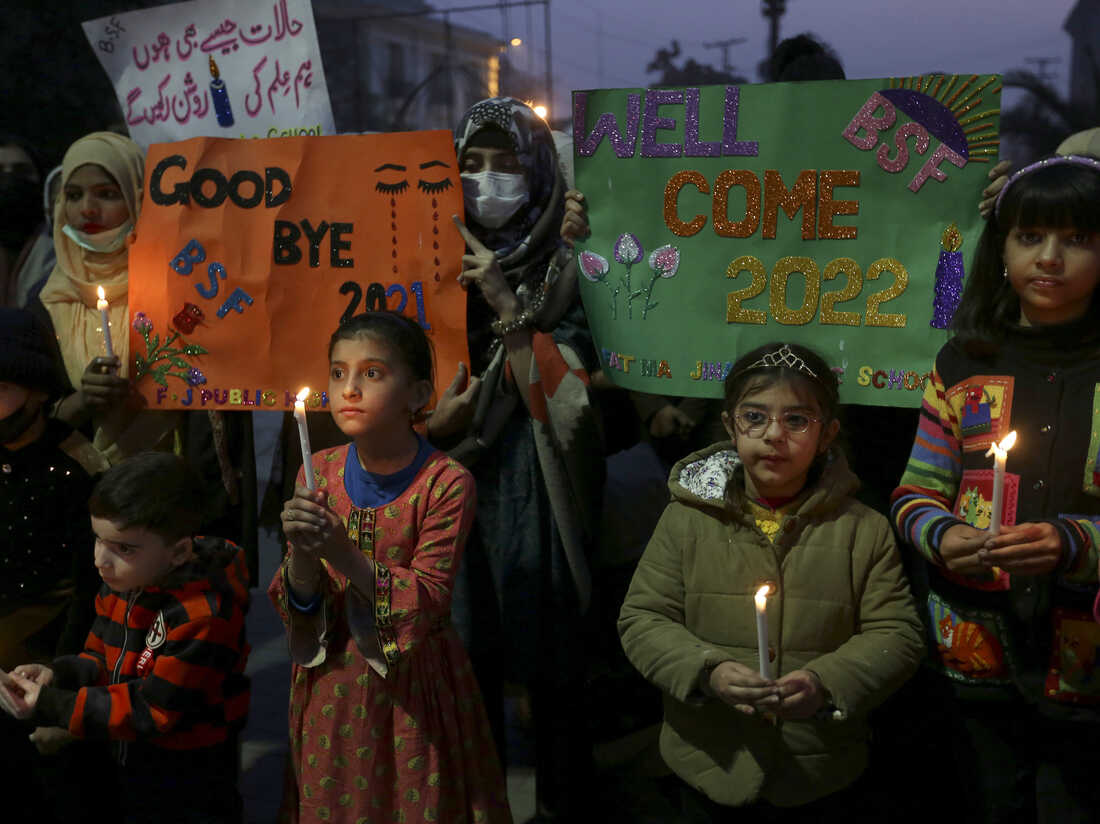 Students holds candles while participating in a demonstration to say goodbye to year 2021 and welcome in 2022, in Lahore, Pakistan, on Friday. K.M. Chaudary/AP hide caption 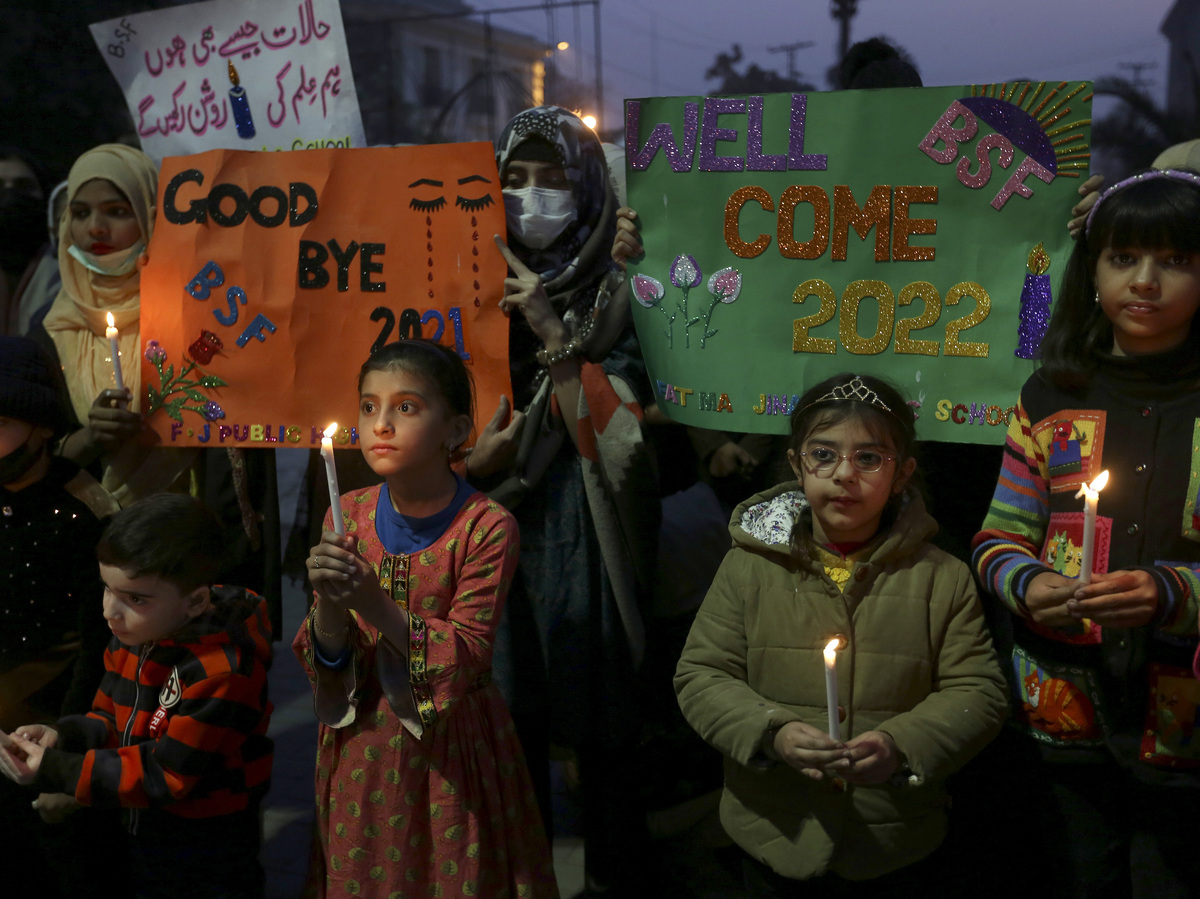 Students holds candles while participating in a demonstration to say goodbye to year 2021 and welcome in 2022, in Lahore, Pakistan, on Friday.

At Expo 2020, the sprawling world’s fair outside Dubai, 26-year-old tourist Lujain Orfi prepared to throw caution to the wind on New Year’s Eve — her first time ever outside Saudi Arabia, where she lives in the holy city of Medina.

“If you don’t celebrate, life will pass you by,” she said. “I’m healthy and took two (vaccine) doses. We just have to enjoy.”

In Florida, all four parks at Walt Disney World in Lake Buena Vista were sold out on Friday, according to the company’s website.

Australia went ahead with its celebrations despite reporting a record 32,000 new cases. Thousands of fireworks lit up the sky over Sydney’s Harbor Bridge and Opera House at midnight. Yet the crowds were far smaller than in pre-pandemic years.

In Japan, writer Naoki Matsuzawa said he would spend the next few days cooking and delivering food to the elderly because some stores would be closed. He said vaccinations had made people less anxious about the pandemic, despite the new variant.

“A numbness has set in, and we are no longer overly afraid,” said Matsuzawa, who lives in Yokohama, southwest of Tokyo. “Some of us are starting to take for granted that it won’t happen to me.”

South Korean authorities closed many beaches and other tourist attractions along the east coast, which usually swarm with people hoping to catch the year’s first sunrise. 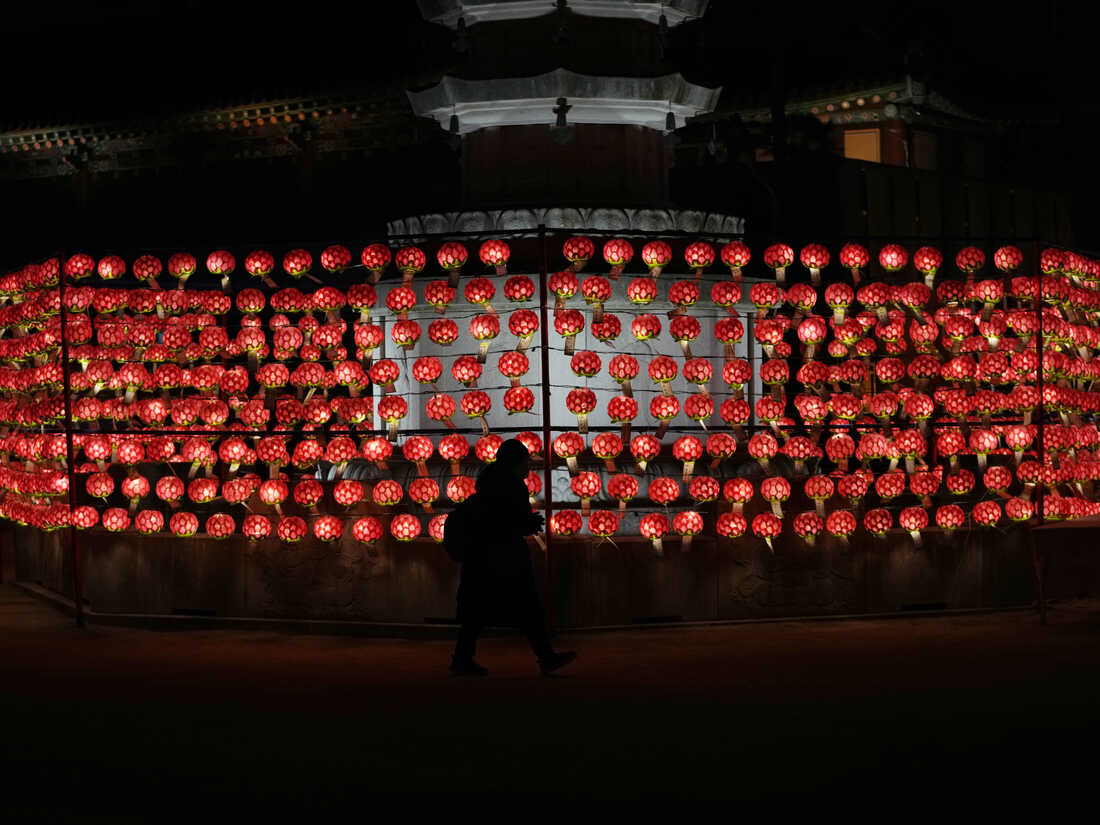 A woman prays in front of lanterns on New Year’s Eve at the Jogye temple in Seoul. Lee Jin-man/AP hide caption 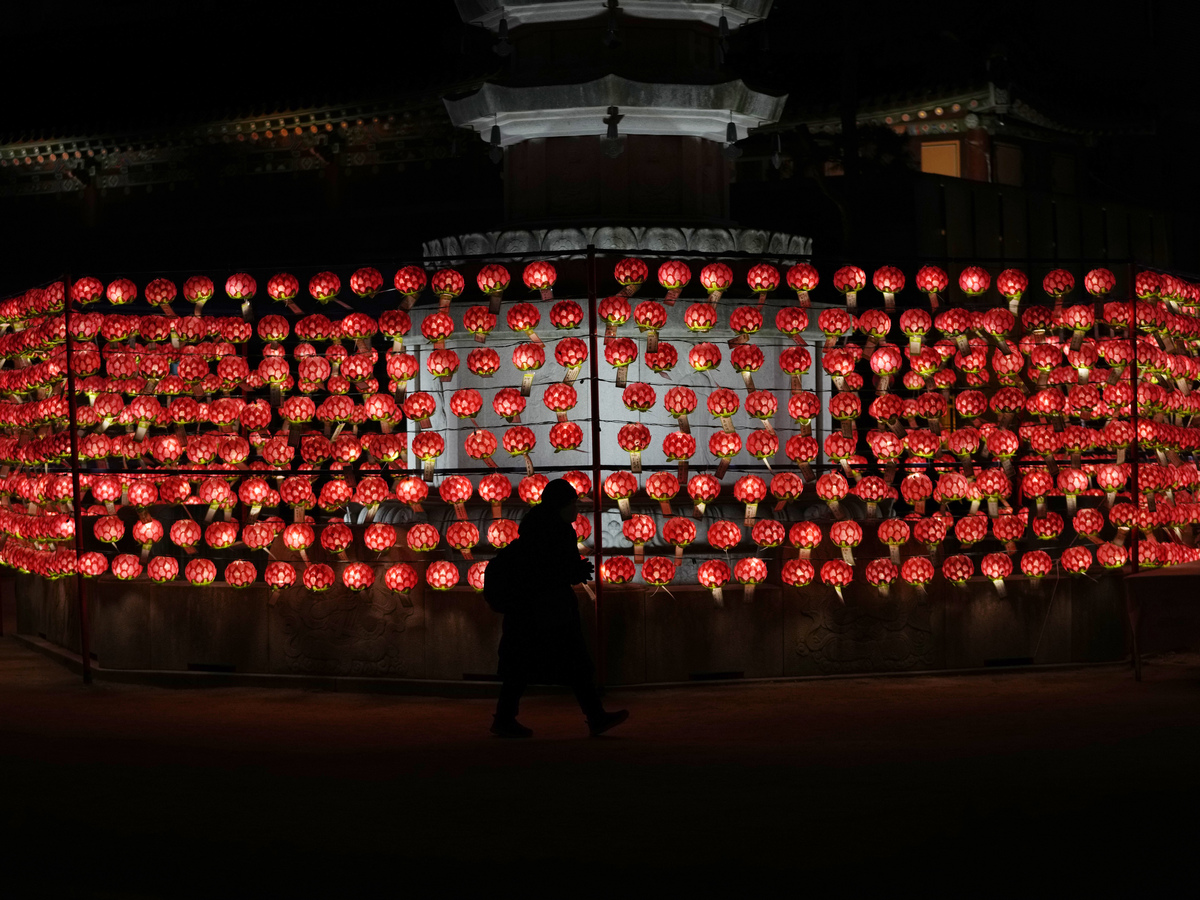 A woman prays in front of lanterns on New Year’s Eve at the Jogye temple in Seoul.

In India, millions of people rang in the new year from their homes, with nighttime curfews and other restrictions taking the fizz out of celebrations in New Delhi, Mumbai and other large cities.

In Hong Kong, a New Year’s Eve concert featuring local celebrities including boy band Mirror was the first big New Year’s Eve event since 2018, after events were canceled in 2019 due to political strife and last year because of the pandemic.

In mainland China, the Shanghai government canceled an annual light show along the Huangpu River that usually draws hundreds of thousands of spectators. There were no plans for public festivities in Beijing, where popular temples have been closed or had limited access since mid-December. 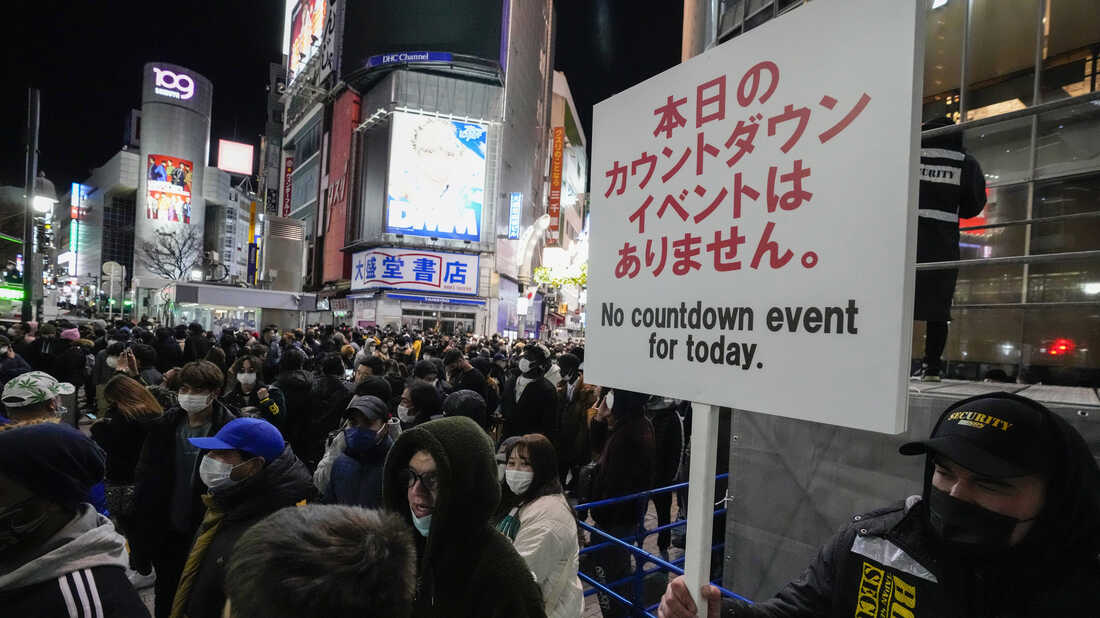 A security guard holds up a sign indicating that there is no countdown event at the famed Shibuya scramble crossing, a popular location for New Year’s Eve gathering in Tokyo as people gather to celebrate New Year’s eve. Kiichiro Sato/AP hide caption 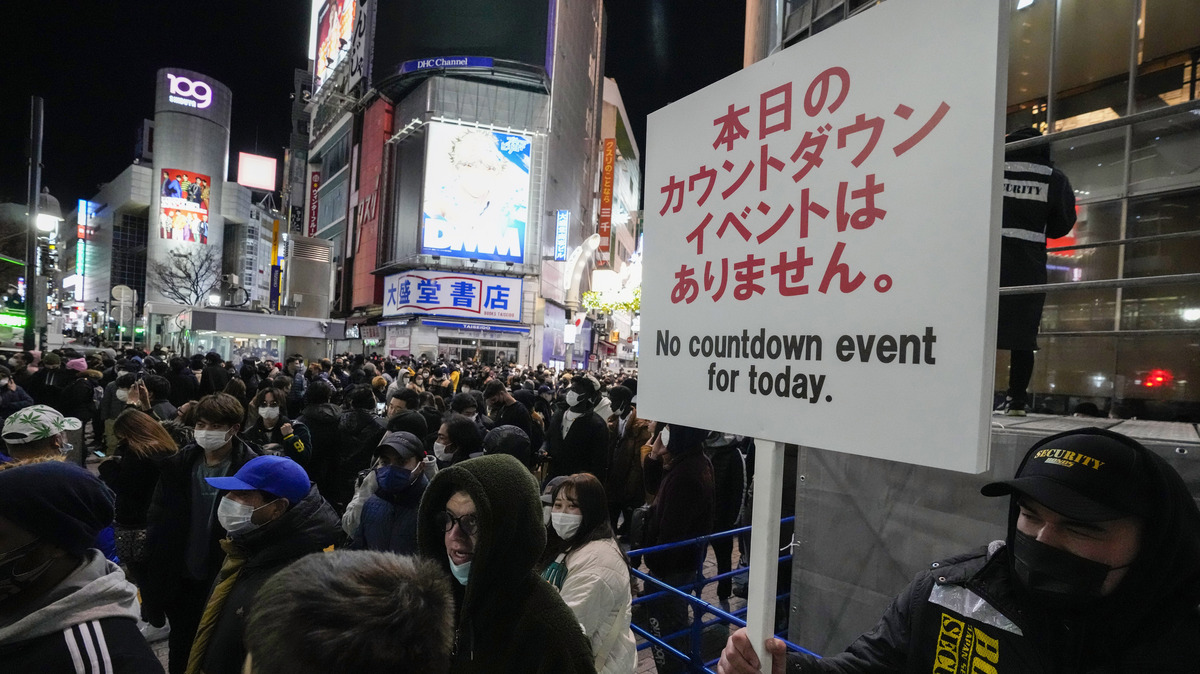 A security guard holds up a sign indicating that there is no countdown event at the famed Shibuya scramble crossing, a popular location for New Year’s Eve gathering in Tokyo as people gather to celebrate New Year’s eve.

Popular temples in the eastern Chinese cities of Nanjing, Hangzhou and other major cities canceled traditional New Year’s Eve “lucky bell-ringing” ceremonies and asked the public to stay away.

In the Philippines, a powerful typhoon two weeks ago wiped out basic necessities for tens of thousands of people ahead of New Year’s Eve. More than 400 were killed by Typhoon Rai and at least 82 remain missing.

Leahmer Singson, a 17-year-old mother, lost her home to a fire last month, and then the typhoon blew away her temporary wooden shack in Cebu city. She will welcome the new year with her husband, who works in a glass and aluminum factory, and her 1-year-old baby in a ramshackle tent in a clearing where hundreds of other families erected small tents from debris, rice sacks and tarpaulins.

Asked what she wants for the new year, Singson had a simple wish: “I hope we won’t get sick.”