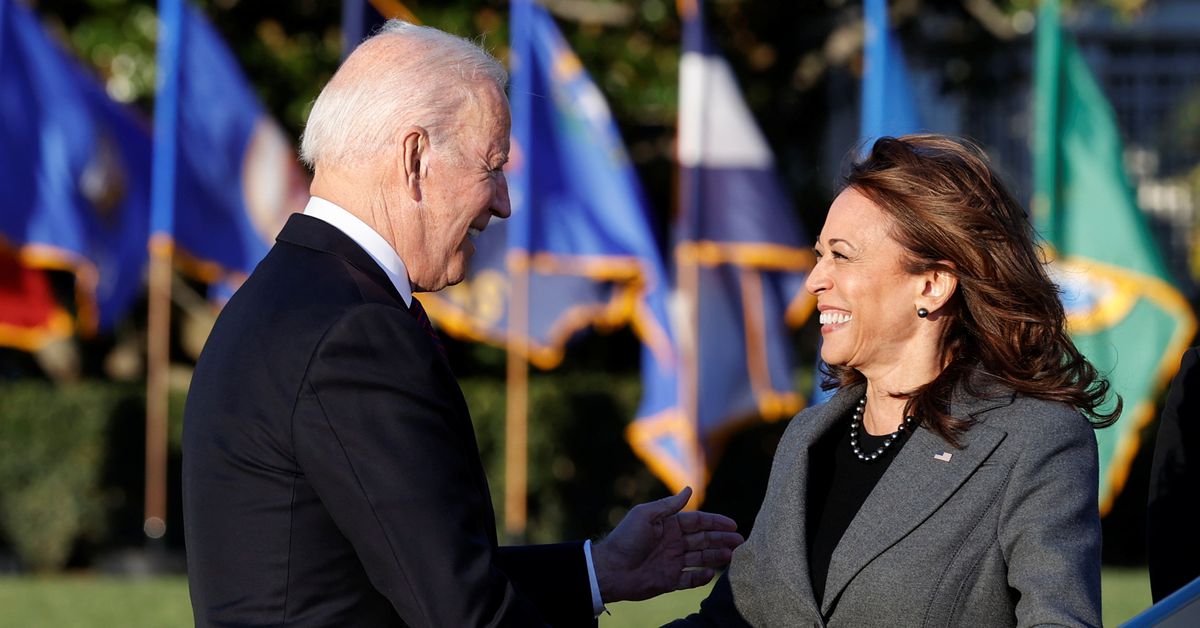 U.S. President Joe Biden and Vice-President Kamala Harris shake hands during a ceremony to sign the “Infrastructure Investment and Jobs Act”, on the South Lawn at the White House in Washington, U.S., November 15, 2021. REUTERS/Jonathan Ernst/File Photo

BETHESDA, Md., Nov 19 (Reuters) – President Joe Biden will transfer power briefly to Vice President Kamala Harris on Friday while he is under anesthesia for a routine colonoscopy, making her the first woman to hold presidential power in U.S. history.

Biden is undergoing his annual physical at the Walter Reed military hospital outside of Washington. Harris is the first woman to serve as vice president of the United States; no woman has ever been president in the country’s nearly 250-year history.

“Following the process set out in the Constitution, President Biden will transfer power to the Vice President for the brief period of time when he is under anesthesia,” White House spokesperson Jen Psaki said in a statement.

“The Vice President will work from her office in the West Wing during this time,” Psaki said.

Presidential power has been transferred to the vice president before, when President George W. Bush had colonoscopies in 2002 and 2007.

Biden, who turns 79 on Saturday, is the oldest person to take office as U.S. president. Although speculation has persisted about whether he will run for re-election in 2024, he has said he expects to seek a second four-year term alongside Harris.

Biden has pledged to be more transparent about his health than predecessor Donald Trump. The Republican visited Walter Reed in 2019 for an undisclosed reason that a former press secretary, Stephanie Grisham, later revealed was for a colonoscopy.