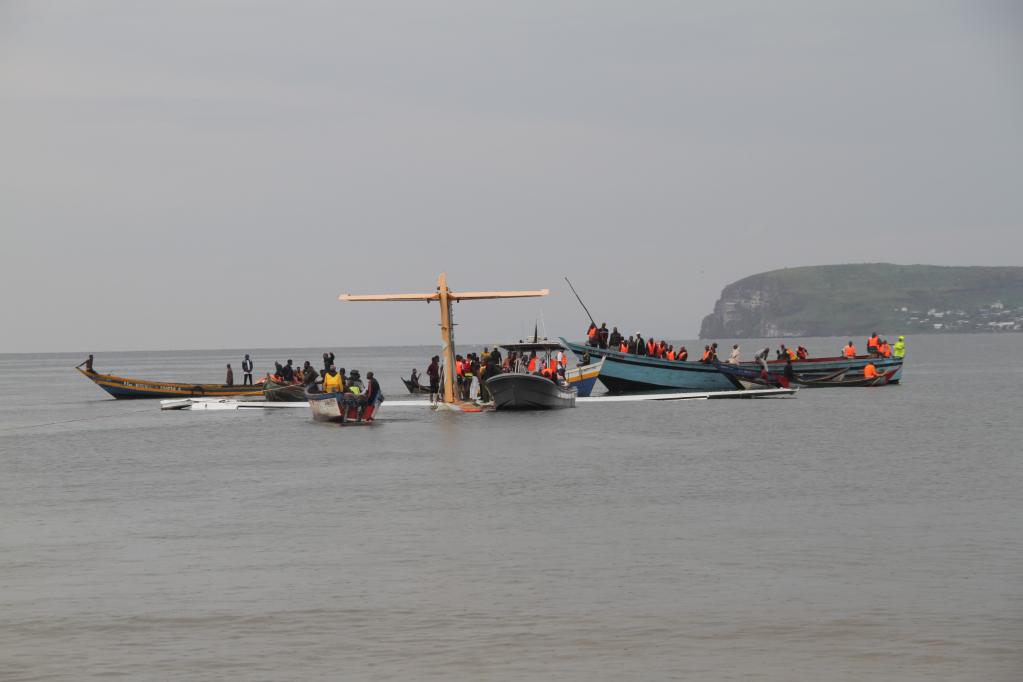 Local fishermen and rescue team members rescue passengers at the site of the plane crash in Kagera, Tanzania, on Nov. 6, 2022. (Xinhua)

The Sunday morning of November 6, 2022, will linger as an unerasable memory for Zhang Lin, a young Chinese working for the Chinese company CCCC Second Highway Engineering Bureau Company Ltd. stationed in Tanzania’s Bukoba district in the northwestern region of Kagera.

On that fateful morning, the 30-year-old woke up early in Dar es Salaam, Tanzania’s commercial hub, and drove to the Julius Nyerere International Airport where he took a flight to his Bukoba workstation.

After he had taken his seat, Zhang took a nap before he woke up at 8 a.m. only to learn that the plane had not yet touched down at the Bukoba airport as had been scheduled.

Zhang told Xinhua in an interview that according to his past experience, he should have reached his destination by 8 a.m. local time, but the plane was late in landing and kept hovering over the airport.

“Looking out through the window was a heart-stopping lightning and thunder,” said Zhang, who had joined the Tanzanian branch of the Chinese company three years ago.

He said after more than 20 minutes of circling, the plane finally started to land slowly, and the passengers on board also seemed to breathe a sigh of relief. However, he recalled that as the airport runway was getting closer and closer, a loud bang caught everyone off guard.

“When I looked up, the oxygen mask above my seat had automatically popped out. The front half of the aircraft cabin was already filled with a lot of water as the plane continued to sink. The water level in the back half of the cabin was rising rapidly as passengers shouted in terror,” said the Chinese.

He said he immediately learned that in the process of landing, the aircraft crashed into Lake Victoria about 100 meters from the airport.

“Faced with the dangerous situation, I tried to restrain my inner fear, thinking of my company’s daily safety training and emergency drills, and repeatedly told myself to calm down, and to stop panicking,” said Zhang. 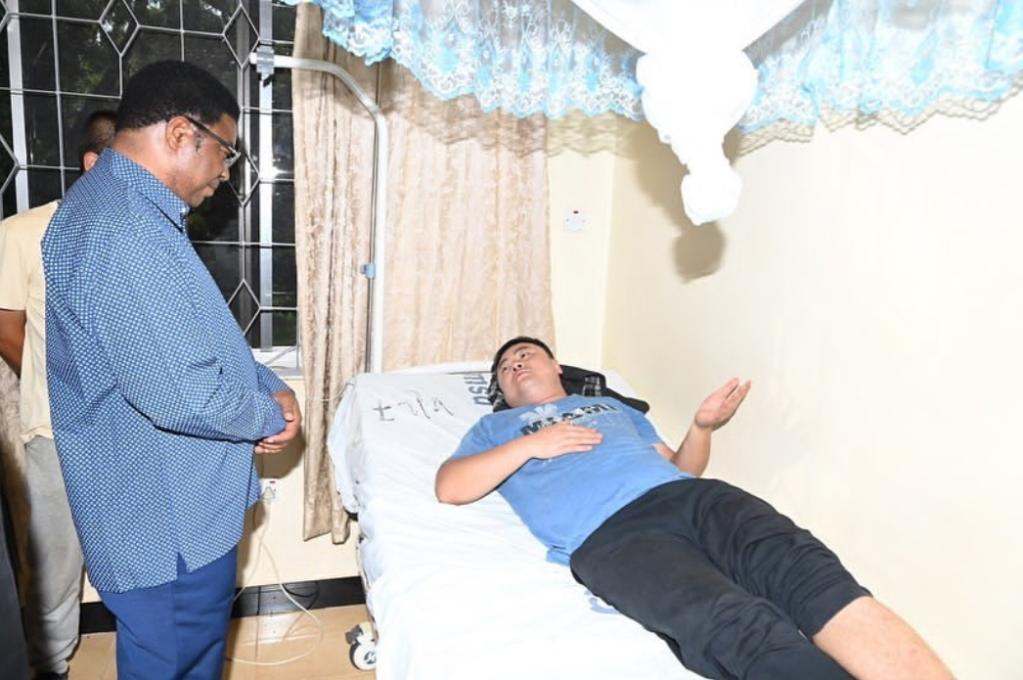 He said he took out the life jacket under his seat and put it on, and went to the emergency hatch at the back of the cabin, adding that at this time, the water level in the cabin continued to rise, already overhead.

“With my eyes into the water, breathing began to be difficult, but I knew very well that the emergency hatch is the door of life, (and it) must be opened,” he said.

Fortunately, the emergency hatch was finally opened and everyone rushed out of the hatch first. Zhang came out of the cabin and climbed onto the wing that was floating on the water.

“At that moment, I suddenly saw someone at the hatch holding a baby struggling. Although I was temporarily out of danger, the situation was critical, the baby may fall into the water at any time,” said Zhang, the only Chinese person on the plane.

“I climbed up along the wing of the plane, went around to the tail position, took the child in my arms, and returned to the wing,” he added. 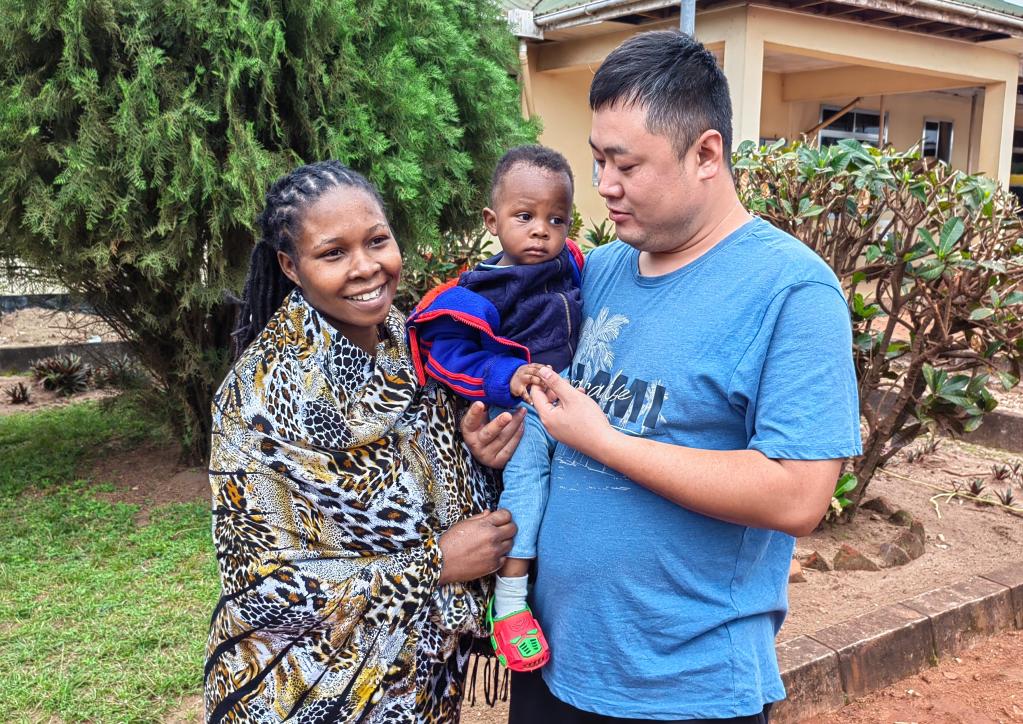 The mother (L) of the rescued baby expresses her gratitude to Zhang Lin (R) at local hospital in Kagera, Tanzania, on Nov. 7, 2022. (Photo by Du Shuai/Xinhua)

After a while, nearby fishermen arrived at the crash site, and Zhang Lin was rescued to shore in a fishing boat along with the baby and others, receiving examination and treatment at a local hospital.

He said in the afternoon of the same day, Tanzanian Prime Minister Kassim Majaliwa visited the scene of the accident to guide the rescue mission and visited him and other rescued passengers in the hospital.

The next morning, the mother of the rescued baby visited Zhang in the hospital and expressed her gratitude to the child’s savior, saying that without Zhang’s help, it was hard to imagine what terrible things would have happened.

The mother took Zhang’s cell phone number before she left, hoping to keep in touch in the future.

Ge Jie, Zhang’s other colleague, said Zhang’s calm quality and courageous spirit have deeply infected everyone, adding that through this incident, everyone’s safety awareness has also been effectively enhanced.

Li believes that Zhang’s action shows the high social responsibility of the employees of Chinese enterprises in Tanzania and their wish to become closer to the local people.

Despite having suffered minor leg bruises, Zhang’s physical and mental state was in a good condition and he has been discharged from the hospital.

Seventeen passengers and two pilots were killed after Precision Air’s aircraft crash-landed in Lake Victoria on Nov. 6 at around 8:20 a.m. local time as it approached the Bukoba airport from the Julius Nyerere International Airport in Dar es Salaam. A total of 24 people, including 22 passengers and two cabin crew members, were rescued.  ■