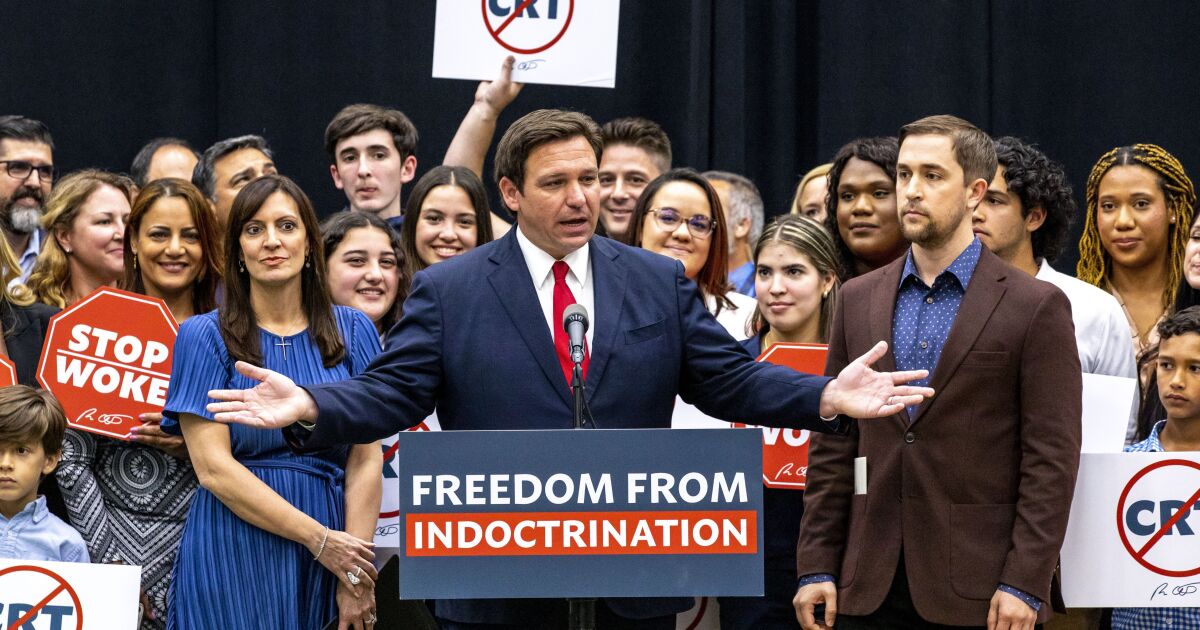 Most children, probably by the age of 10, have learned the lesson that the worst way to placate bullies is to give them what they want.

This truism apparently escaped the notice of the National Hockey League, which turned 105 in November. Otherwise, why would the NHL capitulate so cravenly to America’s outstanding political bully, Florida Gov. Ron DeSantis?

The focus of DeSantis’ bullying was an NHL job fair that was open, according to a post in the league’s LinkedIn page, to “participants aged 18 or over, based in the US, who identify as female, Black, Asian/Pacific Islander, Hispanic/Latino, Indigenous, LGBTQIA+, and/or a person with a disability.”

“Discrimination of any sort is not welcome in the state of Florida.”

The event, which is called the “Pathway to Hockey Summit,” is scheduled for Feb. 2 as part of the NHL’s All-Star Game festivities in Fort Lauderdale.

Bad choice for a venue. Scheduling an event aimed at connecting with “diverse job seekers who are pursuing careers in hockey,” as the NHL put it, was like waving a red cape in front of the Republican DeSantis, who reacts with theatrical revulsion at anything smacking of “diversity.”

“Discrimination of any sort is not welcome in the state of Florida,” his spokesman declared, “and we do not abide by the woke notion that discrimination should be overlooked if applied in a politically popular manner or against a politically unpopular demographic.”

The spokesman, Bryan Griffin, added that DeSantis called on the NHL “to immediately remove and denounce the discriminatory prohibitions it has imposed on attendance to the 2023 ‘Pathway to Hockey’ summit.”

The NHL backed down. The league removed the Linkedin post and issued a sedative statement, calling the Pathway to Hockey Summit merely an “informational and networking event designed to encourage all individuals to consider a career in our game — and, in particular, alert those who might not be familiar with hockey to the opportunities it offers.”

So much for outreach. (The league didn’t respond to my request for comment.)

First, if DeSantis is implying that the NHL was discriminating against any group not listed in its original invitation — white males, say — he must be out of his mind. It’s hard to find a professional sports league anywhere on the globe less diverse than the NHL.

Of the league’s 32 teams, how many have a Black general manager? One: Mike Grier, hired by the San Jose Sharks last year as the league’s very first Black GM.

The other major sports leagues had reached that landmark decades earlier: Major League Baseball with Bill Lucas of the Atlanta Braves in 1976 (team owner Ted Turner kept the GM title, but it was Lucas who ran the team); the National Basketball Assn. in 1972 with Wayne Embry of the Milwaukee Bucks; the National Football League in 2002 with Ozzie Newsome of the Baltimore Ravens.

The NHL in its diversity report claimed to be “working diligently to bring about a new era of inclusion, diversity, and equality in hockey,” including by hiring a full-time recruiting director “focused on attracting diverse talent to the organization.”

The report acknowledged, however, that “there is much more work to be done.”

What’s most sickening about the NHL’s craven capitulation to DeSantis is that the league is certainly big and rich enough to push back at Florida’s little tin-pot dictator. It could have stood its ground, explaining to the public its goal of diversity, maintaining the character of its outreach event and daring DeSantis to do something about it.

DeSantis might make some noise, but it’s unlikely that he would have any legal grounds to block the Ft. Lauderdale event or punish the NHL. So the league’s supine response to DeSantis’ power play (so to speak) only encourages him to swank around more as the GOP’s culture-warrior-in-chief.

Perhaps the league figured that challenging DeSantis was more trouble than it’s worth. But the seriousness of its diversity program is now cast in doubt because it backed away from a loudmouthed bully; that’s the price of giving in. And if the NHL thinks it’s made a friend of DeSantis, it should think again. Bullies don’t care about having friends, just targets.

Turning to the assertion by Griffin, DeSantis’ mouthpiece, that “discrimination of any sort is not welcome in the state of Florida,” one can only assume that this is some sort of cynical joke.

DeSantis declared in his second inaugural speech on Jan. 3 that “Florida is where woke goes to die.” In actuality, Florida is where anti-discrimination initiatives go to die.

Chief among them are initiatives aimed at protecting the rights of LGBTQ+ individuals. Last year, DeSantis’ education commissioner, Manny Diaz Jr., instructed local school officials that they were free to ignore federal guidance barring discrimination in school programs based on gender identity.

The law prohibits classroom instruction on gender identity and sexuality for students in kindergarten through third grade and forbids instruction that isn’t “age-appropriate or developmentally appropriate” for older pupils.

Those terms are undefined, which creates a chilling effect on schools and teachers, because parents are empowered to sue over their grievances and teachers could be subject to the revocation of their teaching certificates.

The Human Rights Campaign, an anti-discrimination watchdog, called the law “a shameful attack on students already struggling with the weight of discrimination” and “a slapdash, mean-spirited, impossible-to-comply-with law designed to make LGBTQ+ students feel shame and isolation at school.”

In truth, DeSantis is a nearly perfect illustration of the essayist and critic Lionel Trilling’s description of conservative and reactionary impulses. These, Trilling wrote, do not express themselves in ideas but only in “irritable mental gestures which seek to resemble ideas.”

Trilling, who was writing in the immediate postwar period and basing his conclusions on the behavior of Nazi Germany, warned that “it is just when a movement despairs of having ideas that it turns to force, which it masks in ideology.”

Indeed, DeSantis has not been shy about backing up his ideology with force. Recall his treatment last year of the Special Olympics, which made the mistake of imposing a COVID vaccine mandate on participants in its USA Games in Orlando.

DeSantis didn’t let his appointment as the Games’ honorary chairman keep him from threatening the Special Olympics with a record $27.5-million fine for its mandate.

The organization had been in the forefront of groups supporting the vaccine. It reported on its website that vaccination is especially urgent for people with intellectual disabilities, including Down syndrome, Fragile X syndrome and autism — the core of the organization’s community of participants — who are especially vulnerable to COVID-19.

Despite the threat to participants’ health and the “expert medical advice” on which its mandate had been based, the organization backed down and lifted the mandate. DeSantis canceled the fine, because he’s such a mensch.

Then there’s the governor’s highly-publicized spat with the Walt Disney Co., Florida’s largest private employer. This erupted after then-Disney Chief Executive Bob Chapek came out against the “Don’t Say Gay” law; Chapek had remained silent, perhaps hoping the law would just go away, until Disney employees demanded that the company take a stand.

DeSantis moved to revoke Disney’s quasi-governmental authority over the site of Walt Disney World. As it happens, DeSantis’ action, which won’t go into effect until this July, would endow Disney with an annual tax break estimated at $164 million and stick Orlando-area taxpayers with the bill.

If all this makes DeSantis’ ostensible fight against discrimination and “woke” corporations, whatever that means, appear to be just a pose, no kidding.

As he has been girding for a presidential run, DeSantis has not been shy about collecting political donations from rich businesses and individuals, including Duke Energy, the Seminole Tribe (owners of six of Florida’s seven tribal casinos) and hedge fund billionaire Ken Griffin — all presumably “non-woke.” But two lobbyists for Disney, the target of DeSantis’ anti-woke campaign, were among the top fundraisers for DeSantis’ inauguration events, the Washington Post reported.

The fundamental error made by the Special Olympics and the NHL was to schedule their events in Ron DeSantis’ Florida. They made themselves convenient whipping boys for his brand of performative ideology. He doesn’t even pretend to have ideas; just irritations, which he is more than willing to exploit for maximum publicity.

What business organization would put themselves in DeSantis’ crosshairs, given this record? None that has any self-respect or cares about principle, that’s for sure.