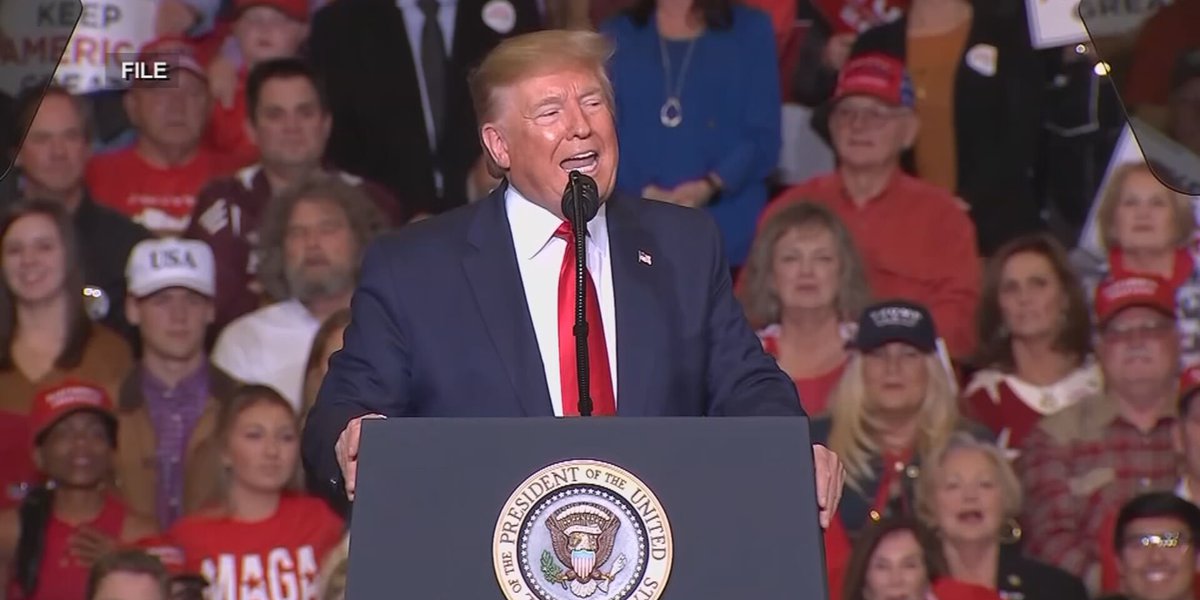 TWIN FALLS, Idaho (KMVT/KSVT) —Former President Donald Trump is making another run for presidency in 2024. The 45th president lost the 2020 General Election for U.S. President to Democrat Joe Biden, who Trump would most likely run against in 2024 However, are Idahoans experiencing Trump fatigue and like to see another choice, and what do some voters think his chances are in 2024.

Last week Trump let the world know he is running for president again, after claiming the last few years that the 2020 election was stolen from him. Something that voters heard repeatedly at Save America rallies for Trump surrogates before the 2022 Midterm Elections. At one rally in Iowa Trump said, “I ran twice. I won twice, and I did much better the second time than I did the first.”

Trump won Idaho with more than 60 percent of the vote in 2020, and a little under 60 percent in 2016. However, some here in Idaho think it would be wise for voters to look past trump in 2024

“Look, Donald Trump was a disaster as president, and that is why he lost the 2020 Election in a landslide,” said Idaho Democratic Party Executive Director Jared DeLoof.

Additionally, he thinks the 2022 Midterm Elections were an indictment on Trump, as Democrats performed better than expected and Republicans under-performed. DeLoof believes the January 6th Attacks on the nation’s capitol played a big role in how Trump surrogates under-performed in midterm races. Many of his surrogates were also 2020 Election deniers. The most notable example was Republican Kari Lake, who is also an election denier, losing to Democrat Katie Hobbs in the Arizona Gubernatorial race

“Just what a liability he is. This is now the third national election in a row that republicans have gotten creamed,” said DeLoof. “I think the folks that are raising the money, having to go to the donors and justify this are starting to realize ‘Hey, this isn’t going to work for us’.”

Additionally, some political experts have expressed a silver lining in a Trump candidacy for Democrats. Some believe Trump is the only Republican Joe Biden can beat in the 2024 Election, because he will more focused on revenge against those who deny he won the 2020 election than good policy. However some here in Idaho don’t see it that way, and point out that some of Trump’s surrogates did win competitive races. Two notable ones are Georgia Representative Marjorie Taylor Green and Colorado Representative Lauren Boebert.

Magic Valley resident Shane Klaas, who is also the host of Shane Talks Politics, said he sees a lot of positives behind Trump announcing his 2024 intentions right after midterms. Additionally, he said he too would like to see Trump tone down the rhetoric this time around, but he would rather deal with a “mean tweet” than high inflation.

“His policies in generally do expand freedom. They do expand liberty. They return a sense of smaller government, more constitutional government. That’s what I like about Trump,” Klaas said.

He adds he voted for Trump in 2016 and 2020, and would be open to voting for him again because he believes Trump has strong policies that put the country in a better direction than Biden’s policies. However he said he would be open to other Republican candidates. Some political experts have hinted at Florida Governor Ron DeSantis running for president in 2024. DenSantis, who Trump calls Ron DeSanctimonious, recently won reelection in Florida with nearly 60% of the vote over Democratic challnger Charlie Crist.

“If they can bring somebody up who is as good or better than he is, if we had a candidate who was available then I would say, great. Let’s run it in the primaries and see what happens” Klaas said.

Former president Trump is facing several civil and criminal investigations. University of Idaho professor Richard Seamon said the one that might impact him the most is the special prosecutor investigating the January 6th Attack because it is linked straight to the Presidency, and if he is indicted it could chase some of his supporters away.

“It’s been looming in the background for many years, can a president pardon himself,” said Seamon. “Nobody knows the answer to that because fortunately it has never come up.”

However he points out none of the legal problems Trump is facing can constitutionally prevent him from running for president in 2024. Seamon said the U.S Constitution lays down certain criteria like age and citizenship status. However, no state or federal law can add to the restrictions for becoming the president.

“Odd as it might seem, he could be under indictment and take office as U.S President,” Seamon said.

In a statement to KMVT IDGOP Chairman Dorothy Moon said:

In 2020, President Donald Trump earned nearly 64% of the vote in Idaho. He has obvious appeal to many Idahoans. Trump’s continued emphasis on the core issues central to improving the lives of working-class Americans, including trade, immigration, and disentangling the U.S. from perpetual war abroad, still resonate. But there are many in the Republican Party who are interested in hearing from other voices. As a rule, Republicans welcome competition and I’m sure any primary process will sharpen the skill and hone the message of our eventual nominee. In the meantime, the Idaho GOP is focused on delivering the policies that gave us a mandate up and down the state.