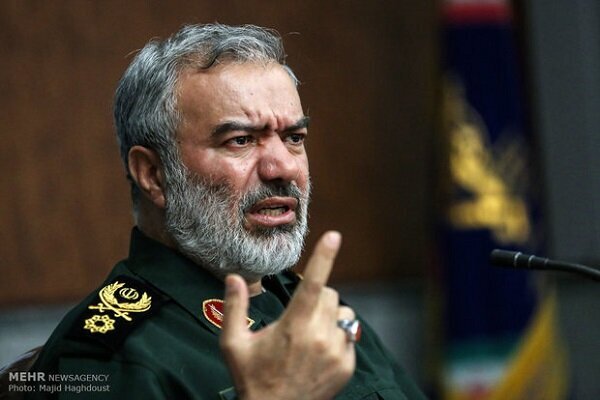 An Iranian military leader said on Tuesday that the Islamic Republic is strengthening its military infrastructure and will soon oversee the destruction of Israel and the United States.

Brigadier General Ali Fadavi, the deputy commander in chief of the Islamic Revolutionary Guards Corps (IRGC), Tehran’s chief terrorism force, said that “very soon” the world “will witness the destruction of the Zionist regime.” Iran, he said, is equipping Palestinian militant groups such as Hamas to wage war against Israel. “The Zionists,” Fadavi said, “are taking actions under the guidance of the United States, but soon the great Satan [the United States] will also be destroyed.”

Fadavi’s remarks come as Iran amplifies its threats to attack Israel and the United States amid a breakdown in diplomatic talks between the hardline regime and Biden administration. Nationwide protests in Iran also have challenged the clerical government’s grip on power, with dissidents taking to the streets to demand regime change. The Iranian government has reacted to the protests with violence, including by killing protest movement leaders. These actions have been punctuated by a more hardline foreign policy stance against Israel and the United States, which Iran sees as fueling the protest movement.

The IRGC, which is responsible for killing hundreds of Americans, is not only supporting Palestinian militant groups, Fadavi said, but also amassing the military might needed for a strike against the United States and Israel.

“What our enemies know about us is little, and they will truly understand when we use our power against them,” Fadavi said in comments carried by Iran’s state-controlled press.