Jack White is no longer on Twitter. On Sunday, the musician posted a scathing letter to Instagram explaining his decision to leave the bird app after Twitter CEO Elon Musk decided to reinstate Donald Trump’s account, two years after he was banned for his comments following the insurrection.

“So you gave Trump his Twitter platform back. Absolutely disgusting, Elon,” he wrote. “That is officially an asshole move. Why don’t you be truthful? Tell it like it is.”

“People like you and Joe Rogan (who gives platforms to liars like Alex Jones etc.); you come into a ton of money, see the tax bill, despise paying your fair share, and then think moving to Texas and supporting whatever republican you can is going to help you keep more of your money (How else could trump possibly interest you?),” he added.

White referred to the fact that Trump’s account had been initially permanently banned in 2021 due to the app’s “glorification of violence” policy following the Capitol insurrection, which was led by many of his supporters.

“You intend to give platforms to known liars and wash your hands like pontius pilate and claim no responsibility?” he wrote to Musk. “Trump was removed from Twitter because he incited violence multiple times, people died and were injured as a result of his lies and his ego, (let alone what his coup did to attempt to destroy democracy and our Capitol).” 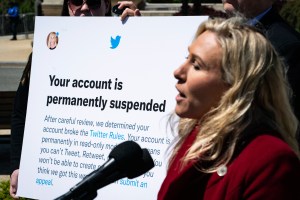 Musk reinstated Trump’s account after more than 15 million people allegedly voted in a Twitter poll, with 51.8 percent suggesting that the former president’s account should be reinstated. “Vox Populi, Vox Dei,” Musk wrote about his decision.

“That’s not ‘free speech’ or ‘what the poll decided’ or whatever nonsense you’re claiming it to be; this is straight up you trying to help a fascist have a platform so you can eventually get your tax breaks,” White wrote. “I mean, how many more billions do you need that you have to risk democracy itself to obtain it?”

White then complimented Musk’s work with Tesla, but said he had “gone too far” with his actions on Twitter, saying he was using his power “to promote horrible, violence-inducing liars, who are taking the country and the world backward and endangering the democracy that made you rich and successful in the first place.”

White continued by saying he supported free speech, but not in the way Musk sees it. “If I owned a gas station, I wouldn’t be selling the KKK gasoline to burn crosses either and then wash my hands as if I didn’t help facilitate hatred,” he wrote. “You took on a big responsibility with your purchase, and ‘free speech’ isn’t some umbrella that protects you from that.”

In a tweet, Braxton cited the uptick in hate speech as her reason for logging off. “Hate speech under the veil of ‘free speech’ is unacceptable; therefore, I am choosing to stay off Twitter as it is no longer a safe space for myself, my sons, and other POC,” she wrote.

Nine Inch Nails frontman Trent Reznor also decided to close out his Twitter, explaining his decision to The Hollywood Reporter in an interview last week. “I’m about to depart. We don’t need the arrogance of the billionaire class to feel like they can just come in and solve everything. Even without him involved, I just find that it has become such a toxic environment. For my mental health, I need to tune out. I don’t feel good being there anymore.”

Musk took the news exactly how you’d expect, by not only calling Reznor a “crybaby,” but by doing so in the replies of the infamous MAGA troll account, @catturd2. A rep for Reznor did not immediately return Rolling Stone’s request for comment, which, fair enough.