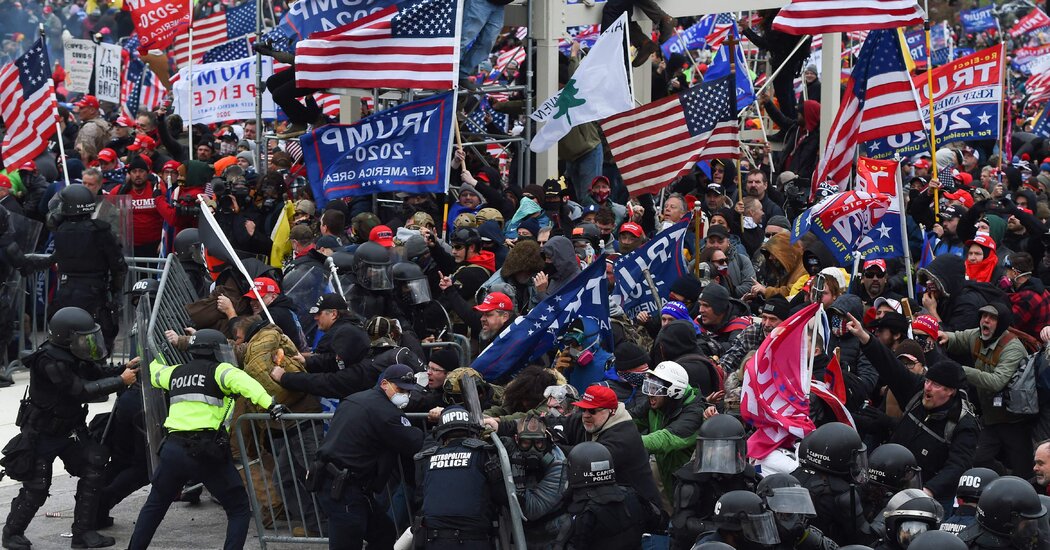 It is unclear what Mr. Epps may have said to Mr. Samsel, who was ultimately charged with assaulting police officers. Lawyers for Mr. Samsel and others charged with storming the barricade with him have asked the government for information about Mr. Epps; another defendant has asked a federal judge for permission to subpoena testimony from Mr. Epps.

During a hearing on Tuesday of the Senate Judiciary Committee, Jill Sanborn, the executive assistant director of the F.B.I.’s National Security Branch, said she was aware of Mr. Epps, but declined to give any details about who he was or what he may have been doing at the Capitol. News reports indicate that Mr. Epps is a former leader of the Arizona chapter of the Oath Keepers militia and, according to public records, he is the owner of the Knotty Barn, an event space in Queen Creek, Ariz.

Mr. Epps did not immediately respond to attempts to reach him at the Knotty Barn.

In recent weeks, some on the right have questioned why Mr. Epps has not been arrested, and suggested without evidence that he must have been working at the direction of federal law enforcement. Representative Thomas Massie of Kentucky; Representative Matt Gaetz of Florida; Representative Marjorie Taylor Greene of Georgia and, on Tuesday, Senator Ted Cruz of Texas have all pushed various forms of those claims.

Mr. Gaetz suggested last week that the attack on the Capitol should be called a “fed-surrection,” instead of an “insurrection.” Mr. Trump, in a statement, encouraged the spread of the conspiracy theory.

Representative Adam Kinzinger, Republican of Illinois and a member of the committee investigating the attack, mocked the claims on Twitter on Tuesday.

Key Figures in the Jan. 6 Inquiry

Mark Meadows. Mr. Trump’s chief of staff, who initially provided the panel with a trove of documents that showed the extent of his role in the efforts to overturn the election, is now refusing to cooperate. The House voted to recommend holding Mr. Meadows in criminal contempt of Congress.

Scott Perry and Jim Jordan. The Republican representatives of Pennsylvania and Ohio are among a group of G.O.P. congressmen who were deeply involved in efforts to overturn the election. Both Mr. Perry and Mr. Jordan have refused to cooperate with the panel.

John Eastman. The lawyer has been the subject of intense scrutiny since writing a memo that laid out how Mr. Trump could stay in power. Mr. Eastman was present at a meeting of Trump allies at the Willard Hotel that has become a prime focus of the panel.

“One more @tedcruz conspiracy down,” he wrote. “Ray Epps has cooperated and is nothing but a Jan 6 protest attendee, in his own words. Sorry crazies, it ain’t true.”

The one known F.B.I. informant who was in the crowd on Jan. 6 was a member of the far-right nationalist group the Proud Boys. But the informant was in the rear of the mob, not up front, and records about him show that he traveled to Washington at his own volition, not at the request of the F.B.I.