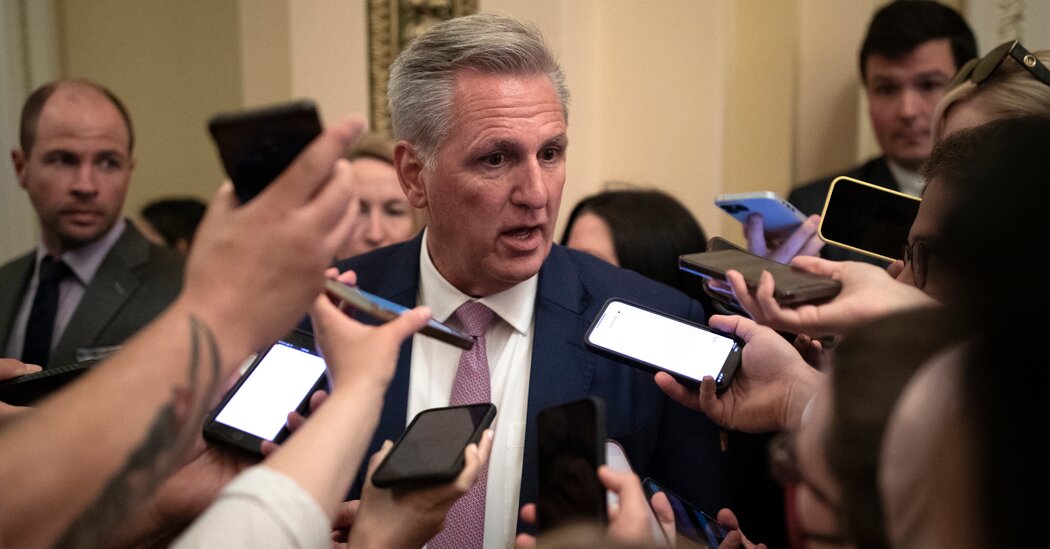 WASHINGTON — The House committee investigating the Jan. 6 attack on the Capitol issued subpoenas on Thursday to five Republican members of Congress, including Representative Kevin McCarthy, the minority leader, a significant escalation as it digs deeper into the role Republicans played in attempts to overturn the 2020 election.

The panel’s move was an extraordinary step in the annals of congressional investigations — a committee targeting sitting lawmakers, including a top party leader, who have refused to cooperate in a major inquiry into the largest attack on the Capitol in centuries.

It reflected the belief among investigators that a group of Republican members of Congress loyal to former President Donald J. Trump had played crucial roles in the events that led to the assault on their own institution, and may have hidden what they know about Mr. Trump’s intentions and actions before, during and after the attack.

Mr. McCarthy, the Californian who is in line to be speaker if his party wins the House majority in November, had a heated phone call with Mr. Trump during the riot, in which he implored the president to call off the mob invading the Capitol in his name. When Mr. Trump declined, according to Representative Jaime Herrera Buetler, a Washington Republican who has said Mr. McCarthy recounted the exchange to her, Mr. Trump sided with the rioters, saying, “Well, Kevin, I guess these people are more upset about the election than you are.”

Mr. McCarthy also told fellow Republican leaders privately days later that Mr. Trump had conceded in another phone call that he bore “some responsibility” for the attack.

The panel also issued subpoenas for other Republicans who it said played central roles in the former president’s scheme to use Congress to help him overturn the 2020 election. Representative Scott Perry of Pennsylvania coordinated a plan to try to replace the acting attorney general after he resisted Mr. Trump’s false claims of widespread voting fraud. Representative Jim Jordan of Ohio, one of Mr. Trump’s most outspoken defenders, was deeply involved in the effort to invalidate the election results.

Representative Mo Brooks of Alabama was a ringleader of the Republican effort to lodge formal challenges to the counting of electoral votes from battleground states on Jan. 6, 2021, and has said Mr. Trump has pressured him in the months since to help reinstate him to the presidency. The committee also summoned Representative Andy Biggs of Arizona, the former leader of the ultraconservative House Freedom Caucus who tried to persuade state legislators to join Mr. Trump’s push to overturn the 2020 election.

All five have refused requests for voluntary interviews about the roles they played in the buildup to the attack by supporters of the former president who believed his lie of widespread election fraud, and most continued to denigrate the committee after the subpoenas were issued.

Mr. McCarthy told reporters on Capitol Hill on Thursday that he had not yet seen the subpoena.

“My view on the committee has not changed,” he said. “They’re not conducting a legitimate investigation. It seems as though they just want to go after their political opponents.”

Mr. Perry called the investigation “a charade” and a “political witch hunt” by Democrats that is “about fabricating headlines and distracting the Americans from their abysmal record of running America into the ground.”

The subpoenas come as the committee is preparing for a series of public hearings next month to reveal its findings. The eight hearings are scheduled to take place over several weeks beginning on June 9, some during prime time in an effort to attract a large television audience.

“The select committee has learned that several of our colleagues have information relevant to our investigation into the attack on Jan. 6 and the events leading up to it,” Representative Bennie Thompson, Democrat of Mississippi and the chairman of the committee, said in a statement. “Before we hold our hearings next month, we wished to provide members the opportunity to discuss these matters with the committee voluntarily. Regrettably, the individuals receiving subpoenas today have refused, and we’re forced to take this step to help ensure the committee uncovers facts concerning Jan. 6.”

The committee’s leaders had been reluctant to issue subpoenas to their fellow lawmakers. It is a rare step for a congressional panel, other than the House Ethics Committee, which is responsible for investigating allegations of misconduct by members.

For weeks, members and investigators on the special House panel have privately agonized over how aggressively to pursue sitting members of Congress, weighing their desire for information about lawmakers’ direct interactions with Mr. Trump against the potential legal difficulty and political consequences of doing so.

Behind closed doors, committee and staff members researched the law, parliamentary rules and past precedents before deciding to proceed, people familiar with the inquiry said.

In letters to the lawmakers sent on Thursday, Mr. Thompson wrote that their refusal to cooperate had left the panel with “no choice” but to issue subpoenas.

Representative Liz Cheney, Republican of Wyoming and the vice chairwoman of the committee, said the decision was not made lightly. “It’s a reflection of how important and serious the investigation is, and how grave the attack on the Capitol was,” she said.

The subpoena to Mr. McCarthy is particularly noteworthy given his position at the top of his party. Should he refuse to comply, it could set in motion a process that could lead to a Democratic-controlled House holding him in contempt of Congress as the midterm elections loom.

The committee has thus far recommended four criminal contempt of Congress charges against witnesses who have refused to cooperate. That charge carries up to a year in jail and a $100,000 fine.

Panel members declined to comment on Thursday about whether they would recommend a charge against the sitting Republican lawmakers should they refuse to comply.

Mr. McCarthy has long feared being subpoenaed in the investigation. In recent months, he has been in discussions with William A. Burck, a longtime Washington lawyer, about how to fight a subpoena.

Congressional Republicans were deeply involved in several aspects of the plans to keep Mr. Trump in office: They joined baseless lawsuits, spread the lie of widespread election fraud and objected on Jan. 6 to certifying President Biden’s victory in multiple states.

The committee wants to question Mr. McCarthy about conversations he had after the attack about the president’s culpability in the assault and what should be done to address it. The committee has also suggested that Mr. Trump may have influenced Mr. McCarthy’s refusal to cooperate with the investigation.

Mr. McCarthy issued a blistering statement in January condemning the committee as illegitimate and saying he would not cooperate with its inquiry. He has argued that the panel was violating the privacy of Republicans through subpoenas for bank and phone records. Mr. McCarthy also denounced Speaker Nancy Pelosi of California for having rejected two of his five choices to sit on the panel, one of whom was Mr. Jordan, and boycotted the inquiry.

Ms. Pelosi added two Republicans of her choosing — Ms. Cheney and Representative Adam Kinzinger of Illinois, both outspoken critics of Mr. Trump — to the panel.

The committee informed Mr. Jordan by letter in December that its investigators wanted to question him about his communications in the run-up to the Capitol riot. Those include Mr. Jordan’s messages with Mr. Trump and his legal team as well as others involved in planning rallies on Jan. 6 and congressional objections to certifying Mr. Biden’s victory.

In the weeks after the 2020 election, Mr. Perry, a member of Congress since 2013 who is close to Mr. Jordan, compiled a dossier of voter fraud allegations and coordinated a plan to try to replace the acting attorney general, who was resisting Mr. Trump’s attempts to overturn the election, with a more compliant official. Mr. Perry also endorsed the idea of encouraging Mr. Trump’s supporters to march on the Capitol on Jan. 6.

In a letter to Mr. Biggs, the committee’s leaders wrote that they wanted to question him about evidence they had obtained about efforts by certain House Republicans to seek a presidential pardon after Jan. 6 in connection with Mr. Trump’s efforts to overturn the 2020 election.

And the panel said it wanted to question Mr. Brooks about statements he made in March claiming that Mr. Trump had asked him repeatedly in the months since the election to illegally “rescind” the results, remove Mr. Biden and force a special election so that Mr. Trump could return to the presidency.

The panel has conducted more than 1,000 interviews with witnesses, but needed to hear from members of Congress who were involved in the president’s plans, said Representative Adam B. Schiff, Democrat of California and a member of the committee, who called the subpoenas a “big step” for the inquiry.

“What I’m most concerned about is that if Republicans should ever get near the gavel, that they will overturn the next election if Trump loses again,” Mr. Schiff said, adding that more subpoenas for members of Congress were “possible.”

The Republicans could argue that their official actions — such as objecting to Mr. Biden’s victory on the floor of the House on Jan. 6 — are protected by the so-called speech or debate clause of the Constitution, intended to preserve the independence of the legislative branch.

The clause says that senators and representatives “shall not be questioned in any other place” about any speech or debate in either chamber. It has been broadly interpreted to cover all legislative actions, not just words. On its face, however, that clause is limited to questioning them in “other” places, like courtrooms.

The committee has also sought an interview with Representative Ronny Jackson of Texas, Mr. Trump’s former White House doctor, about why he was mentioned in encrypted messages from the Oath Keepers militia group, some of whose members have been charged criminally in connection with the attack.

Mr. Jackson has also refused to voluntarily cooperate, but he was not among those issued a subpoena on Thursday.

Ms. Pelosi declined to comment on the action. Representative Steny H. Hoyer of Maryland, the No. 2 House Democrat, said he was not worried about whether Republicans would try to seek revenge by issuing their own subpoenas of Democratic lawmakers if they won the House.

“We ought to all be subject to being asked to tell the truth before a committee that is seeking information that is important to our country and our democracy,” Mr. Hoyer said.