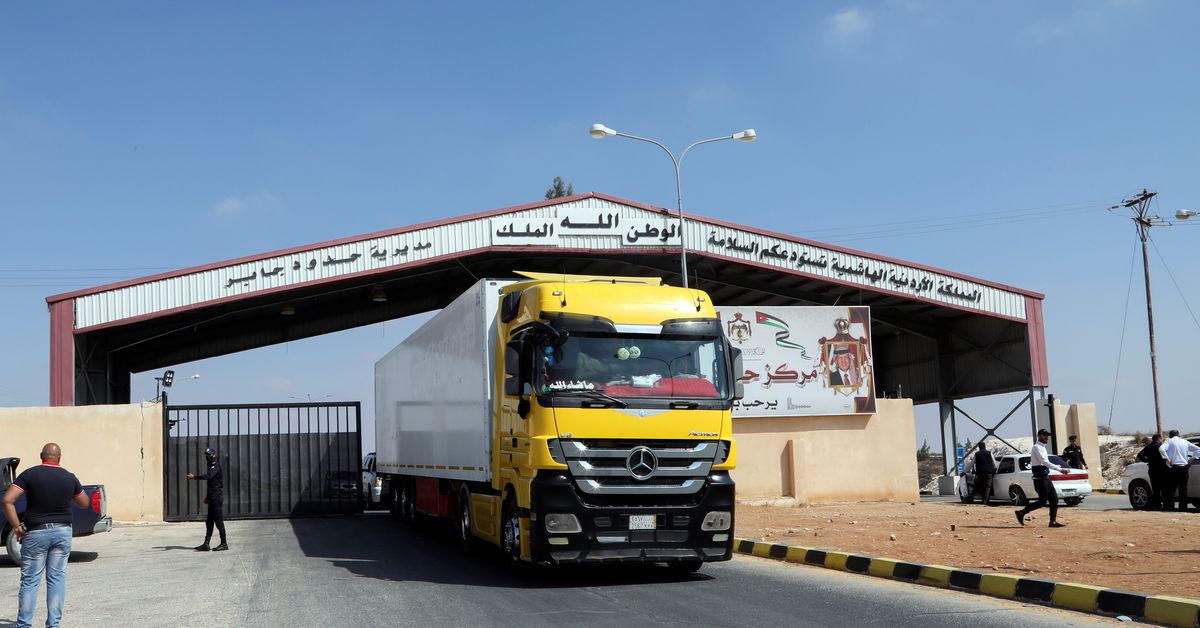 JABER CROSSING, Jordan, Sept 29 (Reuters) – Jordan fully reopened its main border crossing with Syria on Wednesday in a move to boost the countries’ struggling economies and reinforce a push by Arab states to reintegrate Syria after shunning it during its civil war.

Syrian trucks waited to enter Jordan at the Jaber border crossing and taxis carrying passengers lined up to pass through customs and immigration control.

“The security situation is now stable on the Syrian side and we hope it remains stable,” Colonel Moayad Al Zubi, the head of Jaber crossing, told Reuters.

The Jaber crossing had reopened in 2018 after the Syrian government drove rebels from the south, but the COVID-19 pandemic led to measures being imposed to curb transmission of the virus.

Syria, which blames Western sanctions for its economic problems, hopes wider business links with its southern neighbour will help it recover from a decade of war.

“The aim of these understandings is to boost trade exchange between the two countries to achieve the interests of every party,” Jordanian trade and industry minister Maha Al Ali told state-owned Al Mamlaka television.

Officials in Jordan, a U.S. ally, and Lebanon have urged Washington to ease sanctions on Syria.

“We now are feeling there is a U.S. move to give a bigger space for Jordanian businessmen to deal with Syria,” said Jamal Al Refai, vice chairman of the Jordan Chamber of Commerce.

Andre Bank, senior research fellow and Syria expert in the German Institute for Global and Area Studies think tank, said the full reopening of the border crossing was a gain for Syrian President Bashar al-Assad.

“It is another important step in the regional normalisation of the Assad regime. Within the regional balance of power between the different Arab states, the pendulum seems to be swinging more towards the pro-Assad friendly side,” Bank said.

Jordan, Lebanon, Syria and Egypt this month reached agreement for Egyptian natural gas to be sent to Lebanon via Syria using a pipeline built some 20 years ago in an Arab cooperation project.

The United Arab Emirates and Syria restored diplomatic ties in 2018.

The Egyptian and Syrian foreign ministers met on Friday on the sidelines of the U.N. General Assembly in New York, in what Egyptian media said was the first meeting at that level for about a decade.

Assad has recovered most of Syria but large areas remain outside his control. Turkish forces are deployed in much of the north and northwest, the last rebel stronghold, and U.S. forces are stationed in the Kurdish-controlled east and northeast.

Jordan and Syria hope mutual trade will return to its $1 billion pre-war level.