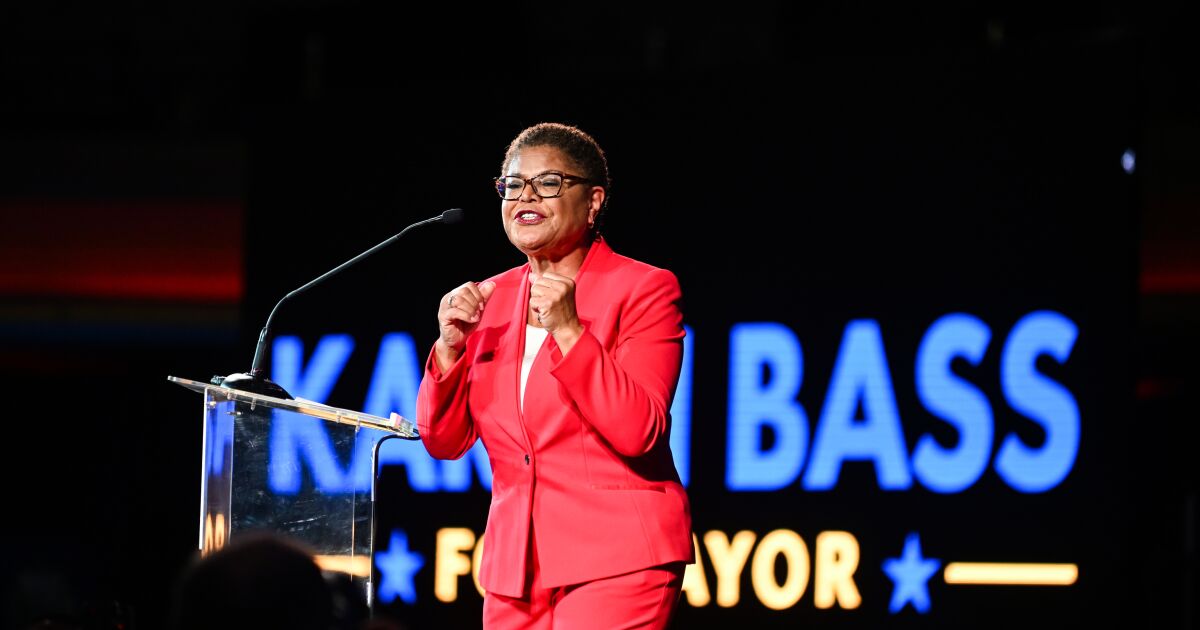 Rep. Karen Bass has defeated businessman Rick Caruso in the Los Angeles mayor’s race, according to an Associated Press projection Wednesday, making her the first woman and second Black Angeleno elected to lead the city in its 241-year history.

The 69-year-old congresswoman achieved victory despite Caruso spending more than $100 million of his own fortune on his mayoral bid, shattering local spending records and pumping previously unprecedented sums into field outreach and TV advertising.

“The people of Los Angeles have sent a clear message: it is time for change and it is time for urgency,” Bass said in a Wednesday evening statement. She learned of the news while in her Los Angeles congressional office, according to the campaign.

Her message to the city, she said, was a pledge to “solve homelessness,” “prevent and respond urgently to crime” and make Los Angeles affordable for working families.

Caruso, 63, outspent Bass more than 11 to 1 but was ultimately unable to prevail as a former Republican in a sapphire-blue California city.

Preliminary results seesawed on election night, but by early the next morning Caruso had eked out a thin lead, buoyed by support from voters who marked ballots in person. Vote-by-mail ballots processed after election day strongly favored Bass, and her margin in the race steadily grew. As of Wednesday, she was leading by just over six points.

“I’m proud of the work we did to engage long-neglected communities, giving a voice to the unheard, and to the light we shined on the biggest challenges facing our great city,” Caruso said in a concession statement. “There will be more to come from the movement we built, but for now, as a city we need to unite around Mayor-elect Bass and give her the support she needs to tackle the many issues we face. Congratulations, Karen, and God-speed.”

Caruso called Bass to concede on Wednesday evening, according to both campaigns.

Bass’ path to City Hall had begun to seem like a foregone conclusion in recent days, though more than a hundred thousand votes likely still remain to be counted. The L.A. County Registrar-Recorder/County Clerk’s office is expected to certify the results on Dec. 5.

Born in South L.A., raised in the Venice-Fairfax area and now a longtime resident of Baldwin Hills, Bass has spent her life deeply rooted in Los Angeles. Her social justice ideals have taken her from a county emergency room to nonprofit leadership and, ultimately, the halls of power in Sacramento and Washington, D.C.

Her commute will grow far shorter on Dec. 12, when the Baldwin Hills resident is sworn in to succeed Eric Garcetti as Los Angeles’ 43rd mayor.

Five years ago, there were two women on Los Angeles City Council and none held citywide office. By the end of 2022, at least five women will be seated on the council and two will hold citywide office — Bass and incoming City Atty. Hydee Feldstein Soto. At the county level, women now hold all five seats on the powerful Board of Supervisors, which historically had been overwhelmingly male.

“Los Angeles is really experiencing what I would call a moment in women’s leadership in history,” Hancock Alfaro said.

Bass will take control of a city marred by corruption scandals, with a spiraling homelessness crisis and profound inequities deepened by the COVID-19 pandemic.

Confidence in local government is seemingly at a nadir after a series of City Hall indictments in recent years, and the release of a leaked audio recording less than a month before the election that revealed top officials making racist comments and scheming to maintain political power.

In the days before the election, Bass said her first priority upon taking office would be to declare a state of emergency on homelessness and work to get people housed in a city where as many as 41,000 people sleep in tents, RVs and other makeshift housing.

The city’s first competitive mayoral race in nearly a decade was a story of contrasts, with two candidates who symbolized divergent visions of the city.

Bass, a Black woman, has spent decades in public service, evolving from an activist organizer to pragmatic elected official as she fought for incremental gains in underserved L.A. communities.

The former Assembly speaker and six-term member of Congress has a reputation as a decidedly low-key politician known for her skills as a coalition-builder.

His high-sheen candidacy — which largely focused on his easily digestible pledge to “clean up L.A.” — painted the former Police Commission president as a political outsider with the business chops to succeed where longtime politicians had failed.

Ultimately, however, it was the candidates’ disparate political histories that became the defining divide of the race.

Bass, a lifelong Democrat, built up a virtual wall of support from the Democratic establishment in the general election. Those lockstep endorsements from Democratic elected officials and clubs helped buttress Bass’ frequent contention that she was “the only Democrat” in the race to lead an overwhelmingly blue city.

The real estate developer registered as a Democrat for the first time in late January, less than three weeks before he declared his candidacy. Party history weighed less heavily during the early months of a primary defined by voter frustrations around homelessness and crime.

But Caruso’s Republican past became an inescapable albatross in the summer and fall.

This race — the first modern L.A. mayoral election to be held in an even year, synced up with state and federal elections — advanced amid an encroaching backdrop of hyper-partisan national politics.

The rancorous battle for control of Congress was never far from view, and the U.S. Supreme Court’s decision to overturn Roe vs. Wade two weeks after the June primary made abortion rights an unlikely but potent campaign issue. Caruso loudly touted his support for abortion rights throughout the race, but his past donations to antiabortion politicians and murky history on the issue lent Bass a formidable line of attack.

Caruso blanketed his campaign materials with the word “Democrat” and largely sought to avoid discussion of his partisan political evolution on the trail. But he shifted tactics in mid-October, airing a TV ad that addressed the subject head on and discussed how the Republican Party “shifted to a place that didn’t represent my values.”

His campaign hoped to replicate the success of Richard Riordan, a centrist Republican businessman whose victorious 1993 bid for mayor relied on his outsider bona fides and a then-record-breaking influx of the first-time candidate’s personal funds.

Riordan succeeded Tom Bradley, the city’s first Black mayor, who was elected in 1973 and shepherded Los Angeles through a two-decade tenure as mayor.

The 2022 race grew uglier in its final months, as both candidates fought fire with fire. Much of the bombardment centered around one of the most prominent private institutions in the city, with Bass and Caruso attacking their opponent’s relationships to scandals at USC. Caruso also hit Bass for a speech she gave praising Scientology. Bass and her supporters frequently hammered Caruso for his Republican past, with her allies branding him as a “liar” and a “phony.”

Bass became an immediate front-runner when she entered the race last fall, more than four months before Caruso.

The real estate developer built some of the region’s best-known retail centers but had little name recognition when he entered the field. Unprecedented spending and an onslaught of advertising helped Caruso surge propulsively into contention and finish second in the primary, but Bass retained her status as a robust front-runner through much of the months-long battle to succeed Garcetti.

It was only in the final weeks before the race that polling significantly tightened, as Caruso poured roughly $3 million to $4 million a week into his barrage of advertising.

Caruso aimed to run up his lead with San Fernando Valley voters, Latinos and moderates, but Bass maintained strong backing from women, liberals and registered Democrats.

Bass’ political consciousness took shape at the apex of the civil rights movement, as a young girl listening to the news before dawn each morning with her letter-carrier father.

She started her career as a nurse and physician’s assistant, working through the height of the crack cocaine epidemic as the crisis devastated South L.A. communities. Community Coalition — the politically influential nonprofit she founded — began with a living-room meeting Bass led in 1990.

Long before she became the first Black woman to lead a legislative body as California Assembly speaker, Bass’ community-based leadership frequently brought her to City Hall as an advocate pushing lawmakers from outside the system.

Now, amid fractious battles and frequent protests in council chambers, she will return to City Hall as the ultimate insider — the leader of the nation’s second-largest city.