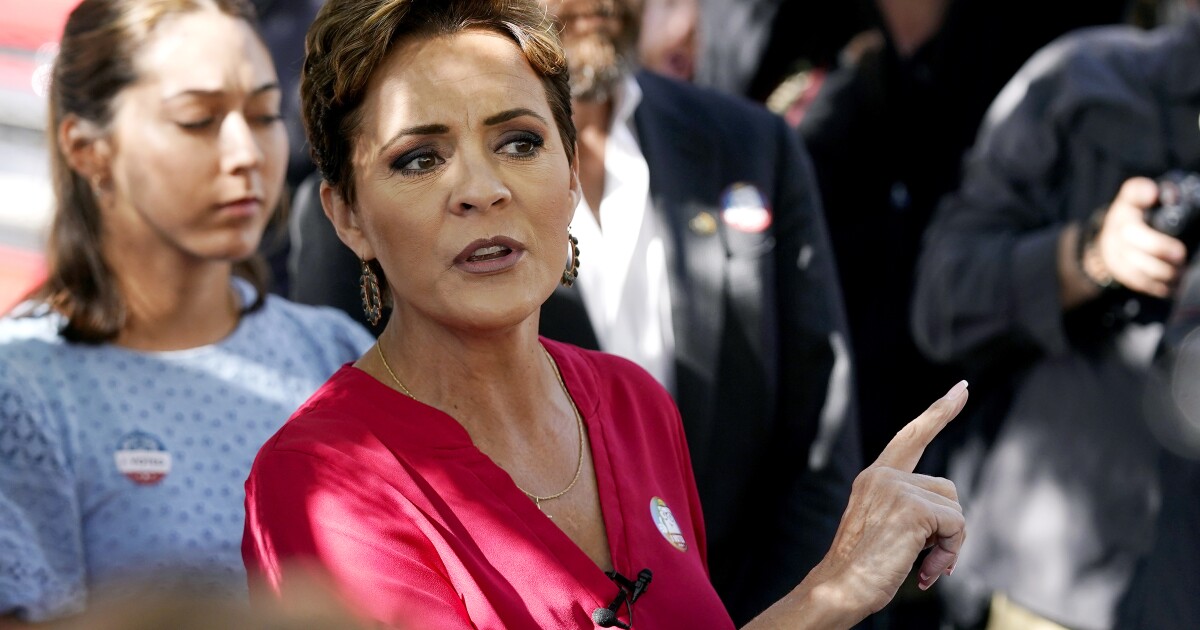 A top Arizona Democrat needled Kari Lake over reports that she is mulling a Senate run in 2024, saying that it will be difficult to do so without conceding defeat in 2022.

Lake, who lost a tight race against Gov. Katie Hobbs (D-AZ), has refused to admit defeat and fired off a number of court challenges aimed at overturning the election results. Rep. Ruben Gallego (D-AZ), who is speculated to be eyeing a 2024 Senate run himself, argued she cannot shadow-govern the state and mount a Senate campaign simultaneously due to the state’s election laws.

“Arizona has a very strict resign to run law. It’s not possible for her to be Arizona’s shadow governor and a Senate candidate at the same time,” Gallego tweeted.

Arizona has a very strict resign to run law. It’s not possible for her to be Arizona’s shadow governor and a Senate candidate at the same time. 😁 https://t.co/LGifaQAJKP

Arizona’s “resign to run” law restricts an “incumbent of a salaried elective office” from vying for another office “except during the final year of the term being served,” meaning elected officials must resign if they want to pursue another office early.

Gallego’s remark came in response to a CNN reporter’s claim that Lake is eyeing Sen. Kyrsten Sinema’s (I-AZ) Senate seat, which is up for election in 2024. Sinema flipped her party affiliation from Democrat to independent late last year in the wake of the 2022 midterm elections.

Sinema has an extensive track record of rankling liberals within the Senate Democratic caucus, including by torpedoing multiple iterations of President Joe Biden’s “Build Back Better” plan alongside Sen. Joe Manchin (D-WV). Given the 50-50 split of the upper chamber at the time, her vote was enough to stop legislation in its tracks.

Polls have shown her approval rating is underwater with Arizonans, and Sinema has been coy about her reelection plans. Gallego previously revealed that some Democratic senators “encouraged” him to run against Sinema. The move could lead to a three-way Senate race and risks splintering Democratic voters in Arizona.

Lake has peddled heavily disputed claims that malfeasance in the midterm elections deprived her of victory. A Maricopa County judge tossed out one of her cases against the 2022 election last year, but she has appealed the ruling to the Arizona Appeals Court, which is expected to hear her challenge early next month.

A final decision about whether Lake will enter the 2024 Senate fray is not expected to come until “after her court case is completed,” according to another CNN reporter.