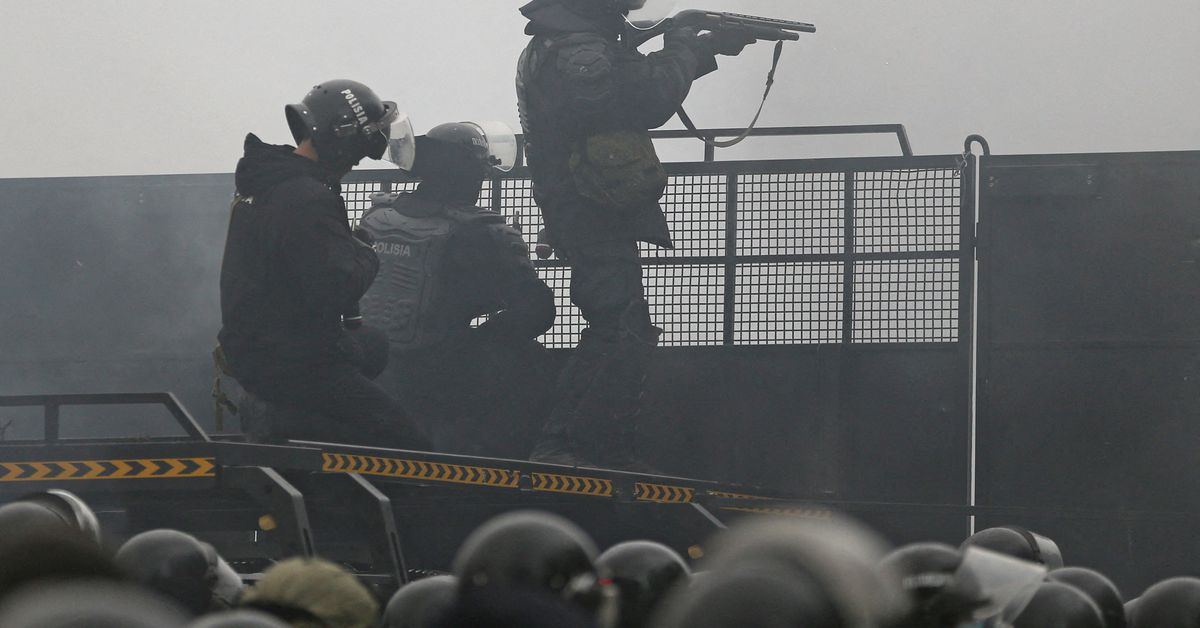 ALMATY, Jan 5 (Reuters) – Kazakhstan declared emergencies in the capital, main city and provinces on Wednesday after demonstrators stormed and torched public buildings, the worst unrest for more than a decade in a tightly controlled country that promotes an image of stability.

The Cabinet resigned but that failed to quell the anger of the demonstrators, who have taken to the streets in response to a fuel price increase from the start of the new year.

An Instagram live stream by a Kazakh blogger showed a fire blazing in the office of the Almaty mayor, with apparent gunshots audible nearby. Videos posted online also showed the nearby prosecutor’s office burning.

Earlier on Wednesday, Reuters journalists saw thousands of protesters pressing towards Almaty city centre, some of them on a large truck. Security forces, ranked in helmets and riot shields, fired tear gas and flash-bang grenades.

The city’s police chief said Almaty was under attack by “extremists and radicals”, who had beaten up 500 civilians and ransacked hundreds of businesses.

A presidential decree announced a two-week state of emergency and nighttime curfew in the capital Nur-Sultan, citing “a serious and direct security threat to citizens”. States of emergency were also declared in Almaty and in western Mangistau province, where the protests first emerged in recent days.

Authorities appeared to have shut the country off the internet as the unrest spread. Netblocks, a site that monitors global internet connectivity, said the country was “in the midst of a nation-scale internet blackout”.

Kazakhstan’s reputation for political stability under three decades of one-man rule by former leader Nursultan Nazarbayev helped it attract hundreds of billions of dollars of foreign investment in its oil and metals industries.

The price of its dollar bonds plunged by nearly 6 cents, the worst showing since the height of the coronavirus market collapse of 2020. read more

President Kassym-Jomart Tokayev accepted the government’s resignation on Wednesday following the protests, which have spread from the provinces to main cities since price caps on liquefied petroleum gas (LPG) were lifted on New Year’s Day.

Speaking to the acting Cabinet, Tokayev ordered the price hikes reversed and new caps placed on the cost of other fuels.

The unrest is the biggest test yet of Tokayev, 68, who took power in 2019 as hand-picked successor to Nazarbayev, a former Communist Party boss who had become the longest-serving ruler in the former Soviet Union by the time he stepped down. Nazarbayev, 81, still retains substantial authority as head of the ruling party and chairman of the security council.

Kazakhstan is a close ally of Russia, and the Kremlin said it expected the country to quickly resolve its internal problems, warning other countries against interfering.

Kazakh law enforcement officers are seen on a barricade during a protest triggered by fuel price increase in Almaty, Kazakhstan January 5, 2022. REUTERS/Pavel Mikheyev

The interior ministry said government buildings were also attacked in the southern cities of Shymkent and Taraz overnight, with 95 police wounded in clashes. Police have detained more than 200 people.

A video posted online showed police using a water cannon and stun grenades against protesters in front of the mayor’s office in Aktobe, capital of another western province.

The price of LPG more than doubled after the government lifted caps from Jan. 1, infuriating Kazakhs, many of whom had converted their cars to run on the low-cost fuel.

The government said the regulated price was causing losses for producers and needed to be liberalised, but Tokayev acknowledged the move had been botched.

He ordered the acting Cabinet and provincial governors to reinstate price controls on LPG, and broaden them to gasoline, diesel and other “socially important” consumer goods.

He also ordered the government to develop a personal bankruptcy law and consider freezing utility prices and subsidising rent payments for poor families.

He said the situation was improving in protest-hit cities and towns, including Almaty and the surrounding province, where the authorities declared a state of emergency.

In addition to replacing the prime minister, Tokayev also appointed a new first deputy head of the National Security Committee to replace Samat Abish, a nephew of Nazarbayev.

Nazarbayev has not convened the security council or commented on this week’s violence.

A source familiar with the situation said some workers at Mangistaumunaigas, a Kazakh-Chinese oil-producing joint venture based in Mangistau province, were on strike, although this was not affecting output.

Kazakhstan has been grappling with rising price pressures. Inflation was closing in on 9% year-on-year late last year – its highest level in more than five years – forcing the central bank to raise interest rates to 9.75%.

Some analysts said the protests pointed to more deep-rooted issues.

“I think there is an underlying undercurrent of frustrations in Kazakhstan over the lack of democracy,” said Tim Ash, emerging market strategist at BlueBay Asset Management.

“Young, internet savvy Kazakhs, especially in Almaty, likely want similar freedoms as Ukrainians, Georgians, Moldovans, Kyrgyz, and Armenians, who have also vented their frustrations over the years with authoritarian regimes.”