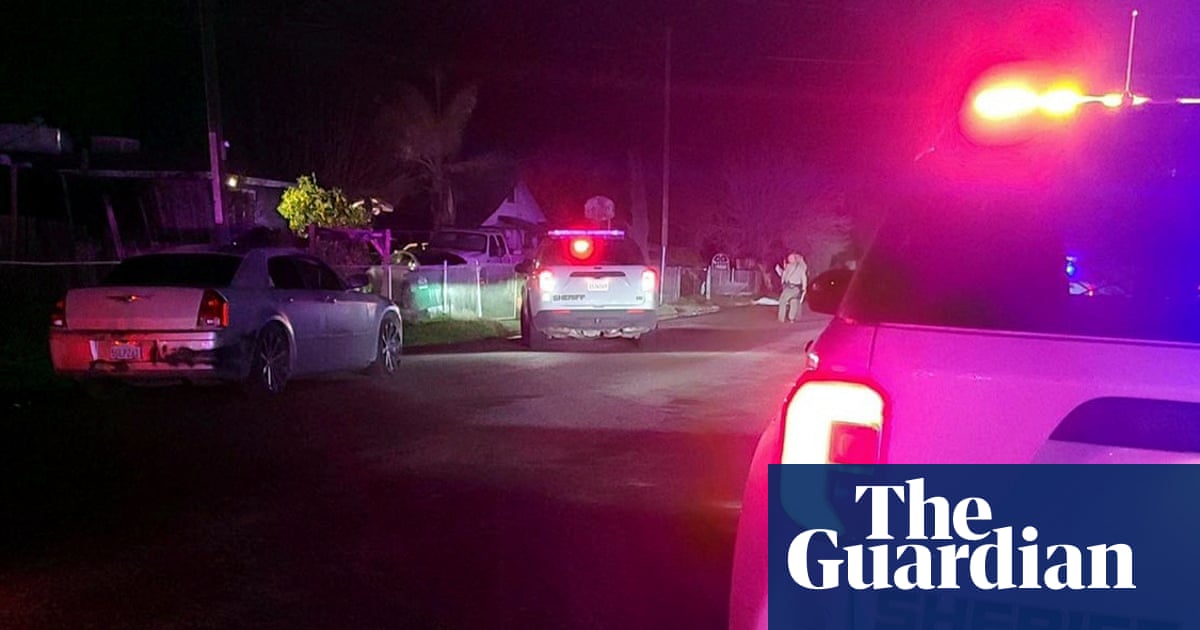 California authorities are looking for at least two suspects responsible for the “horrific massacre” of six people, including a 10-month-old baby found in the arms of his 16-year-old mother, in what the sheriff described as a targeted attack.

The killings, the victims of which were all immediate family, took place in and around a home in Goshen, in California’s main agricultural valley, in the early morning hours on Monday. The Tulare county sheriff, Mike Boudreaux, linked the violence to the illegal drug trade, saying deputies had conducted a drug-related search warrant at the same home last week and that the family was targeted: “We believe this was a message being sent.”

“None of this was by accident. It was deliberate, intentional and horrific,” he said in a press conference on Tuesday. “It is very clear this family was targeted.”

Investigators are working with state and federal law enforcement and have collected hundreds of pieces of evidence, the sheriff said.

Shortly before 4am, authorities were called to the area for a possible active shooter after multiple shots were heard. Deputies immediately found two victims dead in the street and another in the doorway of the home, the sheriff’s office said.

One victim was alive and wounded when authorities arrived but later died at a hospital, Boudreaux said.

The bodies of the infant and 16-year-old mother were located in a ditch outside the home, Boudreaux said. Both had gunshot wounds to the head, and Boudreaux said that it appeared the teen was trying to flee the violence with her son. Investigators have determined the shooter stood over the teen and her son and fired, he added.

Several others were shot in the head, including an elderly woman who Boudreaux said appeared to be shot in her sleep while in bed. Two women survived by hiding in a trailer on the property.

A third survivor was in the house at the time of the shooting and hid as he heard gunfire, lying flat on the ground with his feet against a door as the shooters rattled the knob, the sheriff said. “He was in such a state of fear all he could do was hold the door hoping he was not the next victim.”

The sheriff has pointed to the illegal drug trade, arguing that the violence could be linked to gangs or cartels.

“I’m not saying this is a cartel but also [to] be clear I am not eliminating that possibility,” he said. “These people were clearly shot in the head and they were also shot in places the shooter would know quick death would occur.”

The home was known to law enforcement, the sheriff said, and authorities had recently conducted a parole compliance check there and arrested one of the occupants, who later died in Monday’s shooting, on numerous firearms charges. Officials had seized guns, marijuana and methamphetamine from the home.

The attacks occurred in a largely Latino community of 5,400 people about midway between Los Angeles and San Francisco. The killings in the small farm community were “everyone’s worst nightmare”, said Eddie Valero, a county supervisor, in a media statement.

“These senseless acts of violence, especially with infants, children and young adults, have no place in our communities,” he said.

The small community has been rocked by the killings, which Boudreaux described as one of the most egregious cases he has seen in nearly four decades with the sheriff’s office.

Samuel Pina said on Monday that his teenage granddaughter and her baby were among those killed.

“I can’t wrap my head around what kind of monster would do this,” he told the Associated Press.

Pina said Parraz and her baby were living with her father’s side of the family in Goshen, and that her dad’s uncle, her dad’s cousin, and her grandmother and great-grandmother were also killed.

He said the family is in shock. “It comes in big waves,” he said.

Autopsies are under way and expected to wrap up on Friday. The sheriff’s office has asked that any businesses or homes in the area with cameras view their footage for anything suspicious and contact law enforcement. Boudreaux said he expects his office will identify and arrest suspects and said repeatedly that investigators know far more than they can share: “I have to be very careful and cautious because they [the perpetrators] are watching.”