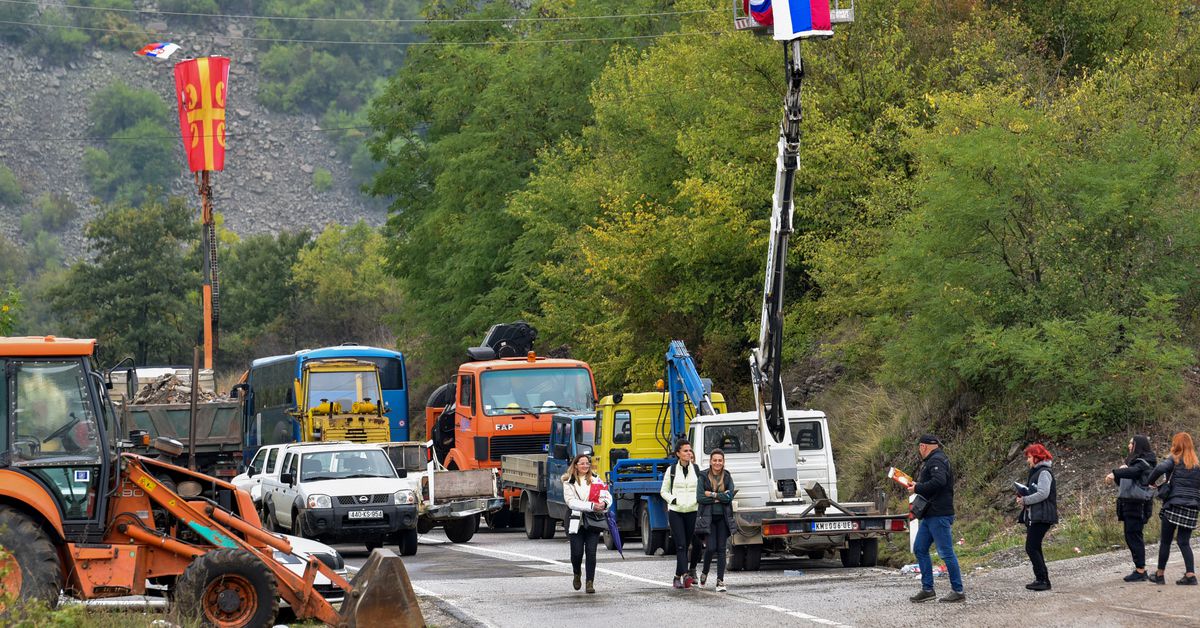 Kosovo ethnic Serbs pass through barricades near the border crossing between Kosovo and Serbia in Jarinje, Kosovo, September 28, 2021. REUTERS/Laura Hasani

BRUSSELS, Sept 30 (Reuters) – Kosovo agreed on Thursday to withdraw police units from its northern border with Serbia to end a mounting dispute over vehicle licence plates that briefly escalated into violence and prompted NATO to step up its patrols.

The accord negotiated in Brussels calms the latest flare-up in a decades-old standoff between Serbia and Kosovo but does not resolve a bigger issue blocking European Union membership talks: that Serbia and its former province Kosovo should normalise relations following Pristina’s 2008 independence.

“We have a deal,” said Miroslav Lajcek, the EU’s envoy dealing with one of Europe’s toughest territorial disputes. “After two days of intense negotiations, an agreement on de-escalation and the way forward has just been reached,” he said on Twitter, where he posted the details.

U.S. Deputy Assistant Secretary of State Gabriel Escobar was in Brussels to show support for E.U.-led talks, which he said showed the potential for more progress in the Balkans.

“I think we can make enormous strides in helping the Balkans get over a very difficult period during the ’90s and hopefully, eventually become more integrated with the European Union,” Escobar said on a briefing call with reporters.

However, Serbia’s President Aleksandar Vucic played down hopes of any broader breakthrough for now. Serbia does not recognise Kosovo’s independence.

“I think the agreement is fair for the citizens. I would like us to be able to find more lasting solutions. That would not include recognition of Kosovo,” Vucic told a news conference in Serbia, where he was hosting European Commission President Ursula von der Leyen. read more

Under the agreement, NATO troops will replace the Kosovar police units on the border, who will withdraw from Saturday. From Monday, both countries will place special stickers on car licence plates to remove national symbols and allow the free movement of citizens.

NATO has had some 5,000 troops in Kosovo under a United Nations mandate since June 1999, overseeing a fragile peace following a U.S.-led bombing campaign to end ethnic conflict.

The new agreement ends a ban instigated by Kosovo for all drivers from Serbia to show a temporary, printed registration. Pristina said its move was in retaliation for measures in force in Serbia against drivers from Kosovo since 2008.

Lajcek said he was working on a longer-term solution.

The confrontation was a reminder to the wider world of the larger Kosovo-Serbia dispute that was the EU’s to resolve, diplomats said. One senior diplomat in Brussels said the latest flare-up was, in part, an attempt to get Brussels’s attention as the process towards EU membership has stalled.

Ahead of a Balkan-EU summit on Oct. 6 in Slovenia, Reuters reported on Tuesday that the 27 member states have so far been unable to agree a declaration reaffirming their 18-year-old pledge of future EU membership for the western Balkan states. read more