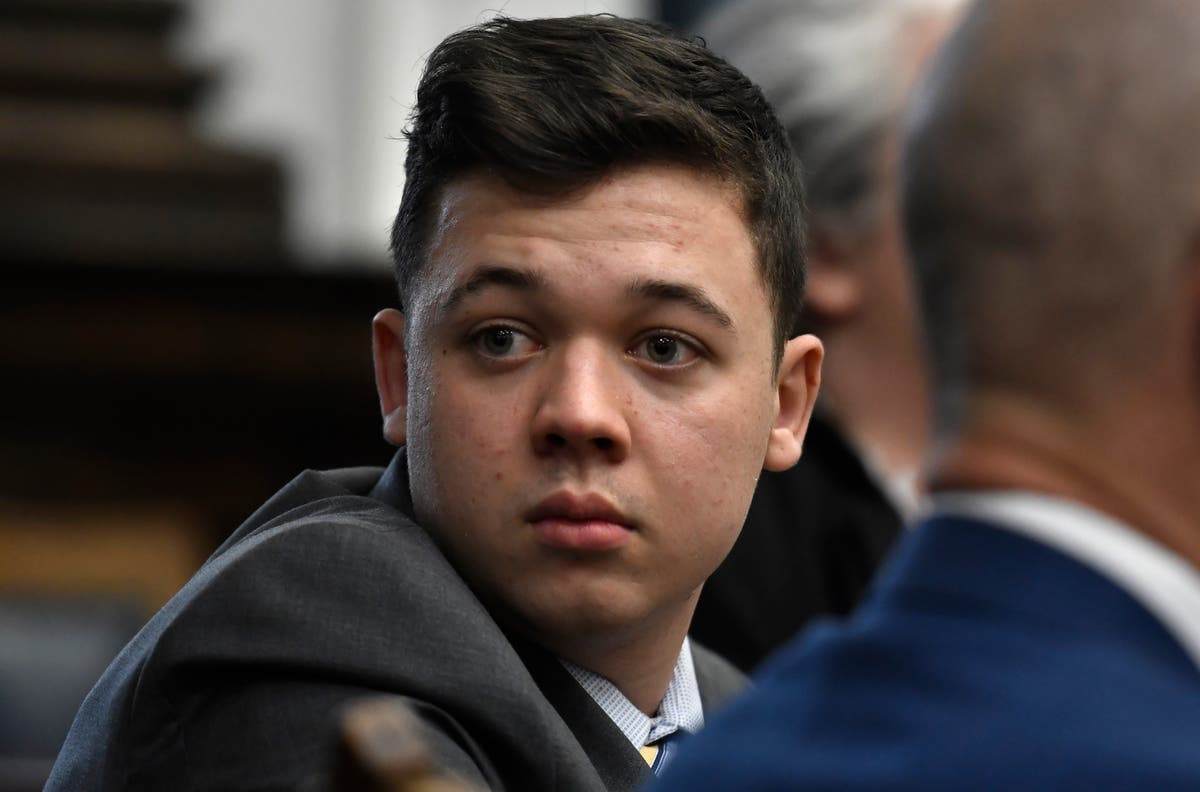 The third day of deliberation in the Kyle Rittenhouse trial ended without a verdict on Thursday, as jurors were sent home following more than 24 hours of deliberation across three days this week. Jurors will reconvene at 9am CT on Friday.

Earlier on Thursday, Judge Bruce Schroeder barred MSNBC from covering the trial inside the courthouse for the remainder of the trial, after a freelancer journalist was stopped by the Kenosha Police Department for allegedly running a traffic signal behind a bus used to transport jurors to the courthouse. Police said they believed the man tried to photograph the bus.

NBC News said in a statement that the journalist did not intend to contact or photograph the jurors and is cooperating with authorities. Police said “there was no breach of security regarding the jury, nor were there any photographs obtained”.

Mr Rittenhouse, 18, is facing five felony charges for shooting three men in the aftermath of police brutality protests in Kenosha, Wisconsin on 25 August 2020. The most serious charges are first-degree homicide for the deaths of Joseph Rosenbaum and Anthony Huber.

Defence attorneys called for a mistrial a second time on 17 November, as Mr Rittenhouse’s legal team objected to one piece of video evidence following a series of arguments about technology used to transfer and review video files.

Earlier this week, attorneys filed a motion for a mistrial with prejudice – which would mean Mr Rittenhouse cannot be tried again on the same charges – after objecting to a line of questioning from state prosecutors in cross-examination against Mr Rittenhouse during last week’s proceedings.

“Particularly when you consider all the errors in this case, we’re at a point judges will be justified in throwing the case out. Meaning there are so many errors, any one of which could normally reverse a case,” the former Donald Trump lawyer said.

“The case has become a travesty,” he added. “They commented on the 5th amendment privilege which never gets done. I ran the US attorney’s office for five years. [I was] the third ranking officer in the Justice Department for three years and I don’t remember how many cases I have tried. I don’t remember a prosecutor doing it,” he added.

Giuliani said the judge has the ability to give a not guilty verdict in this case saying the verdict was not supported by evidence.

It was after the police suggested that a freelance MSNBC journalist was following or trying to photograph jurors.

He was stopped by the Kenosha police for allegedly running a traffic signal behind a bus used to transport the jurors.

MSNBC has denied any wrongdoing.

“Last night, a freelancer received a traffic citation. While the traffic violation took place near the jury van, the freelancer never contacted or intended to contact the jurors during deliberations, and never photographed or intended to photograph them,” NBC News said in a statement to CNN.

“We regret the incident and will fully cooperate with the authorities on any investigation.”

Most unbelievable moments from Kyle Rittenhouse trial so far

From confusion over an iPad camera’s ‘pinch to zoom’ technology to the prosecutor pointing Rittenhouse’s rifle at the jury, this trial has been full of dramatic and unexpected scenes unfolding inside the courtroom.

As Kyle Rittenhouse’s fate was being decided, protesters from both the “guilty” and “not guilty” camps outside Wisconsin courthouse displayed unusual bonhomie.

The supporters of Black Lives Matter and those of Rittenhouse shared pizza together and spoke of unity as they withstood the bitter cold together despite their opposing views.

But shortly after that, a protester allegedly assaulted and was caught body-slamming a journalist. A man wearing a a “f*** Kyle Rittenhouse” t-shirt was captured on camera hitting a journalist’s camera, forcing him to back down.

Arizona senator Wendy Rogers has joined the growing list of Republican candidates, elected officials, and other influential conservatives who have backed Kyle Rittenhouse.

Rogers tweeted on Friday: “Pray for Kyle Rittenhouse and that decency prevails. Self defense is a human right.”

It comes after Republican Florida Rep. Matt Gaetz said he might offer Rittenhouse an internship.

Who is Judge Bruce Schroeder?

As the nation’s eyes remain glued to the double homicide trial of Kyle Rittenhouse, viewers have scrutinised the judge presiding over the high-profile case.

Kenosha County Circuit Court Judge Bruce Schroeder is Wisconsin’s longest-service active trial judge who, at 75 years old, has said that he has tried more homicide cases than any judge in the state.

His courtroom manner and arguments with prosecutors have drawn significant attention as the trial draws to a close.

A man who was confronted by police for carrying a rifle without a permit and hurled obscenities about Black Lives Matter protests confirmed he was a fired Ferguson police officer.

The man, who first identified himself as “Maserati Mike”, is Jesse Kline, who was a member in a police department of Missouri for three years.

He has been protesting outside the Kenosha County Courthouse for the past three days as Kyle Rittenhouse jury deliberation continues.

He first brought a rifle to the court and returned with a rifle bag and a dog the next day.

Disgraced Florida congressman Matt Gaetz weighed in on the Kyle Rittenhouse trial this week, saying he may hire the defendant as an intern.

“He deserves a not guilty verdict, and I sure hope he gets it because you know what, Kyle Rittenhouse would probably make a pretty good congressional intern,” Mr Gaetz told Newsmax. “We may reach out to him and see if he’d be interested in helping the country in additional ways.”

Meet the protesters – from both sides – outside the courthouse

Outside the Wisconsin courthouse where Kyle Rittenhouse’s fate is being decided, protesters from both the “guilty” and “not guilty” camps have withstood the bitter cold to make their opinions known.

“In the melee stand two people, barely three feet apart,” The Independent’s Sheila Flynn reports. “Ashley, 26, has flown from California in support of justice for the victims shot last year by Rittenhouse. Almost twice her age, 51-year-old Brandon – who also flew in from California — holds a handmade red, white and blue sign exhorting people to ‘Grow a pair & stop resisting arrest.’ It’s fair to say they come from opposite sides of the ideological spectrum.”

ICYMI: Journalist did not photograph or contact jurors during traffic incident, NBC says

A freelance journalist for NBC News who was cited for a traffic violation near a bus transporting jurors in the Kyle Rittenhouse trial did not photograph, contact or intend to contact the jury, according to a statement from the outlet.

Judge Bruce Schroeder has kicked MSNBC out of the courthouse for the duration of the Rittenhouse trial after police suggested he was following or trying to photograph jurors.