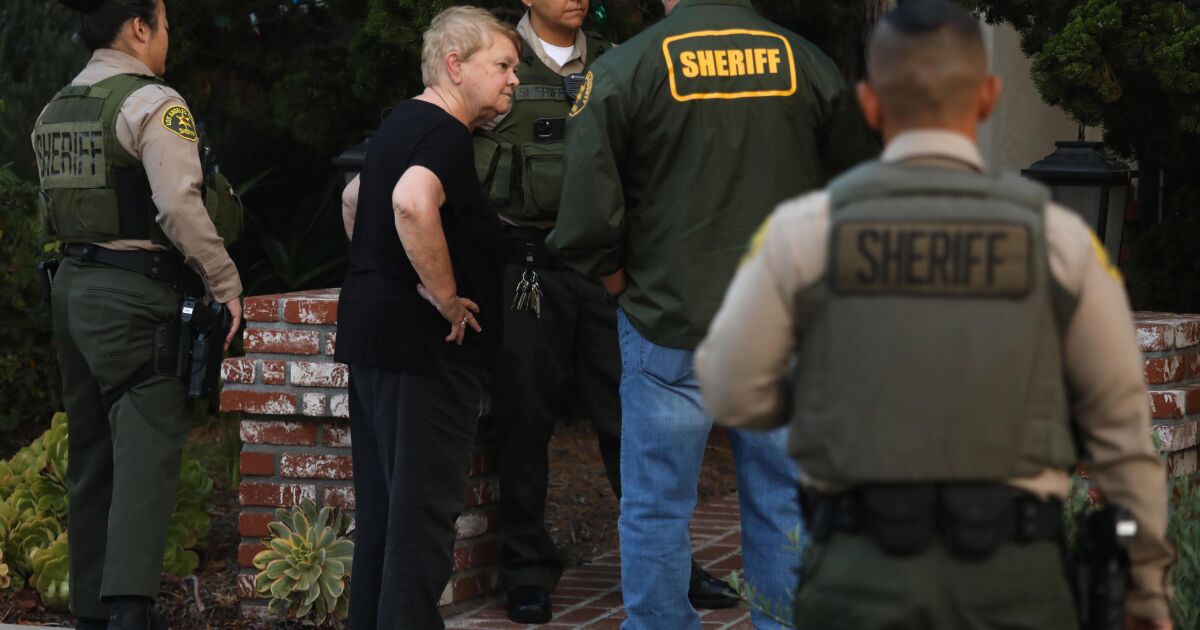 California Atty. Gen. Rob Bonta on Tuesday took control from the Los Angeles County Sheriff’s Department of a controversial criminal investigation into county Supervisor Sheila Kuehl and others, saying that sidelining the department was in the “public interest.”

Bonta’s unusual decision to strip the Sheriff’s Department of its own investigation comes amid mounting questions about the department’s handling of the probe and allegations from Kuehl and others that Sheriff Alex Villanueva is using it to attack political enemies.

In another setback for the department, a Superior Court judge also on Tuesday temporarily blocked sheriff’s investigators from searching computers and other devices seized last week from Kuehl and the Metropolitan Transportation Authority.

The actions bring an abrupt halt to the Sheriff’s Department efforts to investigate a series of contracts awarded by Metro to a domestic violence nonprofit. The investigation, which has been underway for more than a year, exploded back into public view last Wednesday when sheriff’s deputies carried out early morning raids at the home of Kuehl and Patti Giggans, the head of the nonprofit, as well as Metro’s headquarters and other county offices.

Bonta informed the Sheriff’s Department that his office had assumed control of the investigation in a letter sent Tuesday to Undersheriff Tim Murakami.

“Your department should cease its investigative activity and refrain from any actions in furtherance of these investigations, including public statements or court filings related to the investigations,” Bonta instructed.

Bonta’s letter was in response to one Villanueva sent him last week, in which Villanueva demanded Bonta open an inquiry into allegations that Kuehl and Giggans had been tipped off in advance of the impending searches.

In his letter, Bonta replied that while he would look into Villanueva’s claim, he was also taking over the department’s investigation into Giggans’ charity.

He ordered Murakami to “please have your department staff transmit all evidence, investigative reports, and information to” two agents in Bonta’s office.

“In recent days, the public unfolding of an unprecedented investigation has raised serious questions for residents of Southern California and beyond,” Bonta said in a statement. “I recognize the deep uncertainty this has engendered and, given the unique circumstances, my team has committed to taking over this investigative process. Make no mistake: We are committed to a thorough, fair, and independent investigation that will help restore confidence for the people of our state. If there is wrongdoing by any party, we will bring it to light.”

How Bonta’s move will impact rulings in the case by Los Angeles County Superior Court Judge William Ryan was not immediately clear.

On Friday, Ryan issued an order temporarily barring the department from examining computers that investigators had seized from Metro’s Inspector General after lawyers for the Inspector General challenged the validity of the search warrant used in the raid. Lawyers for Kuehl and Metro then filed similar challenges and Ryan extended the ban to any devices taken from them.

The judge stopped short of granting a request from attorneys for Kuehl and Metro that he find the search warrants sheriff’s investigators obtained invalid and order the Sheriff’s Department to return the seized property. The validity of the warrants, he wrote, would be decided after hearings with lawyers for the Sheriff’s Department and those targeted in the investigation.

In urging Ryan to toss out the warrants altogether, a lawyer for Kuehl likened the raid on the supervisors home to “a scene straight out of ‘L.A. Confidential.’

“The Los Angeles County Sheriff’s Department executed a politically motivated and retaliatory early-morning raid at the home and office of Los Angeles County Supervisor Sheila J. Kuehl, one of the fiercest and most vocal critics of Sheriff Alex Villanueva,” the attorney, Cheryl O’Connor, wrote in a court filing.

Kuehl’s lawyers asked that a special master be appointed to go through the material to separate out privileged communications, something the judge indicated he would consider.

“It seems to the court that temporarily delaying the Sheriff access to the computers and devices seized, which may contain privileged communications, while the court considers appointing a special master, works little to no prejudice to the investigation,” Ryan wrote.

Before attorneys for Kuehl and Metro filed challenges to the warrants on Monday, sheriff’s officials authorized investigators to log overtime hours over the weekend to cull through the electronic devices seized last week, a law enforcement source told The Times.

Ryan set a hearing for Thursday to discuss the challenges to the warrants and whether his decision to block sheriff’s investigators should remain in place. In a series of questions Ryan said he wanted answered at the hearing, he asked why investigators had kept key details about the case from the judge who issued the warrants used in the raids last week.

That judge, Craig Richman, has a decades-long relationship with Mark Lillienfeld, a key investigator in the sheriff’s public corruption unit. Lillienfeld’s involvement in last week’s warrants is unclear.

The evidence investigators presented to Richman made clear they were focused on a series of contracts worth more than $800,000 that Metro awarded to the nonprofit between 2014 and 2020 to operate a hotline for reporting sexual harassment on public transit. The statement says that the hotline was a “complete failure” but that the contract was still extended without a competitive bid or analysis.

Both Kuehl and Giggans, who also serves on the Sheriff Civilian Oversight Commission, have clashed fiercely with Villanueva and have called for his resignation. Giggans’ home and nonprofit offices were also searched. They both have denied wrongdoing.

Kuehl last week called the allegations “totally bogus,” saying she “didn’t know anything about the contract” and that the Board of Supervisors did not vote on whether to approve it.

Villanueva said he has recused himself from the investigation in order to avoid conflicts of interest. But he has discussed the investigation in recent news interviews and used it as fodder on the social media accounts for his reelection campaign for sheriff, declaring: “L.A. Political Establishment borrows a page from Donald Trump’s playbook to discredit the corruption investigation into Supervisor #SheilaKuehl.”

He also posted a photo of Jennifer Loew, a former Metro employee who alleged she was targeted for retaliation by supervisors after making claims of misconduct against the agency. Court records show Loew reached a settlement in a lawsuit she filed against Metro.

“Meet Jennifer Loew, a mother of 3 whose courageous actions helped bring this issue the attention it deserves,” Villanueva wrote on social media, linking to an interview Loew gave with Fox 11 alleging impropriety regarding the nonprofit’s contracts with Metro.

In a statement sheriff investigators presented to the judge when they sought the warrants for last week’s searches, they said that a whistleblower, whose name was redacted, told authorities that the contract was pushed forward by Metro Chief Executive Phillip Washington “in order to remain ‘in good graces’ with” Kuehl.

The statement also details campaign contributions Kuehl received from Giggans and others associated with the nonprofit, alleging that “the donations can be seen as having been given for payment in return for the future awarding of the” hotline contracts.