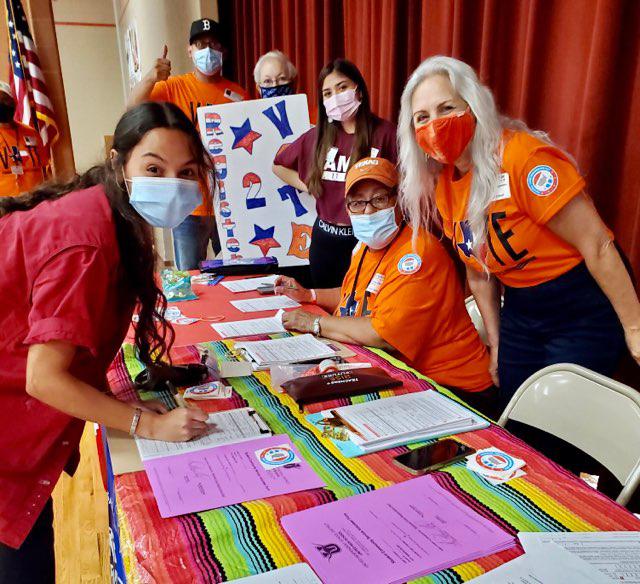 One organization set out on a mission Tuesday to register 2,022 new voters in honor of the upcoming 2022 elections.

The organization “Powered by People” arrived Tuesday at various locations around the city as they announced their plan to not just register people to vote on certain days but rather year-round, so turnout in the city can continue to grow. The events proved to be fruitful as they were able to register many young people who had just become eligible to vote.

It was still unclear if they had reached their goal as of Tuesday evening, but spirits were high following the first day of the push.

“National Voter Registration Day is a nonpartisan civic holiday celebrating our democracy,” said Sylvia Bruni, the Webb County Democratic Party Chair and ambassador of Powered by People. “First observed in 2012, it quickly gained momentum, with nearly 4.5 million new voters registered to vote on that holiday to date. According to the U.S. Census Data for 2020, as many as one in four eligible Americans find themselves unable to vote because they missed a deadline, didn’t update their registrations or were not sure where to register.”

According to Bruni, the main aim of the civic holiday is to make sure everyone who is eligible to vote has the opportunity to do so.

“Our Webb County Powered by People Ambassadors, a non-partisan group of Webb County volunteers, are just as committed to giving all who are eligible to vote access to this precious right to raise our voice,” Bruni said. “Being able to celebrate this important national holiday at United High School was an especially momentous opportunity for all, both the Ambassadors and the UHS students.”

One of the primary goals for targeting the high school and other locations year-round in the city was to help register 2,022 new voters as a reference to the crucial upcoming election year.

“We set that goal because we were looking ahead to a momentous 2022 primary and mid-term election season. (There is a) need to raise the voice of our crucial Webb County,” Bruni said. “Even though Webb County realized the highest voter turnout in decades in 2020 — 50% of the eligible voters coming to the polls — that number still was too low. We can and should do much better, so the time to register voters should be year-round, not a seasonal objective.”

According to Bruni, the voter turnout in Webb County has been around 38% for the past 20 years.

Rafael Benavides, the Spanish press secretary for the Texas Democratic Party and former City of Laredo public information officer, also provided congratulations to the efforts of the Webb County volunteers in getting together to register people to vote.

“We commend the efforts by Powered by People and the volunteers at the Webb County Democratic Party for putting together a successful series of events in anticipation of National Voter Registration Day,” Benavides said. “It is encouraging to see so many new people excited to vote. By registering to vote and casting a ballot, we are taking on an active role in the democratic process and determining for ourselves just how our society is to be governed. By becoming involved, we have the opportunity to increase local funding, protect human rights and increase the quality of life for everyone.”

Bruni said many people who registered Tuesday voiced how they felt great about finally being able to vote and showed their enthusiasm for the upcoming elections. Although students were the main objective of new voters to be reached, Bruni said the organization was able to gather and register many people including some older individuals who have never voted before but now feel the need to register.

“We hear a variety of reactions — from the very proud young 18 year old who has been very immersed in public affairs and is concerned about the state of their country or simply wants to be sure that they are involved, to the older individual who had never been given the opportunity or felt that it wasn’t important and now realizes that, yes, their vote does matter, does count,” Bruni said.

The United High School location was not the only place in which members of Powered by People was registering voters as they also went to the Joe Guerra Public Library from 6-8 p.m. in the evening for another event.

While at the location, organization members also saw as “Willie Vasquez, Your Vote is Your Voice” was aired at the library to help show people who attended or those who were in the library the importance of voting.

More information about these events and others can be found by contacting Bruni at 956-763-3335 or by emailing her at either sylbru@aol.com or sylbru746@gmail.com.

Longtime Brunswick County Commissioner Marty Cooke joins 2022 US Senate race - Port City Daily
The Democrats Are Freaking Out About the 2022 Midterms. Good! - The New Republic
Inside Donald Trump’s $100million war chest that could propel him back into the White House with new...