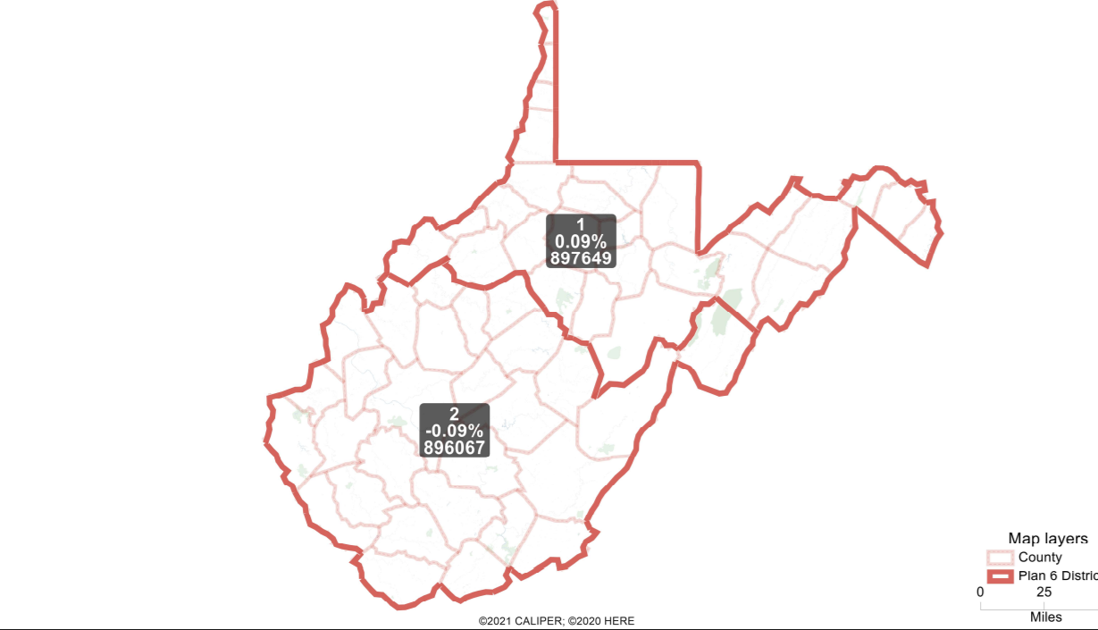 Legislators completed work Thursday on a new West Virginia congressional map, reducing the current three congressional districts to two. However, the special session of the Legislature will continue into at least its fifth day, as the Senate again postponed action on its redistricting map after a controversial new plan surfaced late Wednesday.

The Senate laid over its redistricting plan, Senate Bill 3034, with a new floor amendment pending that drew loud objections from Democrats, who say it will split up 13 counties and 14 cities, putting the pieces into 28 senatorial districts, nullifying the voting power of many municipalities, including Charleston.

“It splits 14 counties and 13 cities. It doesn’t pass the compactness test. It wasn’t considered by the Redistricting Committee,” Senate Minority Leader Stephen Baldwin, D-Greenbrier, said Thursday. “What happened to transparency?”

“Kanawha County may only have a single senator moving forward. Cabell may not have even one senator,” Baldwin said of the proposal.

“That map isn’t meant to keep communities of interest together,” he added. “For example, Fayette and Greenbrier have never been separated in a Senate district in our state’s history.”

“This map will affect our state for at least a decade. It’s imperative that it be done in a constitutional, fair and community-centered way,” Baldwin said.

Senate Republicans and Democrats met separately in closed-door caucuses Thursday afternoon, presumably to discuss the proposed floor amendment. Conversely, the House on Thursday made quick work of congressional redistricting, passing Senate Bill 3033 on an 84-12 vote with no floor debate.

“This bill puts the state in two districts, which are compact and have low drive times,” House Redistricting Chairman Gary Howell, R-Mineral, said in urging passage of the bill.

The Senate on Wednesday cleared the way for final passage of the plan, which divides the state horizontally, into north and south districts, by amending the Senate version of the bill to make the allocation of counties identical to the House plan.

Senate Redistricting Chairman Charles Trump, R-Morgan, said the north-south map is the only way to maintain anything close to compactness in a state with two panhandles.

“Because of its shape, compactness is a challenge with any map,” he said Wednesday.

In theory, the plan would pit Rep. David McKinley, R-W.Va., against Rep. Alex Mooney, R-W.Va., in the 2022 primary, if both seek reelection.