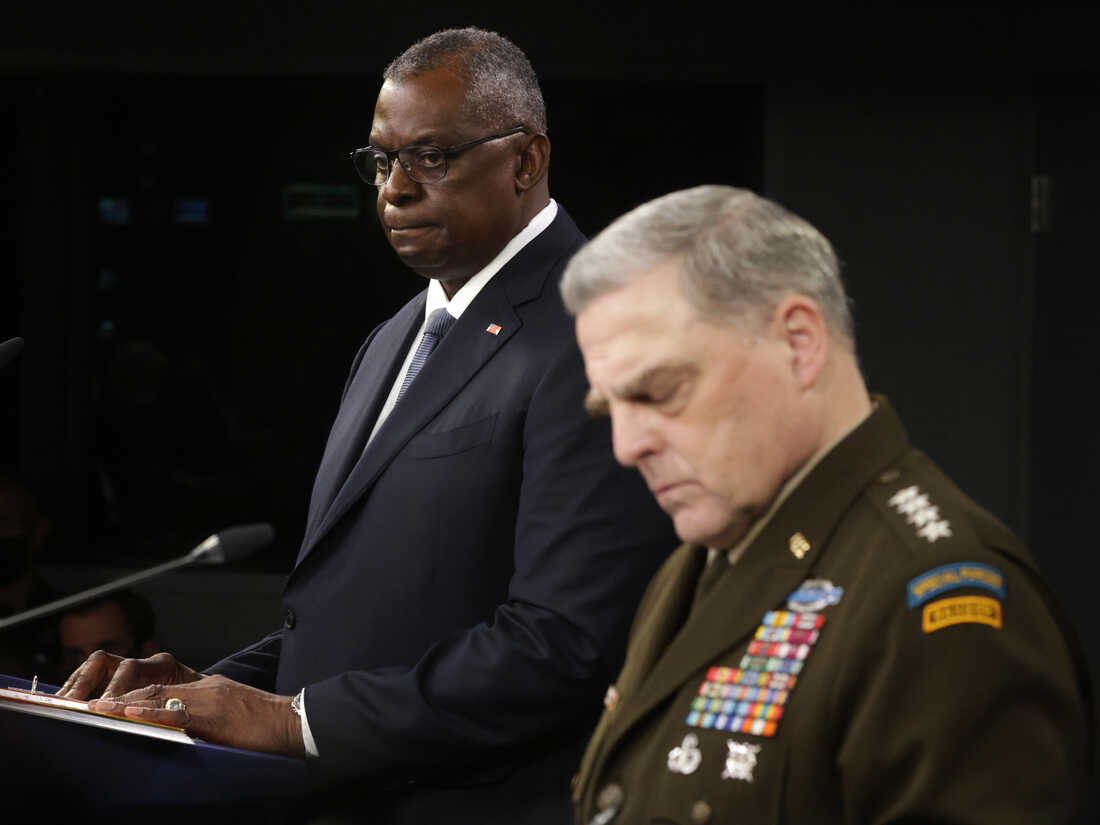 Secretary of Defense Lloyd Austin and Chairman of the Joint Chiefs of Staff Gen. Mark Milley, seen here during a Sept. 1 speech at the Pentagon, will face senators’ questions Tuesday on the U.S. withdrawal from Afghanistan. Alex Wong/Getty Images hide caption Secretary of Defense Lloyd Austin and Chairman of the Joint Chiefs of Staff Gen. Mark Milley, seen here during a Sept. 1 speech at the Pentagon, will face senators’ questions Tuesday on the U.S. withdrawal from Afghanistan.

Top Pentagon officials are testifying Tuesday for the first time since the completion of the U.S. military withdrawal from Afghanistan in what is expected to be a confrontational hearing before the Senate Armed Services Committee.

The hearing is expected to feature rigorous questioning from lawmakers on both sides of the aisle. Democratic and Republican lawmakers alike have criticized the chaotic withdrawal that saw U.S. troops try to coordinate a mammoth evacuation of Americans and Afghan allies as the Taliban quickly gained control of the country. Criticism of the administration’s actions became heightened when 13 U.S. troops were killed in an attack near Kabul airport by the terrorist group ISIS-K.

Ahead of the hearing, Republican Sen. James Inhofe of Oklahoma, who serves as the ranking member on the committee, wrote to Austin to request records and intelligence reports related to the pullout.

Ahead of next week’s Armed Services Committee hearing, I’ve asked @SecDef for the information I believe the committee needs to conduct robust, methodical oversight of the United States withdrawal from Afghanistan. pic.twitter.com/PFlZcj7sKx

In his letter, Inhofe asks for a full accounting of the military equipment that was left behind after the withdrawal, along with data on how many people were evacuated from the country and intelligence on ISIS-K operations. He set Oct. 8 as the deadline.

But Afghanistan is not expected to be the sole focus of Tuesday’s hearing. It’s likely Gen. Milley will be grilled about recent claims in a book by journalists Bob Woodward and Robert Costa alleging that Milley called his counterpart in the Chinese military to ease fears about then-President Donald Trump launching an attack following his defeat in the presidential election.