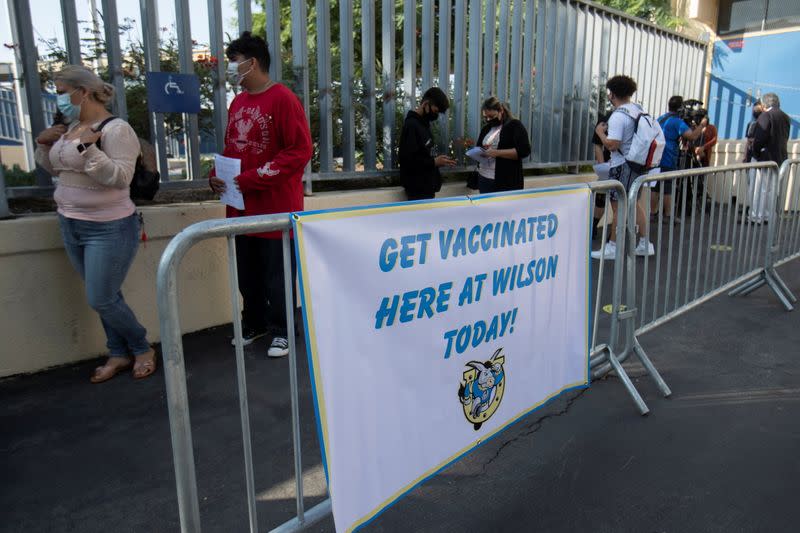 LOS ANGELES (Reuters) – Los Angeles officials on Wednesday signaled they would vote next week to prohibit unvaccinated people from entering most businesses in the United States’ second-largest city, one of the nation’s most severe crackdowns so far of the COVID-19 pandemic.

All but one of the City Council members present on Wednesday said they supported the proposed “emergency” ordinance, which would require proof of vaccination to enter restaurants, bars, shopping centers, gyms and other indoor spaces.

“I am sick and tired of yahoos going into Trader Joe’s (grocery store) refusing to wear a mask,” City Council member Paul Kerkorian said in angry remarks. “I am fed up with people who want to make this into such a politicized issue they have lost all semblance of civility in our society.”

If the proposal is approved next week, as expected, Los Angeles would join San Francisco and New York among major U.S. cities requiring proof of vaccination for indoor businesses. The new rule would take effect in November.

Political leaders across the United States, led by Democratic President Joe Biden, have ratcheted up pressure on the unvaccinated in recent weeks. Laws requiring proof of vaccinations are deeply controversial in the United States, with many Americans criticizing them as unconstitutional and authoritarian.

A majority of the Los Angeles City Council was prepared to vote in favor of the proof-of-vaccine measure on Wednesday. They were frustrated in that effort by council member Joe Buscaino, who, by withholding his vote, stood in the way of a so-called “unanimous consent.”

Buscaino said the vaccine mandate could not be enforced, citing a report by the city’s Department of Building and Safety that it was not equipped to take on such a law enforcement role.

The Los Angeles County Unified School District has issued an order requiring all teachers, staff and students at least 12 years old to be inoculated by Oct. 15 unless they can establish a religious or medical exemption.