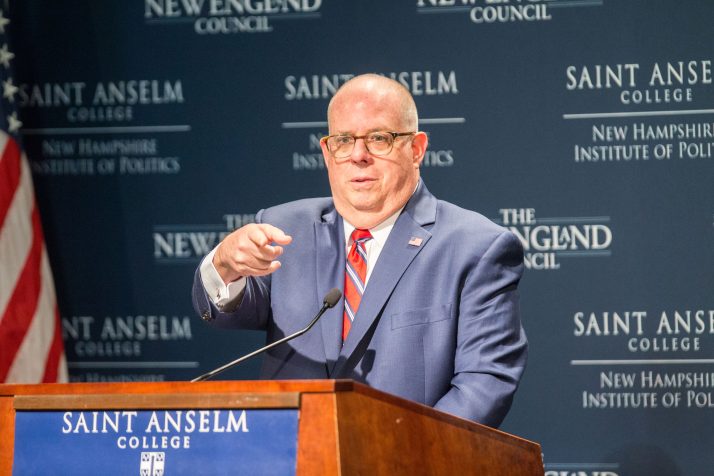 Republican Larry Hogan is finishing his tenure as Maryland’s governor Wednesday with higher favorability among Democrats than his own party’s voters.

Eighty-one percent of Maryland Democrats approve of the departing governor, compared with just 68 percent of Republicans, according to recent polling from Gonzales Research. Hogan was elected twice in the deep blue state and gained popularity for his ability to work across the aisle with the legislature. His overall approval rating in Maryland is 77 percent, 10 points higher than when the poll first tracked his favorability rating in January 2016.

Hogan will give up the governor’s mansion to Democrat Wes Moore on Wednesday. Moore trounced Republican Dan Cox, who was far more partisan than Hogan, by more than 30 percentage points last November. Cox would frequently attack Hogan on the campaign trail for working with Democrats, and Hogan did not back his campaign.

Hogan is widely believed to be considering a presidential run in 2024. His standing in the polls highlights both the strengths and weaknesses of a presidential run by Hogan—his supporters could point to the results as evidence of the governor’s unique popularity and ability to win two consecutive terms in a state where Republicans don’t compete. His popularity with Democrats, however, will not help him emerge from a Republican primary. Hogan is a regular critic of former president Donald Trump, whose policies remain popular with Republican primary voters.

“I think President Trump is at a low point in his career,” Hogan said in December. “I mean, I think he peaked in November of 2020, and, you know, it was slow to erode some of the base, but now I think he’s at his lowest point ever.”

Hogan’s Democratic favorability rating of 81 percent is identical to Biden’s, according to the poll. African Americans also approve of Hogan in large numbers, with 81 percent saying they approve of the governor’s performance. Hogan’s efforts to “re-fund the police,” particularly in majority-black Baltimore, enjoyed 88 percent support from black Maryland voters, the Washington Free Beacon reported—even as Democrats criticized the effort as “divisive” and “misguided.”

Hogan’s widespread popularity has landed the governor’s name in conversations about the 2024 race. Hogan hinted at a presidential bid when asked in November.

“I’ve been saying since 2020 that we have to get back to a party that appeals to more people that can win in tough places like I’ve done in Maryland,” Hogan told CNN just after the midterm elections. “And I think that lane is much wider now than it was a week ago.”

While Hogan advertises himself as a moderate consensus-builder, recent polling shows a third of Republicans want Trump as the nominee and two-thirds want his policies but a different candidate.