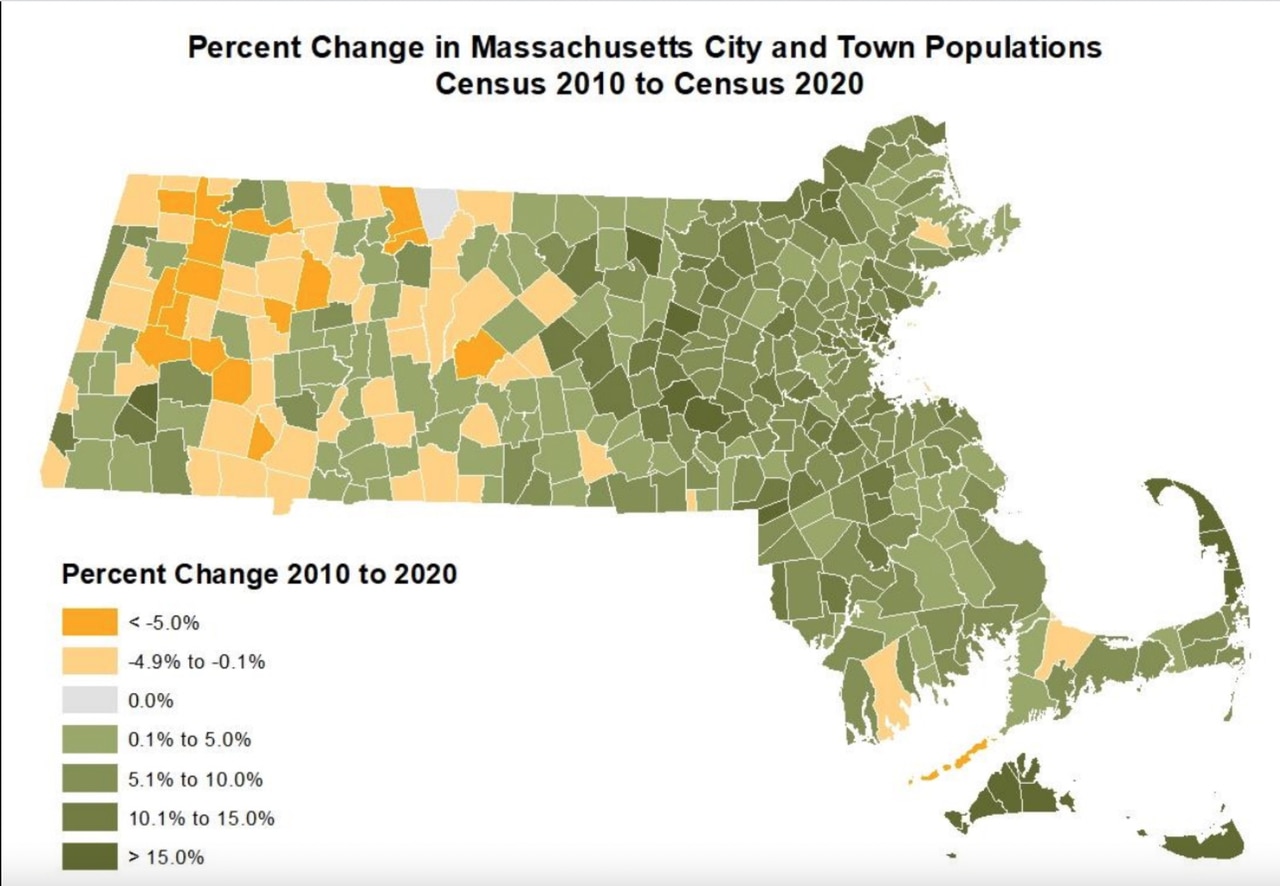 After months of pandemic-induced delays, the U.S. Census Bureau on Thursday released the local-level population and demographic data from the 2020 count of the nation’s population, triggering a sprint to redraw the boundaries of the state’s legislative and Congressional districts over the coming months.

The 2020 Census counted 7,029,917 people living in Massachusetts, a 482,288-person or 7.4 percent increase over the last decade that outpaced the 4.1 percent average in the Northeast and equaled the growth rate of the country as a whole. The state’s growth has been uneven, likely requiring the western Massachusetts districts represented by U.S. Rep Richard Neal and U.S. Rep. Jim McGovern’s western/central district to be expanded in size to meet the 781,497-constituent target set by Census officials, while the footprint of eastern districts close to Boston may need to shrink or shift west.

“We’ve had significant changes within our state. We’ve seen cities grow dramatically … Many of the suburban communities grow as well,” Galvin, the state’s liaison to the Census, said. He added, “Particularly gratifying was seeing some of the communities that we were most concerned about, where we knew there were significant populations of non-native born persons, being fully counted. So, for instance, the city of Lawrence is now at 89,000, a dramatic gain. The city of Revere had the greatest percentage gain. The city of Chelsea, one of the concerns we constantly expressed, is now at 40,000 people. The city of New Bedford is at 102,000 people. These are all communities that, even to the last days of the Census, we were constantly struggling to make sure people were counted in those communities.”

The only two counties in Massachusetts to shed residents over the last decade were Berkshire (-2,193) and Franklin (-343). Every other county saw population growth, led by the gains of 128,917 people in Middlesex County, 75,913 people in Suffolk County and 66,670 people in Essex County. By growth percentage, Nantucket County led the way with a 40.1 percent gain (an increase of 4,083 people).

That’s at odds with the national trend, the U.S. Census Bureau said Thursday. Across the country, less than half (47 percent) of the nation’s 3,143 counties gained population over the last decade.

“So all of these districts are going to have to change. And there’s going to have to be some significant adjustment made,” Galvin said. “Just to take Boston because it’s the largest city as an example, Boston appears to have gained — did gain — 58,000 people. That means it probably would gain an additional, potentially an additional, seat in the House of Representatives.”

The Special Joint Committee on Redistricting, led by Assistant House Majority Michael Moran and Senate President Pro Tempore William Brownsberger, has already held more than 18 hearings on the redistricting process and is expected to hold more public hearings once its proposed district maps are available.

Moran told the News Service on Thursday that the committee’s third-party vendor is working now to put the latest Census data into a format that meets the committee’s parameters. Once it is, lawmakers will begin diving into the numbers and digesting it with the testimony from redistricting hearings.

But he is also mindful of the Census Bureau’s plan for another data release — the Census says it will be the same data but presented in different formats — by Sept. 30. Moran said the committee has to use official Census data and “given the Census’ credibility in the last year and a half,” he is not considering the data released Thursday to be the official numbers.

“My job isn’t to be first on this stuff, my job is to be correct,” Moran, who led the last round of redistricting for the House, said. He added, “As far as I’m concerned and the House is concerned — and I think you’ll see Senator Brownsberger is in a similar position — our job is to get it right. And we’re going to look at these numbers when they’re in a safe space for us to look at them.”

There could be other proposed maps in the mix as well. Senate Minority Leader Bruce Tarr and Republican Sen. Ryan Fattman plan to oversee the redistricting process for the Senate minority caucus and are leaving their options open as they scrutinize the fresh data, a Tarr spokesman said. For the House Republicans, Rep. Paul Frost will serve as the redistricting point person.

“Whether the caucus produces its own proposal will be dictated in large part by what the preliminary maps look like, but we certainly plan to offer our input throughout this important undertaking and will be working to ensure that the entire process remains open and transparent,” House Minority Leader Brad Jones said.

Shortly after the data was made available, advocates with the Drawing Democracy Coalition said they plan to use it to produce the organization’s own “unity map” that would keep communities together and ensure equitable representation for Black, Indigenous, Latinx, and Asian-American communities, people of color, immigrants, and low-income communities. The group said it plans to eventually submit its map to the Special Joint Committee on Redistricting.

“Redistricting is a once-in-a-decade opportunity to better ensure authentic representation and open new opportunities for building power for BIPOC, immigrant and low-income communities,” the coalition said in a statement. “Especially as efforts are underway across the country to restrict access to voting, it is more important than ever to ensure that voters can elect representatives of their choice. While today’s release of the redistricting data is several months delayed, the Drawing Democracy Coalition is confident that, along with the Special Joint Committee on Redistricting, we have a strong plan in place to ensure that the process remains fair and transparent and that the new district maps are approved by the November 8, 2021 deadline.”

State representatives planning to seek reelection in 2022 must reside within their district boundaries for at least one year ahead of time, making Nov. 8, 2021 a soft deadline for the new maps that would give candidates a chance to ensure they can be eligible for next year’s election.

Drawing Democracy said it has already received and shared with the Special Redistricting Committee 99 “community of interest” map submissions “providing valuable insight from local residents into what areas of their communities are most important to keep together.”

Once the group’s unity map is drafted, it will go through “extensive legal review” to make sure that it is in compliance with the Voting Rights Act, the Equal Protection Clause of the 14th Amendment, the Massachusetts Constitution and state laws. Drawing Democracy plans to solicit input from its coalition members at five virtual listening sessions, make any necessary tweaks and then present it to the legislative committee for consideration.

“During redistricting in 2011, the final maps approved by the legislature closely resembled the unity map presented by Drawing Democracy,” the group pointed out Thursday in its announcement.

Thursday’s data release from the U.S. Census Bureau follows its April release of congressional apportionment data, which provided total state headcounts to be used to determine each state’s number of U.S. House of Representatives seats and in funding formulas. Massachusetts added 482,288 people since the last Census in 2010, ensuring that its delegation to the U.S. House will remain the same size rather than shrinking by one as happened after the 2010 count.

But that April data was not enough to draw maps of voting districts within states because it did not get into the granular details like where in a state people live, or their age, race and ethnicity.

The redistricting data released Thursday gets down to the individual Census block, counts only residents (the apportionment data also includes “federally-affiliated” people living overseas), and includes race, ethnicity and some housing information. It became available Thursday in what the Census called a “legacy format” that states, redistricting software vendors and groups like the National Conference of State Legislatures are familiar with.

The Census plans to release the same data in manners more accessible to the public by the end of September, including through the data.census.gov platform. Governors, state legislative leaders and any redistricting commissions around the country will get DVDs and flash drives with an integrated data browsing software by the end of next month.

But by then, the Brennan Center for Justice at NYU School of Law said, “many states are expected to start and potentially even complete their map-drawing processes.”