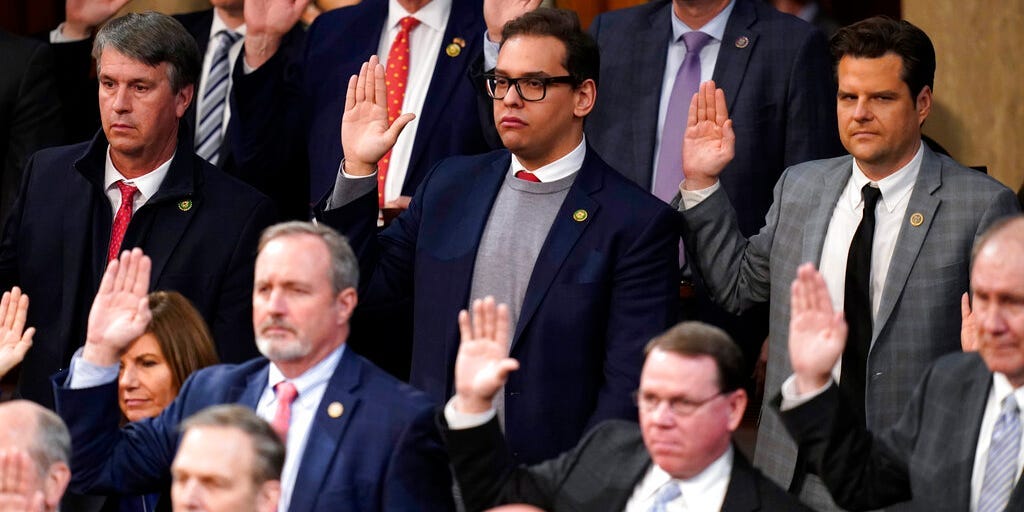 Rep. Matt Gaetz on Saturday said embattled GOP Rep. George Santos will have to go through an ethics process but shouldn’t “be subject to shunning” beforehand as he needs to represent his constituents.

Santos has faced calls to resign for allegedly lying about multiple aspects of his background and several ethics complaints filed regarding his campaign finance violations, but Gaetz told CNN’s Michael Smerconish during a Sunday interview that the New York Republican should be afforded the opportunity to present his side of the matter.

“George Santos will have to go through the congressional ethics process. I don’t want to prejudge that process, but I think he deserves the chance to at least make his case,” said Gaetz, who has faced similar calls to step down amid a House ethics probe involving sexual misconduct. “There are requirements members of Congress have to meet when it comes to the money that they donate to their own campaigns.”

“But until then, I don’t think that George Santos should be subject to shunning because the Americans he serves deserve representation, and they have real challenges, and we ought to work together to solve their challenges and meet their needs,” he added.

On Thursday, Gaetz himself interviewed Santos while filling in for former Trump White House chief strategist Steve Bannon on the “War Room” podcast.

While speaking to Gaetz, Santos did not reveal the source of the money that used to give to his successful House campaign.

Last week, Santos was hit with three ethics complaints from End Citizens United, the advocacy group that filed complaints with the Federal Election Commission, the Department of Justice, and the Office of Congressional Ethics.

And top Republicans in Nassau County — the suburban New York jurisdiction that anchors Santos’ congressional district — have called on him to resign from Congress. But even after the collapse in his support from members of his own party on Long Island, Santos has rebuffed the calls for his ouster.

And House Speaker Kevin McCarthy of California, who needs Santos’ vote with such a narrow GOP majority, wouldn’t call on the congressman to step down — while also stating that the freshman had “a long way to go to earn trust.”

“The voters of his district have elected him,” McCarthy said last Thursday during a Capitol Hill news conference. “He is seated. He is part of the Republican conference.”

However, now-President Joe Biden handily won Santos’ district in the 2020 election, and the race could go either way in an open-seat contest.