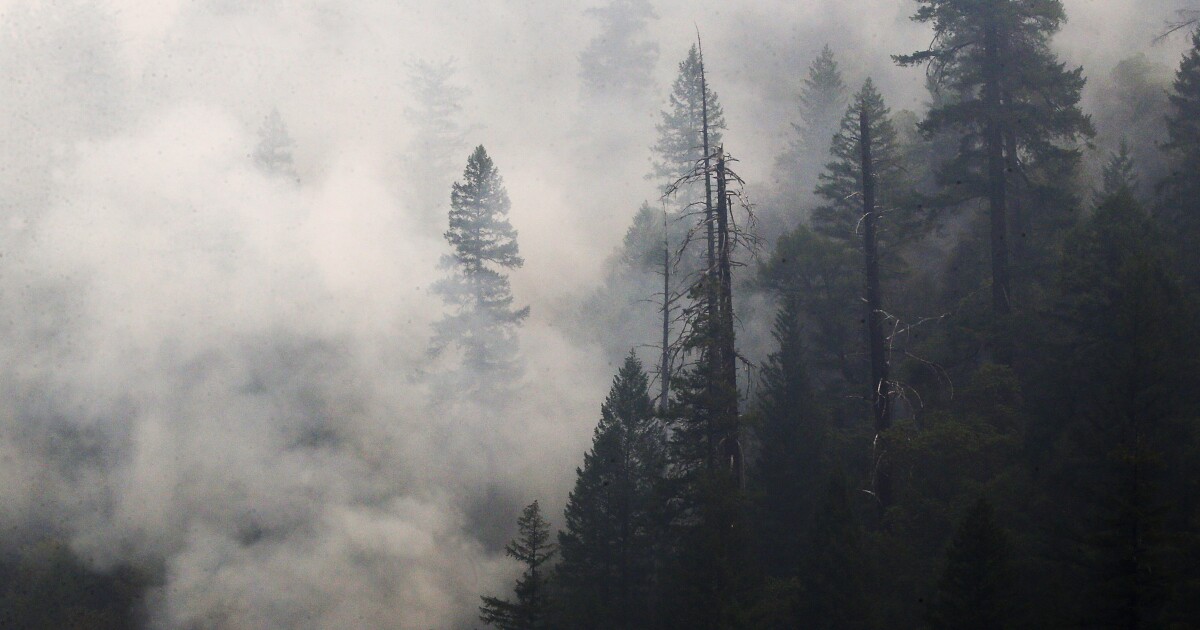 A fire big enough to make its own lightning used to be as rare as it sounds.

But the McKinney fire, which erupted Friday, generated four separate thunder and lightning storms within its first 24 hours alone. A deadly combination of intense heat, parched vegetation and dry conditions has turned the 55,000-acre blaze in the Klamath National Forest into its own force of nature.

Four separate times, columns of smoke rose from the flames beyond the altitude at which a typical jet flies, penetrating the stratosphere and injecting a plume of soot and ash miles above the Earth’s surface. It’s a phenomenon known as a pyrocumulonimbus cloud, a byproduct of fire that NASA once memorably described as “the fire-breathing dragon of clouds.”

In Siskiyou County, the water in these clouds returned to Earth as rain, accompanied by thunder, wind and lightning, in “a classic example of a wildfire producing its own weather,” said David Peterson, a meteorologist at the U.S. Naval Research Laboratory, which has developed an algorithm to distinguish fire-induced thunderstorms from traditional ones.

Investigators have yet to determine the cause of the McKinney fire, which grew rapidly in hilly, challenging terrain and was uncontained as of Tuesday.

Mike Flannigan, a fire scientist at Thompson Rivers University in western Canada, said he isn’t shocked to see fires this powerful. The data have been pointing in this direction for years. He just didn’t think they’d be happening this soon.

“What we’re seeing in the western United States and in British Columbia in the last few years, I would not have expected to see until 2040,” Flannigan said. “The signal is clear: this is due to human-caused climate change. It can’t be any clearer than that. It’s happening more rapidly than I would have expected. This is my field, and this is surprising how rapidly things are changing.”

It isn’t just that wildfires are more powerful, more frequent and burning more acreage each year than ever before, he said. The energy generated by these conflagrations is also creating columns of smoke so big that they leave the troposphere, the bottom layer of the atmosphere that wraps the Earth “like an apple skin,” as Flannigan put it.

The troposphere is where weather happens, and where eye-searing clouds of smoke and soot circulate even from moderately sized fires. But when a smoke column such as those emanating from the McKinney fire shoots through that layer and enters the stratosphere — the higher, more stable layer above — it creates havoc with local weather and seeds the Earth’s atmosphere with aerosol pollutants whose consequence science is still sorting out.

Days before the McKinney fire broke out, researchers from the University of Utah published a new study in the journal Scientific Reports documenting the growth of smoke plumes in wildfires over most of the last two decades.

The team looked at 4.6 million readings of smoke plumes recorded in the western U.S. and Canada between 2003 and 2020. The data were taken every hour from fires burning in August and September in each of those 18 years.

“If we have climate trends that are encouraging faster fire spread, more intense wildfire activity, greater heat flux off of these fires, we can expect a higher plume top height,” said Kai Wilmot, a University of Utah postdoctoral researcher in atmospheric sciences and a co-author of the study.

These smoke columns are not only taller, Wilmot and his colleagues noted, but with each passing year, they also grew more densely packed with microscopic bits of soot and ash. This fine particulate pollution, known as PM2.5, is linked to asthma, cardiovascular problems and premature death.

And some of the nation’s most intense growth in smoke emissions is coming from the Klamath region. The dataare unclear on how much the height of Klamath smoke is increasing, Wilmot said, but the concentration of harmful particulate pollution coming out of its clouds most definitely is climbing.

A paper that the team published last year looking at fire data from 2000 to 2018 highlighted the Klamath region as a hotspot of emissions, particularly in the month of August.

“It just felt like the McKinney fire was like clockwork,” Wilmot said. “We’re right on the cusp of August. It’s hot and dry. It’s right in the Klamath. And then overnight, boom.”

Plume height is a function of both atmospheric conditions, such as higher temperatures and decreased humidity, as well as fire size, which is largely determined by the amount of dry vegetation available to burn. The Klamath area has all those qualities in abundance.

California is in the middle of the worst drought since records began. Average summer temperatures in California are 3 degrees higher now than they were at the end of the 19th century.

The days before the fire were a sweaty mess of triple-digit temperatures and low humidity, which further dried plants already parched from a dry winter. The fire started in an overgrown area previously used for logging, which meant fewer fire-resistant old trees and a lot more smaller and easily flammable younger ones.

When plants burn, the carbon stored in their leaves is released into the atmosphere, adding to the concentration of greenhouse gases. But as the Utah team noted, fires spew tons of fine particulate pollution as well.

Measuring less than 2.5 microns across, these tiny particles of pollution can be inhaled deep into the lungs when breathed down here on the ground. In the stratosphere, they wreak a different kind of havoc that scientists don’t yet fully understand.

Before massive, climate-change induced wildfires, volcanos were the primary vehicle that sent soot blasting into the stratosphere.

Scientists studying the aftermath of the massive 2019 and 2020 wildfires in Australia calculated that their emissions were on par with that of a mid-size volcanic eruption.

The Earth’s geologic record shows that over time, these particles can act as a cooling system, deflecting the sun’s radiation before it can enter the atmosphere. But it’s a complicated dance. Separate research from MIT on the Australian fires found that their smoke plumes depleted the ozone layer, which protects the Earth from ultraviolet radiation.

The long-term consequences aren’t clear. We simply don’t have millennia worth of data on the planetary effects of human-aggravated mega-fires, the way we do with volcanoes.

Social media is full of video clips of volcanic-like clouds roiling skyward from the Klamath National Forest. They’re going to become more common, as are fires powerful enough to generate their own lightning.

“The trend is to see more and more of these suckers,” Flannigan said. “It’s horrible, but we have to learn to live with it.”