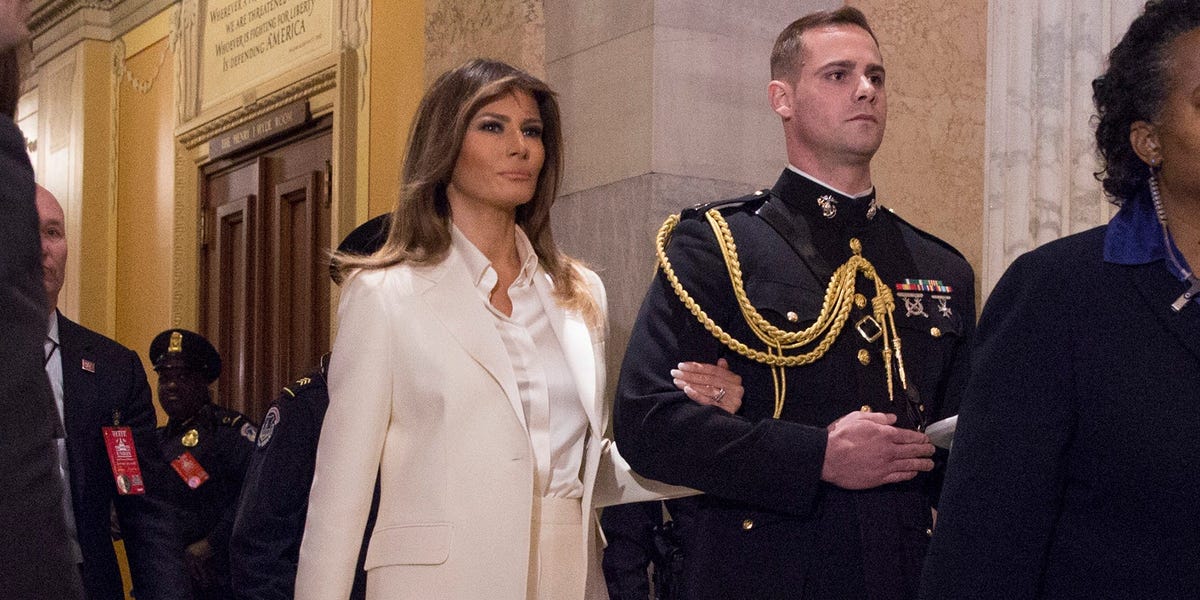 Former First Lady Melania Trump deliberately appeared arm-in-arm with a handsome military man as her escort to the 2018 State of the Union as a dig at her husband after the Stormy Daniels allegations broke, her former top aide writes in an upcoming book.

Stephanie Grisham, who served as Melania’s chief of staff and communications director, sheds more light on Trump and Melania’s marriage in her forthcoming memoir “I’ll Take Your Questions Now: What I Saw in The Trump White House,” which is set to be released on October 5. The book was obtained by The New York Times and Washington Post ahead of publication.

Grisham writes that Daniels’ allegations and other women coming forward “basically unleashed” Melania to take subtle digs at her husband, former President Donald Trump, in public, like excluding him from photographs and social media posts and trying to get under his skin by appearing with an attractive military escort.

While it’s routine for first ladies to have military escorts to big events, Grisham writes the Melania had hand-picked an especially handsome military aide to make Trump jealous.

The former first lady, Grisham writes, paired a cream-colored pantsuit with nude high heels to the event and claimed she needed to hold the military aide’s arm to keep steady due to the slippery floors of the Capitol.

“I laughed to myself because I’d seen the woman navigate dirt roads in her heels,” Grisham writes in the book, according to the Post.

Melania, Grisham writes, never lashed out or blew up at her husband. While she didn’t buy his denials, Grisham paraphrased her as saying: “This is Donald’s problem. He got himself into this mess. He can fix it by himself,” per the Post.

The Wall Street Journal first reported in January 2018 that Trump had orchestrated a $130,000 hush money payment to prevent Daniels, an adult film actress whose legal name is Stephanie Clifford, from coming forward publicly with her claims of an affair with Trump prior to the 2016 election.

Clifford said she and Trump had sex in 2006, the year after Trump and Melania got married and shortly after the birth of their son Barron.

Trump’s former personal lawyer and fixer Michael Cohen eventually pleaded guilty to making an illegal campaign contribution in connection with the payment in federal court in August of 2018, in addition to tax and bank fraud charges.

Trump was referred to multiple times in federal prosecutors’ indictment against Cohen as “Individual-1” but was not charged with any crime.

Both Trump and Melania have released strongly-worded public statements denouncing Grisham, who resigned after the January 6 insurrection, as a vengeful former employee seeking a payday, seeking to discredit the claims in her book.

Trump’s spokeswoman Liz Harrington said the book “is another pitiful attempt to cash in on the President’s strength and sell lies about the Trump family,” and Melania’s office previously called it “an attempt to redeem herself after a poor performance as press secretary, failed personal relationships, and unprofessional behavior in the White House” based on “mistruth” and “betrayal.”