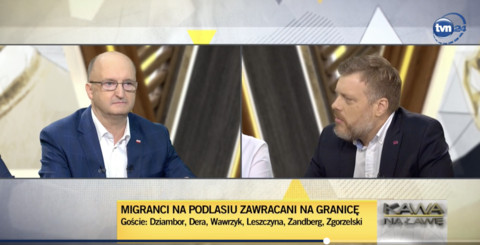 A senior Polish government official has conceded that migrant children, including infants, were among those authorities had driven back to the Belarusian border.

Poland’s deputy foreign minister Piotr Wawrzyk said on Sunday (3 October) the kids were “not driven off into the forest, but to the border zone”.

The border zone is a forested area where migrants have been stuck between Belarus and Polish border guards, some for more than three weeks.

Polish state emergency measures, extended for another 60 days, mean NGOs and journalists have been denied access to the 3km-deep strip.

At least six people have so far died, mostly due to exposure, as temperatures continue to plummet.

Wawrzyk’s comments were made during the TVN24 broadcaster’s talk-show ‘Kawa na ławę’ on Sunday evening.

“We’re talking about driving children off into dark forests in freezing weather,” said Adrian Zandberg, an MP from the left-wing Left Together party, also on the show.

Zandberg noted some of those children were only two and three years of age, at which point Wawrzyk interceded and said: “Not driven off into the forest, but to the border zone”.

Wawrzyk is a member of Poland’s ruling, right-wing Law and Justice party (PiS), which has justified its hard line against migrants by talk of Belarus and Russia’s “hybrid war” against EU borders.

People who wish to claim asylum cannot be pushed back over a border, under EU and international law.

But Andrzej Dera, another PiS talking head on the TVN24 show, claimed migrant families, including with infants, had wanted to be taken back from Polish camps to the border zone in order to seek asylum in Germany instead of Poland.

“They wanted to return to the border. They said: ‘We want to go back’,” he said.

“You’re [Dera] trying to tell us that parents with small children asked to be taken in the middle of the night to a cold forest and swamps? Congratulations if anyone believes you!”, Izabela Leszczyna, an MP from the main centre-right Civic Platform opposition party, who was also on the TVN24 panel, retorted.

A Polish ministerial decree said in September those intercepted in the border area must leave Poland and be “returned to the state border line”.

It then proposed amendments that would allow the removal of people even after they claimed for international protection.

NGOs and human-rights defenders say such measures are a clear violation of EU asylum law, its treaties, and the charter of fundamental rights, as well as international law.

“I raised the importance of the Polish authorities ensuring in a transparent way that any legislation, policy or practice at Polish Belarus border is fully in line with EU acquis [body of law],” she said in a tweet following the meeting.

She took Poland’s side in laying the blame on Belarus, which has been shuttling people to the border in response to EU sanctions over its anti-democratic crackdown.

And those views were echoed by the commission vice-president in charge of ‘Promoting the European Way of Life’, Margaritis Schinas, who, last week, declined to offer a direct response to questions if Poland’s moves were in line with EU law.

Poland has since announced plans to further secure its border with motion sensors and cameras, modelled after similar efforts by Greece with Turkey.

“We are building a perimeter – a system of motion sensors with thermal cameras – that immediately and precisely show where people are gathering,” said Kamiński, in an interview with Polish right-wing magazine Sieci.