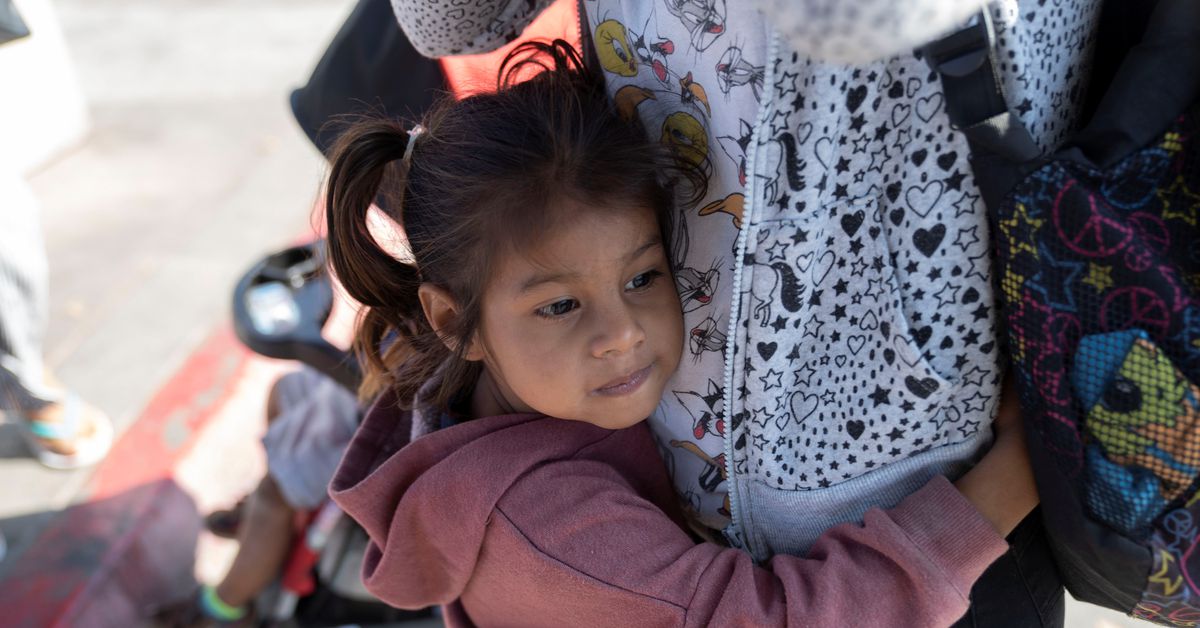 TIJUANA, Mexico, Nov 11 (Reuters) – In a makeshift camp holding hundreds of migrants near a Mexican border crossing to the United States, children sleep on the floor inside tents, with no protection from heat or cold. They do not attend school. Some were born in the United States.

Mexican authorities have warned of the dangerous conditions faced by children who are often taken by parents or relatives on the perilous journey across Mexico because people smugglers tell them having a minor makes it easier to enter the United States.

A recent census by the local government in the border city of Tijuana found that 40% of the 769 people staying at the camp at El Chaparral, a crossing which remains closed even after the border reopened to non-essential travel, were minors.

Inside the camp, which is fenced in and controlled by police, Reuters spoke to over 20 migrant children, four of whom had documents showing they were born in the United States.

All the U.S.-born youngsters said they had left when their undocumented parents were deported – and traveled back through Mexico as the adults tried to return to the United Sates.

One of them, a girl called Evelyn, whose Mexican mother showed a birth certificate stating she was born in Los Angeles, said: “I just want everything to be okay, for my mom to have a home. I want to go to the United States, but with my mom.”

“My sister and I have (U.S.) papers but when my dad had to come here, my mom brought all of us,” said Evelyn, 10. “She cries a lot because they don’t have money to feed us.”

The U.S.-born children do not necessarily have to suffer the hardships of migrant life to try to enter the United States.

They automatically acquire citizenship at birth but all of the U.S.-born children or their parents in the camp that Reuters spoke to said they did not want to be separated from their families, and so they left the United States together and aim to return together.

As illegal immigration leapt in 2021, more than 39,000 undocumented foreign children had been registered by Mexico’s Unit for Migration Policy, Registry and Identity of Persons through September, an increase of 377% from 2020.

Sitting on asphalt near the camp, Josue, a recently arrived 7-year-old Honduran boy, said his dream was to become a doctor in the United States because he did not like to see people die.

Recalling the hunger, cold and exhaustion he faced on the trek with his father, Josue recounted survival skills he had acquired en route, such as riding a Mexican freight train known as “The Beast”, which migrants often jump on to travel north.

He also learned how to yell at police trying to detain him, and to be strong and not cry when he missed his mother.

“(In Honduras), they pointed a gun at my dad, they wanted to kill him, that’s why we came,” he said.

Under pressure from the United States to stem migration, Mexico has urged people not to attempt the journey, but recently announced humanitarian visas for children and pregnant women traveling from southern Mexico in a migrant caravan.

Full of families with young children, according to Reuters witnesses, the caravan halted at one point because dozens of women and children were too worn out to walk.

Pedro a 15-year-old migrant, also had a birth certificate showing he was born in Los Angeles, and said his four brothers were too. His mother brought them back to her native Mexico three months ago when his father was deported.

He now cleans cars in Tijuana using a small rag, earning whatever people are willing to give. “I’ve never worked before, but I’m doing it to help my mom,” he said.

Some small children seemed unaware of the hardship of the camp, running around laughing in donated superhero costumes.

“I’m Superman!” yelled a young boy with a heat rash breaking out across his sun-scorched face.