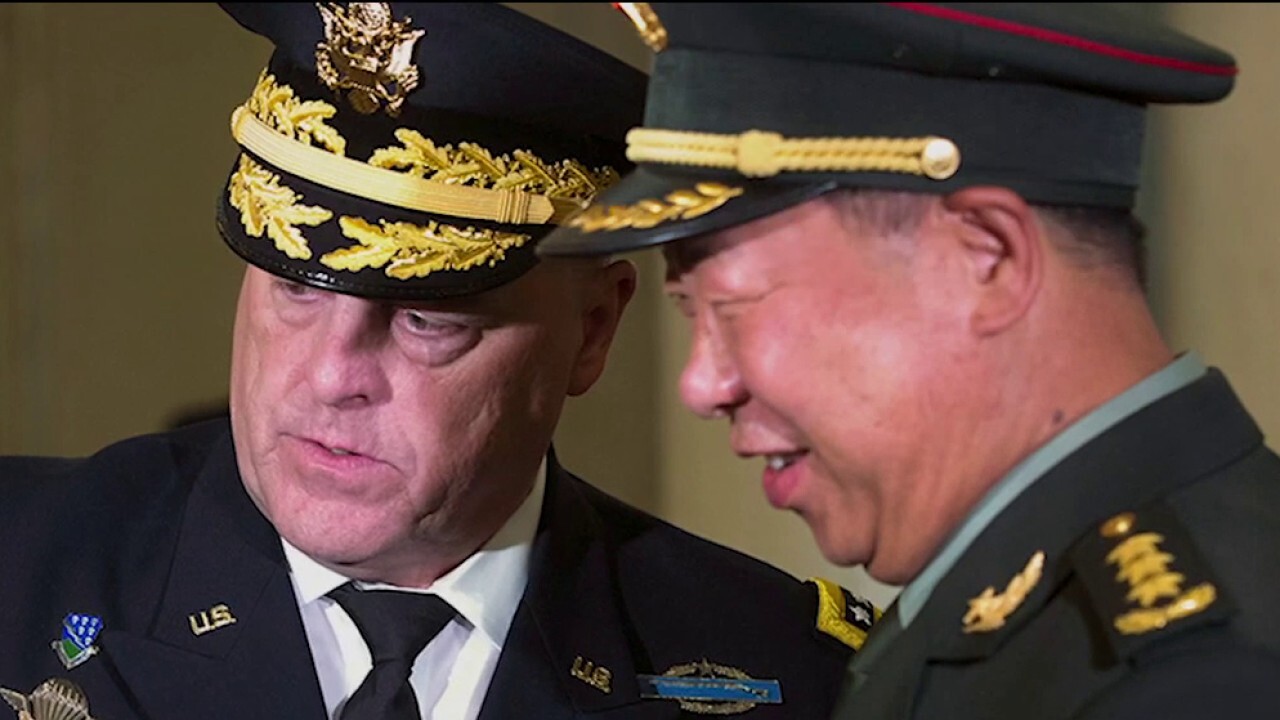 The calls that Chairman of the Joint Chiefs of Staff Gen. Mark Milley had with his Chinese counterpart “were not secret,” U.S. officials told Fox News, maintaining that they were coordinated with multiple high level officials within the Pentagon.

The book claims Milley contacted Li after he had reviewed intelligence that suggested Chinese officials believed the United States was planning an attack on China amid military exercises in the South China Sea.

The authors of the book also claim Milley contacted Li a second time to reassure him that the U.S. would not make any type of advances or attack China in any form, as Milley promised, “We are 100% steady. Everything’s fine. But democracy can be sloppy sometimes.”

But Fox News spoke with multiple individuals who were in the room during the two calls, which took place over video teleconference, not the phone. Officials said the calls were coordinated with the Defense secretary’s office.

“They were not secret,” a U.S. official told Fox News.

Spokesman for Milley, Col. Dave Butler, said in a statement Wednesday that “the Chairman of the Joint Chiefs regularly communicates with Chiefs of Defense across the world, including with China and Russia.”

“These conversations remain vital to improving mutual understanding of U.S. national security interests, reducing tensions, providing clarity and avoiding unintended consequences or conflict,” Butler said. “His calls with the Chinese and others in October and January were in keeping with these duties and responsibilities conveying reassurance in order to maintain strategic stability.”

Butler added: “All calls from the Chairman to his counterparts, including those reported, are staffed, coordinated and communicated with the Department of Defense and the interagency.”

Milley, in keeping with his responsibilities as senior military advisor to the President and Secretary of Defense, “frequently conducts meetings with uniformed leaders across the Services to ensure all leaders are aware of current issues,” Butler said.

“The meeting regarding nuclear weapons protocols was to remind uniformed leaders in the Pentagon of the long-established and robust procedures in light of media reporting on the subject,” Butler continued.

He added: “General Milley continues to act and advise within his authority in the lawful tradition of civilian control of the military and his oath to the Constitution.”

Fox News has learned there were about 15 people present for the phone calls, which were video teleconference calls. Sources familiar told Fox News that there were multiple notetaker present, and said the calls were both conducted with full knowledge of then-Defense Secretary Mark Esper and then-Acting Defense Secretary Chris Miller.

According to the official, there was full civilian oversight of the phone calls, including a representative of the State Department, and Milley’s political adviser. Notes of the calls were taken and a summary note was sent to the Defense secretary and the intelligence community, the official said.

“This was not done like some sort of conspiratorial thing,” another participant who overheard the conversation told Fox News.

According to those familiar, the October phone call had several topics, one of which focused on the election. The Chinese, according to the sources, were concerned about, what they saw as, instability in the U.S. system. Milley, according to a source, reassured his counterpart that the U.S. is a stable democracy.

U.S. officials told Fox News that in October 2020, there was a spike in intelligence suggesting that the Chinese were increasingly concerned that the U.S. would carry out a military strike in the weeks before, or after, the election. There was concern at the Pentagon that the Chinese could misread all of the “noise coming out of Washington” from senior leaders and “stumble into a conflict.”

“Nobody wanted ships bumping into each other in the Pacific,” an official said.

Another source said the call was in the context of assuring adversaries that the United States were not planning any military action.

Another source said, at the time, Defense Secretary Mark Esper asked his policy staff, consisting of all civilians, to place calls to the Chinese to reassure them. Milley was asked to follow up with his Chinese counterpart and was asked to reinforce Esper’s message that there were no military plans afoot.

Pentagon leaders routinely speak to their Chinese and Russian counterparts to lower the possibility of misunderstandings that can lead to inadvertent wars.

According to sources at U.S. Pacific Command, Esper asked then-Admiral Davidson to postpone sending warships and warplanes to the Pacific for a December exercise because it could be misconstrued as a military build up – they were going to have to get there 2 weeks early for a COVID quarantine and the Pentagon was worried the Chinese would misconstrue this movement.

Those at the Pentagon at the time were trying to present a posture of stability – no sudden movements.

Meanwhile, Fox News has learned that Milley had up to 20 phone calls with Li and NATO allies in the period between the election and the Jan. 6 riot in an effort to reassure them that the U.S. government was stable, and to reassure China that the U.S. did not plan a surprise attack. Officials said this was all in an effort to lower tensions with China during the interim period between the election and inauguration, and to project stability so that adversaries of the U.S. did not take advantage of the domestic turmoil during that period.

“It was a stability, confidence building measure, not subversive,” another official present for the call said, adding that reporting about Milley’s attempt to insert himself into nuclear chain of command as “even more ridiculous.”

TOM COTTON: GEN. MILLEY NEEDS TO TESTIFY TO CONGRESS ON REPORT OF SECRET CALL TO CHINA

Meanwhile, the Woodward-Costa book also addresses a phone call between Milley and House Speaker Nancy Pelosi, who discussed her concerns that Trump was “crazy” following the Capitol riot, and implored Milley to take the nuclear football.

According to sources, Milley reassured Pelosi that “the nuclear weapons are fine,” and told the speaker that “we have procedures, checks and balances.”

Sources told Fox News that Milley then reached out to Vice Chairman of the Joint Chiefs of Staff Gen. Hyten, and a number of other officials to review and understand the procedures.

The review lasted approximately 10 minutes, and was intended to remind that there would be a conference call should the president—any president—decide to launch a nuclear weapon.

“That is standard operating procedure,” an official said.

The Chairman of the Joint Chiefs is not in the chain of command for authorizing use of force or a nuclear launch, but rather is the top military advisor to the president. The launch of a nuclear weapons requires layers of verification through the Pentagon and U.S. Strategic Command in Nebraska. which oversees all nuclear forces. At no point did Milley insert himself into that chain of command, according to those familiar with the conversations including members of the Joint Chiefs.