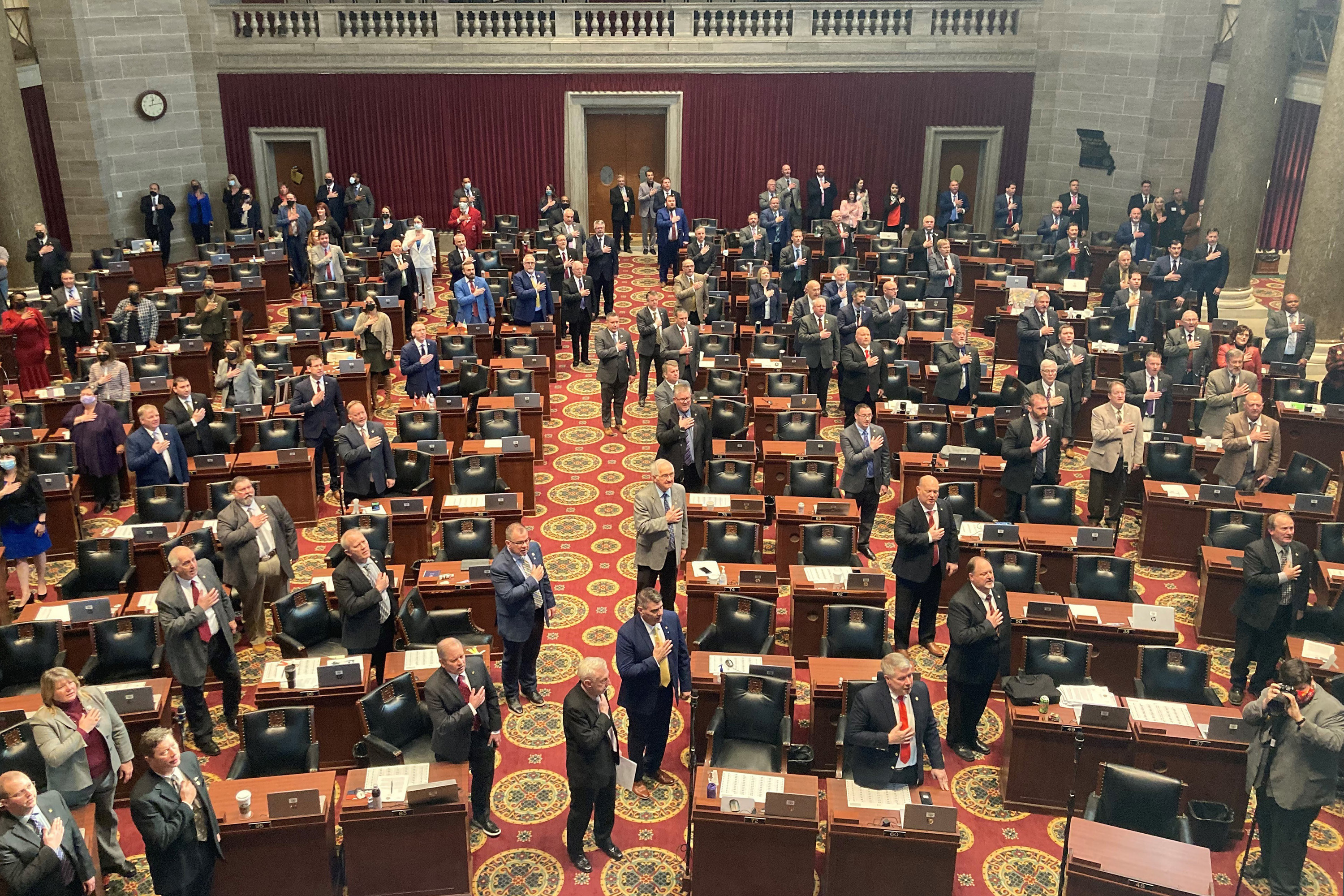 “It is essential to always maintain a formal and professional atmosphere on House floor and to ensure this happens, I have felt compelled to offer this amendment,” she said during Wednesday’s floor debate.

Her initial amendment said women would be required to wear business attire — specifically a “jacket,” which would include “blazers and knit blazers.” After spirited debate, a revised amendment was adopted to clarify that a cardigan could also be worn.

Men in the Missouri House of Representatives were already required to wear a jacket, shirt and a tie. Under the previous dress code, women were required to wear “dresses or skirts or slacks worn with a blazer or sweater and appropriate dress shoes or boots.” A second layer of clothing was not required.

Kelley said ensuring decorum was a key reason behind her proposal — an idea Democrats seized on.

Aune went on to say she has personally been asked about her attire, even though she was following the rules.

“Do you know what it feels like to have a bunch of men in this room looking at your top trying to determine if it’s appropriate or not?” she said.

Virginia Ramseyer Winter, an associate professor at the University of Missouri School of Health Professions and director of the Center for Body Image Research and Policy, said lawmakers shouldn’t have even debated this because it unnecessarily put the focus on the way women look instead of the issues.

“I think it reinforces the idea that we value women more for their appearance above other more important things like their intelligence and their contributions,” she said.

Ramseyer Winter and other critics of the measure said the debate echoed the one over abortion restrictions lawmakers approved last summer after the U.S. Supreme Court overturned Roe v. Wade.

“I do think that it also sends the message that we have to police women’s bodies,” she said.

Rep. Raychel Proudie, a Democrat, took issue with the amendment before it was amended to include “cardigan.” She pointed out that it wouldn’t be easy for pregnant women to comply because “they don’t make jackets or blazers for women who are pregnant. That could be very uncomfortable, particularly in a pro-life state.”

The dress code was a small part of a package of rules that state lawmakers ultimately approved last Wednesday.

“There are some very serious things that are in this rule package that I think we should be debating, but instead we are fighting, again, for a women’s right to choose something. And this time it is how she covers herself,” Proudie said.

Lawmakers in other states have pushed back against dress code rules as sexist and culturally insensitive. Congress’ longstanding ban on sleeveless tops and open-toes shoes generated a fight in 2017 before those rules were updated.

Missouri Republicans said the criticism of the dress code was overdone when all the rules did was clarify what is required.

“It’s a normal process for any entity regarding a professional work environment,” Republican state Rep. Doug Richey said. “We just happen to have a political context that we have to navigate and, because of that, it is ripe for some members to grandstand and try to make it into something that it’s not.”

Still, Rep. Peter Merideth, a Democrat, declined to vote on the dress code amendment because he didn’t want to dare say what was appropriate or inappropriate for women to wear. In the House, there are 43 women and 116 men.

“This is ridiculous,” he said. “Our people sent us here to pass laws … not fight about mandates and rules on women’s clothing.”