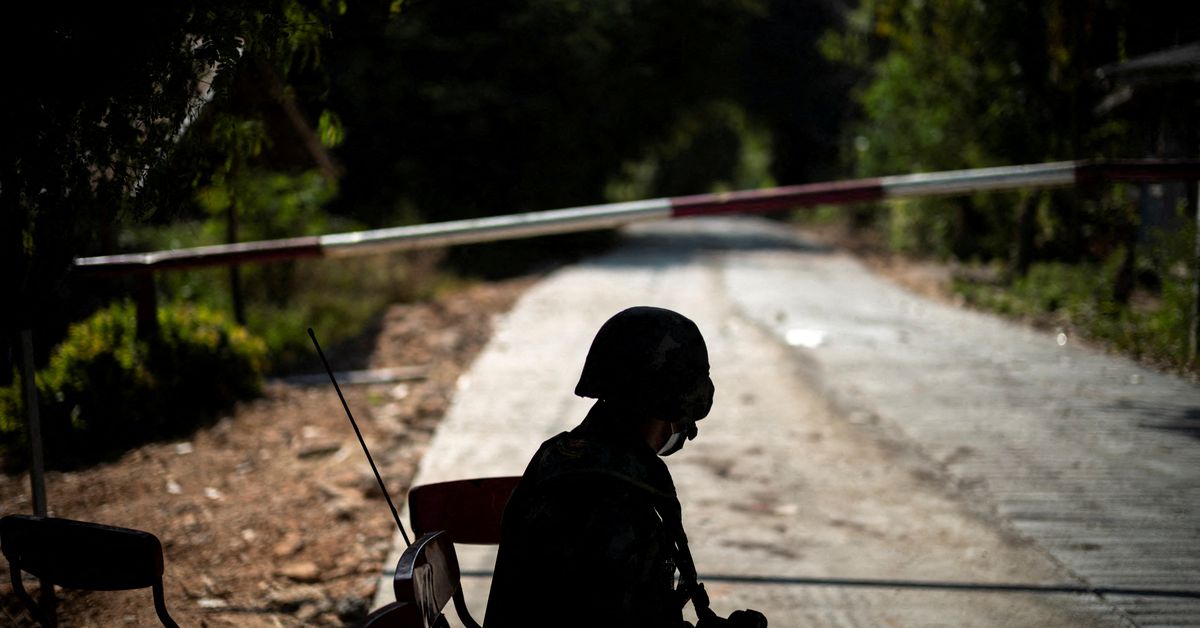 A Thai soldier sits in front of a blocked road leading to the Thailand-Myanmar border where fighting between the Myanmar army and ethnic minority rebels still continues, December 19, 2021. REUTERS/Athit Perawongmetha

BANGKOK, Dec 24 (Reuters) – Myanmar’s military carried out more airstrikes on a rebel-controlled area near the Thai border, the rebel group said on Friday, in the latest escalation of violence that has sent hundreds fleeing into Thailand.

The Karen National Union (KNU) said the military launched at least two airstrikes and fired some artillery rounds on an area under its control near the Thai-Myanmar border late on Thursday.

A Reuters reporter at Mae Sot, a Thai border town some 15 km (10 miles) from where the air strikes reportedly took place, heard several explosions on Thursday evening at around 11 p.m. local time.

A spokesman for the Myanmar’s military junta did not answer calls seeking comment.

Myanmar has been in turmoil since the military ousted a civilian government led by Nobel laureate Aung San Suu Kyi on Feb. 1, triggering protests and sporadic clashes in the countryside between anti-junta militia and the army.

Fresh fighting between the Myanmar military and the KNU broke out last week, and more than 4,200 people have crossed into Thailand since the violence began, Thailand’s foreign ministry said. Civil society groups have said the number of displaced is as high as 10,000.

KNU spokesman Saw Taw Nee told Reuters that the airstrikes have further displaced more civilians living in the area and repeated his group’s call for the international community to established a no-fly zone in the area.

Thailand’s foreign ministry spokesman Tanee Sangrat said at a press conference on Friday that Thailand was concerned about the latest violence in Karen state that also impacted Thai people living along the border.

Several foreign envoys to Myanmar, including from the EU, Britain and the United States, issued a joint statement on Friday calling for an end to “indiscriminate attacks” in Karen state and elsewhere by the military.

“The recent attacks on civilians in Karen State, including the shelling of villages, are a violation of International Humanitarian Law and must stop,” they said.