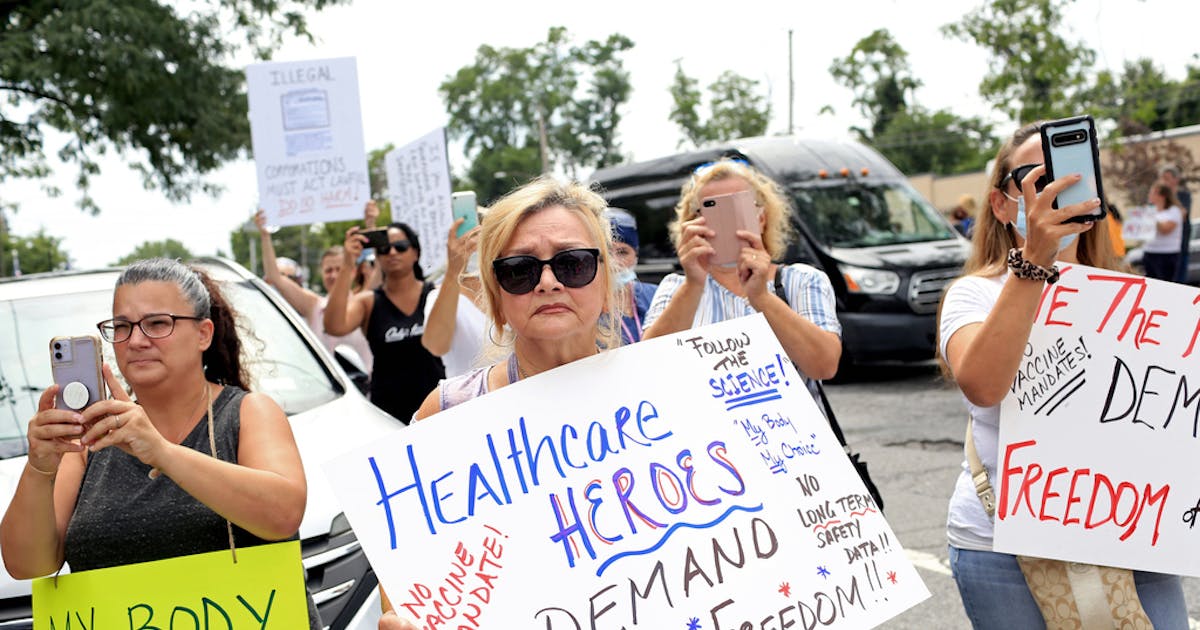 An Upstate New York hospital announced that it will stop delivering babies this month after several staffers in the maternity department resigned over the hospital system’s coronavirus vaccine mandate.

At least six unvaccinated maternity staffers at Lewis County General Hospital have resigned in recent days, and seven others remain undecided on whether to get vaccinated, Gerald Cayer, chief executive officer of the Lewis County Health System, said at a Friday news conference. The staff shortage will result in the hospital being “unable to safely staff” the maternity department beginning Sept. 25, he said.

“The number of resignations received leaves us no choice but to pause delivering babies at Lewis County General Hospital,” Cayer said. “It is my hope that the [New York State] Department of Health will work with us in pausing the service rather than closing the maternity department.”

according to the Watertown Daily Times.

Officials with the Lewis County Health System did not immediately respond to requests for comment.

The announcement comes at a time when health-care workers are pleading with people to get vaccinated to help hospitals overwhelmed by unvaccinated patients. More than 97,000 people nationwide are in the hospital with COVID-19 at this time, with more than a quarter of them in the intensive care unit, according to data compiled by the Washington Post. The American Hospital Association, the nation’s largest hospital association, has called for mandatory vaccinations of all health workers, citing the safety and efficacy of the vaccines.

But as hospitals have implemented vaccination mandates, some staffers have chosen to resign or be fired instead of getting the shots.

More than 150 health-care workers who did not comply with the vaccine mandate at Houston Methodist — one of the first health systems to require the coronavirus shots — resigned or were fired in June. A lawsuit brought by one of those employees — which alleged that the policy was forcing staffers to be “guinea pigs” for vaccines that had not gone through the full Food and Drug Administration approval process — was dismissed by a federal judge. Since then, the Pfizer-BioNTech coronavirus vaccine has been given full FDA approval.

Other instances of pushback have popped up in recent months. In Winchester, Va., some unvaccinated nurses are choosing to be fired in protest of their hospital system’s mandate. Attorneys for 51 Detroit hospital workers on Friday withdrew their lawsuit against the Henry Ford Health System over its vaccination policy the same day that the health system’s vaccine mandate went into effect.

Lewis County, about 90 miles outside Syracuse, has experienced the highest seven-day average for new covid cases of any county in New York state, according to WWNY. The seven-day infection rate in Lewis County is 7.6 percent, Sean Harney, the health system’s chief medical officer, told the Daily Times.

Since then-Gov. Andrew M. Cuomo (D) announced in August that all state health-care workers needed to get their first shot by Sept. 27 or face termination, 30 workers at Lewis County General Hospital have resigned, Cayer said. Most of them were nurses, therapists or technicians. He added that 30 other workers had received at least one dose since the announcement.

Cayer said Friday that he hopes the baby-delivery pause for the hospital’s maternity department, which the hospital describes on its website as “one of the finest in the North Country,” will allow it to bring in vaccinated staff.

“If we can pause the service and now focus on recruiting nurses who are vaccinated, we will be able to reengage in delivering babies here in Lewis County,” he said.

Despite the resignations and the 10 staff members who are in quarantine or isolation, the hospital system stressed that essential services were not at risk because of the mandate and that the policy “ensures we will have a healthy workforce and we are not responsible for [causing COVID] transmission in or out of our facilities.”

Cayer remains hopeful that some of the unvaccinated staffers, including those in the maternity department, will end up getting their first shot before the state’s deadline later this month.

“Our hope is as we get closer [to the deadline],” he said, “the numbers will increase of individuals who are vaccinated, fewer individuals will leave, and, maybe, with a little luck, some of those who have resigned will reconsider.”