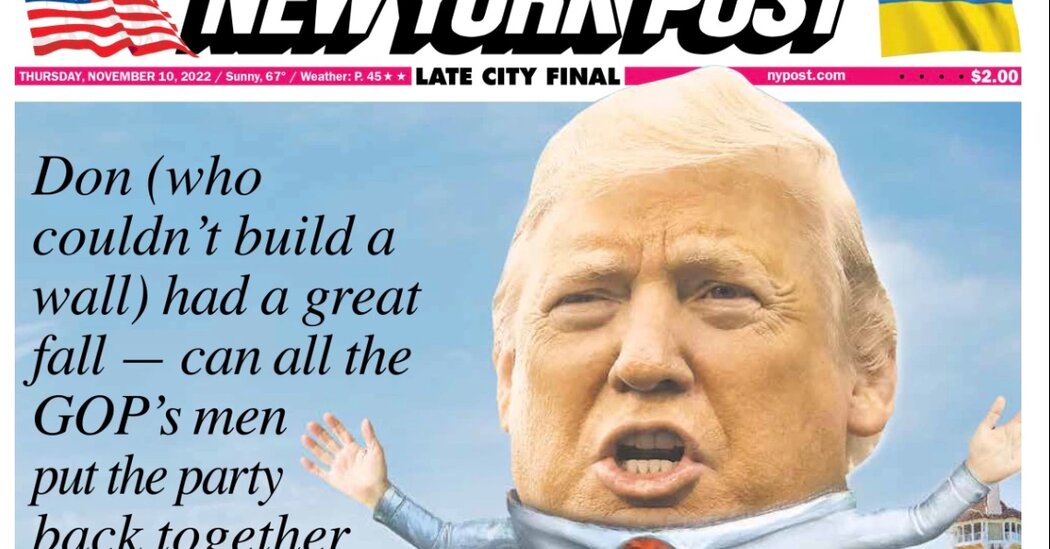 Since Election Day last week, The New York Post’s front pages have been merciless to former President Donald J. Trump. First, the paper heralded his political rival, Gov. Ron DeSantis of Florida, as “DeFUTURE.” A day later, it illustrated Mr. Trump as Humpty Dumpty about to have a great fall.

Then, on Wednesday, the paper relegated Mr. Trump’s announcement about his latest run for president to a small headline at the bottom of the page: “Florida Man Makes Announcement.”

All three covers shot around social media, putting the 221-year-old tabloid at the center of the national discussion about Mr. Trump’s future and elevating its print front page from New York City newsstands to Twitter’s global public square.

The covers also had the news media and political worlds talking about whether the recent Trump coverage was another sign that Rupert Murdoch’s media empire, which includes The Post and Fox News among other news organizations, had broken permanently from the former president after supporting him for years.

Mr. Trump weighed in himself on his Truth Social site, criticizing “the no longer great New York Post.” He added, “Bring back Col!,” a reference to Col Allan, the paper’s former editor in chief.

Many progressives took pleasure in seeing the tabloid turn nasty toward a man it once lavishly praised.

“Just like in Australia and the UK, it’s almost impossible for any conservative politician to survive without the blessing of the billionaire Murdoch empire. Trump is toast …,” Thom Hartmann, the liberal radio talk show host, tweeted.

A Post spokeswoman declined to make Keith Poole, the editor in chief, available for an interview. A spokesman for The Post’s parent company, News Corp, which the Murdochs run, declined to comment.

Editors in The Post’s newsroom now regularly hand down anti-Trump story assignments, according to three current staff members. Mr. Poole is often involved in editing these stories to make sure the tone is right, said the people, who would speak only anonymously for fear of retribution.

Front-page headlines involving politics, usually decided on with input from multiple editors, are now decided on only at the highest level of management, one of the people said. The Post spokeswoman disputed this, saying: “Part of the joy of working at The Post is that anyone can suggest wood headlines. That has never changed.” (Wood is a term used for the front page.)

The staff members said the newsroom had not received an explicit directive on the direction of coverage of Mr. Trump, but the change in tone had been present for months.

The Post, with its conservative bent and cheeky headlines, has long been a favorite of Mr. Murdoch, who bought it in 1976. Mr. Poole took over as editor last year after working at another brash Murdoch tabloid, The Sun in Britain. Mr. Poole’s family has now moved from New York to London, and he spends time in both places.

Throughout Mr. Trump’s first presidential campaign, his tumultuous four years in the Oval Office and his two impeachments, The Post had his back. Two years ago, the paper splashed Mr. Trump’s face across its front page with the headline “Make America great again, again” — promoting its endorsement for a second term.

But The Post and other properties in the Murdoch empire started to ease from their full support of Mr. Trump after he refused to accept that election’s results. Last November, Mr. Murdoch said during a shareholder meeting that conservatives should play an active role in the American political debate, “but that will not happen if President Trump stays focused on the past.”

In July, The Post published an editorial headlined: “Trump’s silence on Jan. 6 is damning.” The editorial said Mr. Trump had proved himself “unworthy to be this country’s chief executive again” because he had done nothing to stop the violence as his followers stormed the Capitol.

Another previously pro-Trump platform in the Murdoch stable, Fox News, has shown some more skepticism toward Mr. Trump in recent months, focusing its attention on other Republicans instead. Fox News faces two blockbuster defamation lawsuits for its role in promoting false claims of election rigging in the 2020 presidential election.

The coverage of Mr. Trump is not all negative. The Post extensively covered the recent Palm Beach wedding of Mr. Trump’s daughter Tiffany, publishing an “exclusive” article with video of Mr. Trump’s toast. It has also continued positive coverage of Mr. Trump’s other daughter, Ivanka Trump, who served in his administration. An article on Thursday included dozens of photos of Ms. Trump in Miami and described her as “relaxed and carefree” after her decision not to re-enter the political arena with her father.

The paper could also revert to more support of Mr. Trump as the presidential campaign unfolds. But the more critical approach was clear in Wednesday’s print article on Mr. Trump’s announcement of his intention to run again. A tiny article on Page 26 covered the news in a total of five paragraphs and did not carry the byline of a reporter but instead was attributed to “Post staff report.”

“With just 720 days to go before the next election, a Florida retiree made the surprise announcement on Tuesday evening that he was running for president,” the article said. “In a move no political pundit saw coming, avid golfer Donald J. Trump kicked things off at Mar-a-Lago, his resort and classified documents library.”

The article referred to his age — Mr. Trump will be 78 in 2024 — and continued: “His cholesterol levels are unknown, but his favorite food is a charred steak with ketchup. He has stated that his qualifications for office include being a ‘stable genius.’ Trump also served as the 45th president.”