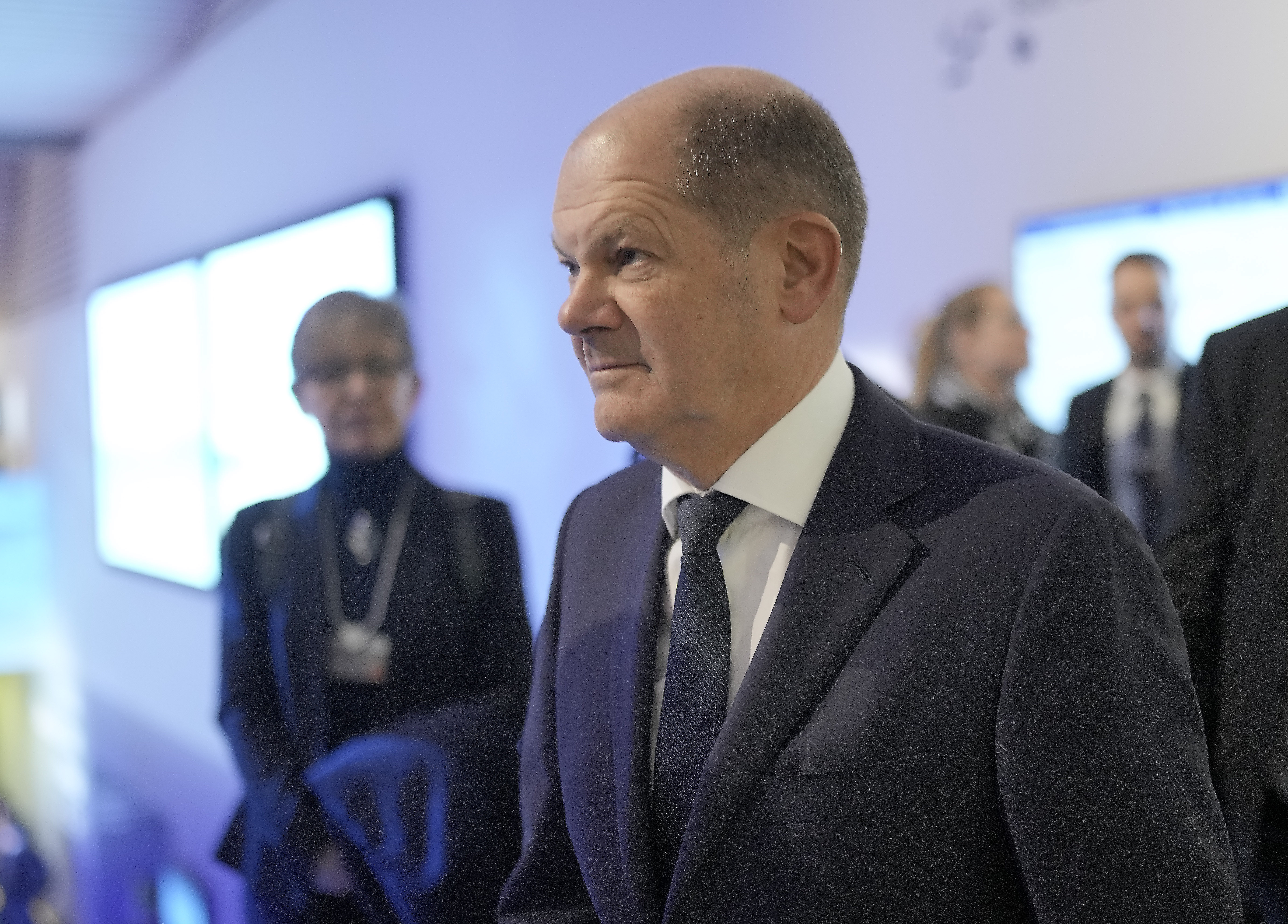 Asked on the sidelines of the glitzy gathering, Coons, the congressional delegation’s leader, declined to confirm the exchange. But, he made sure to say, “we need to find a way to move forward together.”

A German spokesperson said “we are unable to provide you with any further information on the specific content of the confidential conversation.“

But the chancellor hinted at some kind of arrangement with the U.S. during his Davos address.

“We are never doing something just by ourselves, but together with others, especially the United States, which are very important in this common task to defend Ukrainian independence and sovereignty,” he said.

Officials in Kyiv have been pleading for the West to send modern battle tanks ahead of an expected spring offensive by Russia. Several European countries operate German-made Leopard tanks, but aren’t allowed to donate them without Berlin’s permission.

Colin Kahl, the Pentagon’s top policy official, praised Berlin on Wednesday for its contributions to the fight so far, noting that it has supplied a Patriot battery and its Marder infantry fighting vehicles.

But he said there “shouldn’t be a concern” about being the only country to provide tanks, noting that the U.K. is sending its Challenger 2s.

“I think we should give Germany an enormous amount of credit for their generosity toward Ukraine,” Kahl told reporters. But, “if there was a concern about being alone in providing this capability, that shouldn’t be a concern. But at the end of the day, you know, the German government is going to make a sovereign decision.”

German officials have taken the same stance as Scholz in the last few days. By saying the U.S. must move first, they’re trying to fend off pressure from European allies who want to send the German-made tanks to Ukraine but need export approval from Berlin.

Scholz also told President Joe Biden that the U.S. has to give the Abrams first, according to German media reports.

In a video speech to the forum on Thursday, Ukrainian President Volodymyr Zelenskyy criticized Germany’s hesitation.

“When someone says ‘I will give tanks if someone else will also share his tanks’; ‘I’m strong in Europe and I can share if someone outside of Europe will contribute as well’, I don’t think this is the right strategy,” Zelenskyy said.

American lawmakers who aren’t at Davos are infuriated with Germany’s decision.

“The allies have lost focus on the nature of the problem. You either win or you lose,” Sen. Lindsey Graham (R-S.C.) said in a phone interview. “I can’t believe we’re still arguing among ourselves.”

Graham called on the Biden administration to send M1 Abrams tanks to Ukraine immediately because it “will open up the floodgates” by compelling Germany to greenlight the Leopards.

The war is entering a new phase, Kahl said, noting that the Russians are digging trenches, laying mines and fortifying their front lines. To break through these defenses, Ukrainian forces will need to attack enemy units in a deliberate way, using a combination of artillery, tanks, armored vehicles and infantry.

That’s why the U.S. is now sending Bradley Fighting Vehicles, which are tracked armored vehicles armed with TOW missiles and a 25mm cannon. And the Pentagon is looking at other capabilities that will help in the coming fight, Kahl said.

At the same time, the military has begun large-scale training of Ukrainian forces in Germany, which officials say will enhance their fighting skills in the new stage of the war.

“To enable the Ukrainians to break through given Russian defenses, that emphasis shifted to enabling them to combine fire and maneuver in a way that will prove to be more effective,” Kahl said.

Officials said the next package of U.S. weapons, expected to be announced on Friday, will total $2.5 billion and include 50 more Bradleys and, for the first time, 100 Stryker armored combat vehicles. Strykers are eight-wheeled transports that can move faster and carry more troops than Bradleys. But the tracked Bradleys are better at handling muddy conditions, and their powerful armaments make them effective in a direct conflict.

So far, the U.S. has declined to send its M1 Abrams tanks. Kahl noted that the 60-ton, tracked weapon, the Army’s main battle tank, is difficult to operate and maintain.

“The Abrams tank is a very complicated piece of equipment. It’s expensive, it’s hard to train on. It has a jet engine, I think it’s about three gallons to the mile of jet fuel. It is not the easiest system to maintain,” Kahl said. “It may or may not be the right system.”