Congress may not have an infrastructure bill. But at least it has an off-ramp.

Democrats and Republicans forged what appeared to be a compromise on the debt ceiling Wednesday.

Lawmakers sometimes steel their positions so deeply that they can’t extract themselves. They’re stuck on a road to oblivion – as the headlights of a crisis careen down the highway at them.

So everyone searches for an exit.

Such was the case with the debt ceiling. The sides were too entrenched over the politicking of the debt ceiling and the Democrats’ efforts to approve trillions in social spending.

But the realpolitik of a national economic crisis loomed.

“Too many Republicans seem proud of this, pushing us to the edge of default,” said Senate Majority Leader Chuck Schumer, D-N.Y. “Some of them (Republicans) want us to default.”

Schumer teed up a Wednesday afternoon vote to break a filibuster on a bill that would suspend the debt ceiling through December of 2022. Democrats were poised to hold their noses and vote to clear the filibuster. But Republicans vowed to filibuster. If all 50 Democrats voted aye, the Senate was still 10 votes shy of hitting the 60-vote threshold to extinguish the filibuster.

There were warnings of what might happen if the federal government crashed into the debt ceiling. Treasury Secretary Janet Yellen warned that the government wouldn’t have enough money to pay health care benefits to Americans because the U.S. couldn’t borrow to make up the difference.

Senate Minority Leader Mitch McConnell, R-Ky., sidestepped a question from yours truly Tuesday when asked if he had heard from any major bankers or Wall Street titans about the GOP sitting out the debt ceiling fight. It was thought that the investment community would hammer Washington if lawmakers bumbled into a debt ceiling crisis.

The House of Representatives infamously failed to pass a financial rescue package in the fall of 2008 as the Dow cratered a then-record 777 points during the Great Recession. 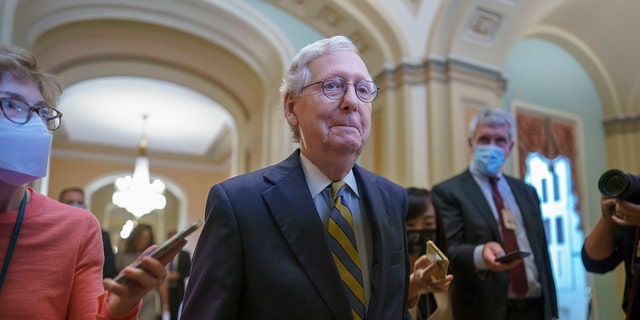 Worry started to permeate Washington that rating agencies could downgrade the creditworthiness of the United States even before October 18 – the deadline Treasury says the U.S. will run out of cash. Standard & Poor’s downgraded the U.S. in 2011 – even though Congress lifted the debt ceiling before a deadline. S&P suggested that Congress injected too much drama into the process. That did little to instill confidence into America’s way of governing.

“The U.S. is AAA-rated. It is on negative watch with S&P,” said Douglas Holtz-Eakin, former Congressional Budget Office Director and President of the American Action Forum. “They are looking for reasons to downgrade the U.S. This could very well be the reason they are looking for. I’m concerned about politics really having the economic fallout that we don’t really like.”

So, now everyone blinked on the debt ceiling.

Democrats will apparently take McConnell’s offer to suspend the debt ceiling for the time being and address it again in December.

And, as is often the case, Congress is poised to have another messy holiday season – especially with government funding slated to lapse December 3. 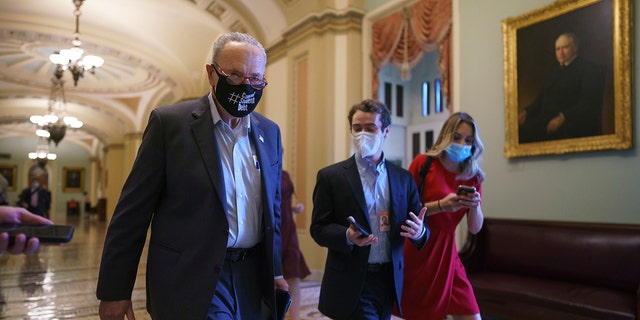 Let’s start with McConnell. He’s looking toward the midterm elections. McConnell wanted to underscore the chaos of a unified Democratic government, struggling to lift the debt ceiling. He said Democrats could go it alone. McConnell punctuated his point, noting that Democrats were so focused on passing trillion in new, social spending.

The GOP play is to get Democrats on the record twice on the debt ceiling. Once now and in December. Getting out of the way would also enable Democrats to pass their social spending package. Republicans hope to hammer Democrats over that in 2022.

Schumer is also eyeing the midterms. He hoped to portray the GOP as obstructionists on the debt ceiling. But he knew that a crisis with the debt ceiling would hijack the Democratic agenda. Democrats couldn’t afford an economic crisis, a market shock, layoffs and a bankrupt Treasury – all tied to the debt ceiling. This would undercut the Biden presidency.

If Congress was hip-deep on the debt ceiling, there was no way Democrats could advance their social spending package in a few weeks.

So, there was a benefit to both sides to craft a pact.

The immediate reaction to McConnell’s offer was mixed. Multiple GOP senators declined to comment just after the Kentucky Republican briefed his members on the offer during the weekly party lunch at the Capitol.

Democrats were all over the place, ranging from the thoughtful to the baffled to the knee-jerk reaction.

“I would certainly consider (McConnell’s offer),” said Sen. Chris Coons, D-Del. “It depends on the terms.”

“I don’t get it,” complained Sen. Chris Murphy, D-Conn. “Why has (McConnell) created these Rube Goldberg-like schemes…this is getting ridiculous.”

McConnell has long said Democrats should use the special, filibuster-exempt process known as budget reconciliation to approve the debt ceiling package. Still, Democrats said they wouldn’t use reconciliation.

It’s unclear if this will blow everything up.

“If Democrats want to raise the debt ceiling, they can use the reconciliation process,” said Sen. Lindsey Graham, R-S.C., the top GOPer on the Budget Committee. “I will try to make the process as smooth as possible.”

Remember that this is only a Band-Aid fix for the debt limit. The same with the interim spending bill which is funding the government through early December.

“We need a new form of fiscal restraint rather than a debt ceiling,” said Robert Bixby of the Concord Coalition. “The debt ceiling really isn’t cutting it. It doesn’t work and it’s got dangers that we’re seeing now.”

That’s why rather than actually addressing the problem, Congress just pulled over to the rest stop.

Dem Rep. Murphy appears to flip off NRCC staffer
Melissa DeRosa spotted boarding helicopter with Cuomo after his resignation
Schumer moves to close down debate on $550B infrastructure bill