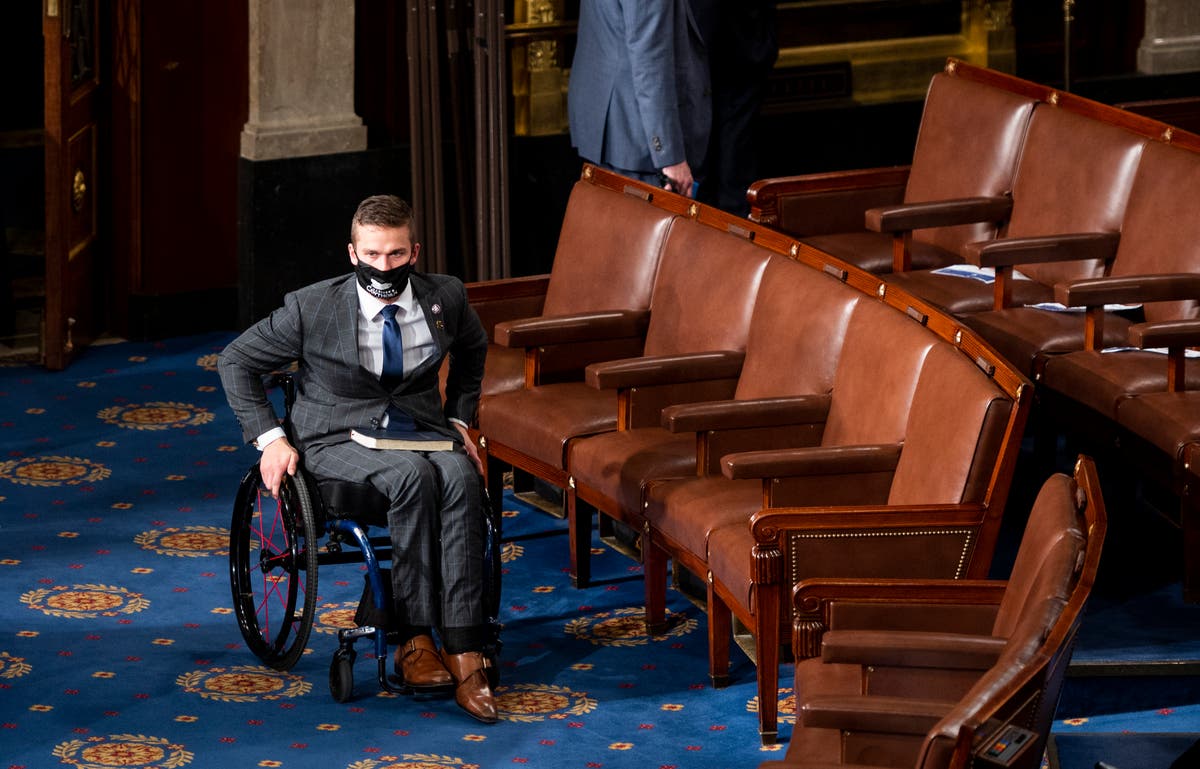 A Bernie Sanders-backed group has launched a long-shot bid to keep North Carolina Representative Madison Cawthorne off the ballot in this year’s midterms by claiming his alleged support for the 6 January insurrection renders him ineligible to serve in Congress.

A petition by a group of Tarheel State voters who are making the challenge to Mr Cawthorne’s eligibility was filed with the North Carolina state board of elections last week as part of a campaign progressive groups Free Speech for People and Our Revolution are staging in hopes of using an obscure section of the 14th Amendment to keep a number of GOP figures from seeking reelection.

Enacted in 1868 as part of the Reconstruction process after the US Civil War, the 14th Amendment is now mainly known for guaranteeing birthright citizenship to anyone born on American soil, and for its guarantees of “due process” and “equal protection” to all citizens.

But the challengers opposing Mr Cawthorne’s candidacy hope the board will apply a North Carolina law allowing them to challenge a candidate’s eligibility by filing an affidavit articulating their “reasonable suspicion” that he is barred from holding officer under the third section of the amendment, which states that “no person shall be a … representative in Congress … or hold any office … under the United States … who, having previously taken an oath, as a member of Congress … to support the Constitution of the United States, shall have engaged in insurrection or rebellion against the same, or given aid or comfort to the enemies thereof”.

The amendment does not lay out how such ineligibility would be determined, but in practice the House and Senate have invoked it by a simple majority vote against prospective members. Congress has done so only once since the end of the 19th century when it blocked a Socialist Party of America member named Victor Berger from taking office as a representative from Wisconsin.

Berger, who had been convicted of violating the Espionage Act by opposing the US entry into the First World War, later successfully sued to have his conviction overturned, removing his ineligibility and allowing him to serve three terms in Congress.

The petition against Mr Cawthorne does not accuse him of violating any laws that would bar his eligibility, but alleges that his support for the protests organised on 6 January — including his appearance at the rally on the Ellipse which later featured then-president Donald Trump — combined with his vote against certifying the election amount to involvement “with, at minimum, the planning of events that led to the insurrection”.

One of the voters who signed the petition, Claude Boisson, said in a statement that he did so because he thought the events of 6 January were on par with the coup in his native Haiti that put dictator “Papa Doc” Duvalier into power.

“As I watched the Capitol insurrection, I realized that I’ve seen this movie before. As a child, I saw “Papa Doc” Duvalier take control of Haiti and rule as a dictator … I joined this action because I want to do everything I can to prevent authoritarians from taking power here,” he said.

A spokesperson for Mr Cawthorne, Luke Ball, told the Miami Herald in response that the petitioners “are comically misinterpreting and twisting the 14th amendment for political gain”.