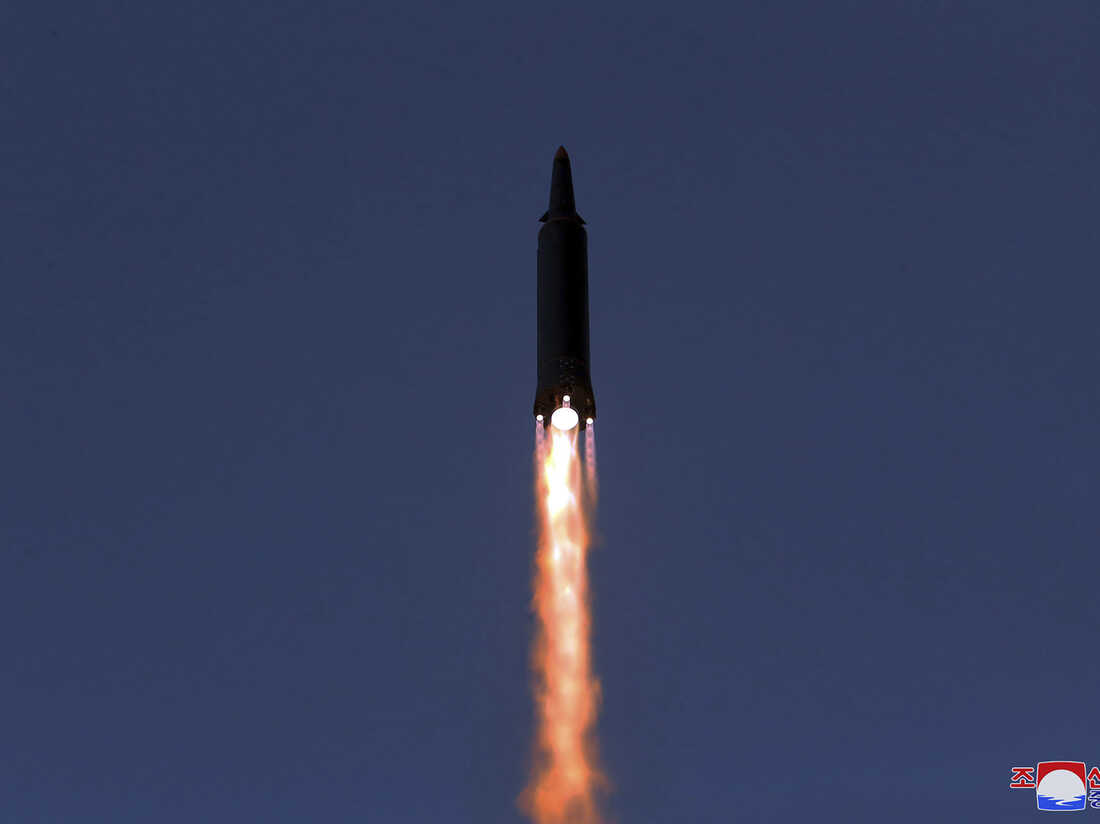 This photo provided by the North Korean government shows what it says a test launch of a hypersonic missile on Jan. 11. Korean Central News Agency/AP hide caption 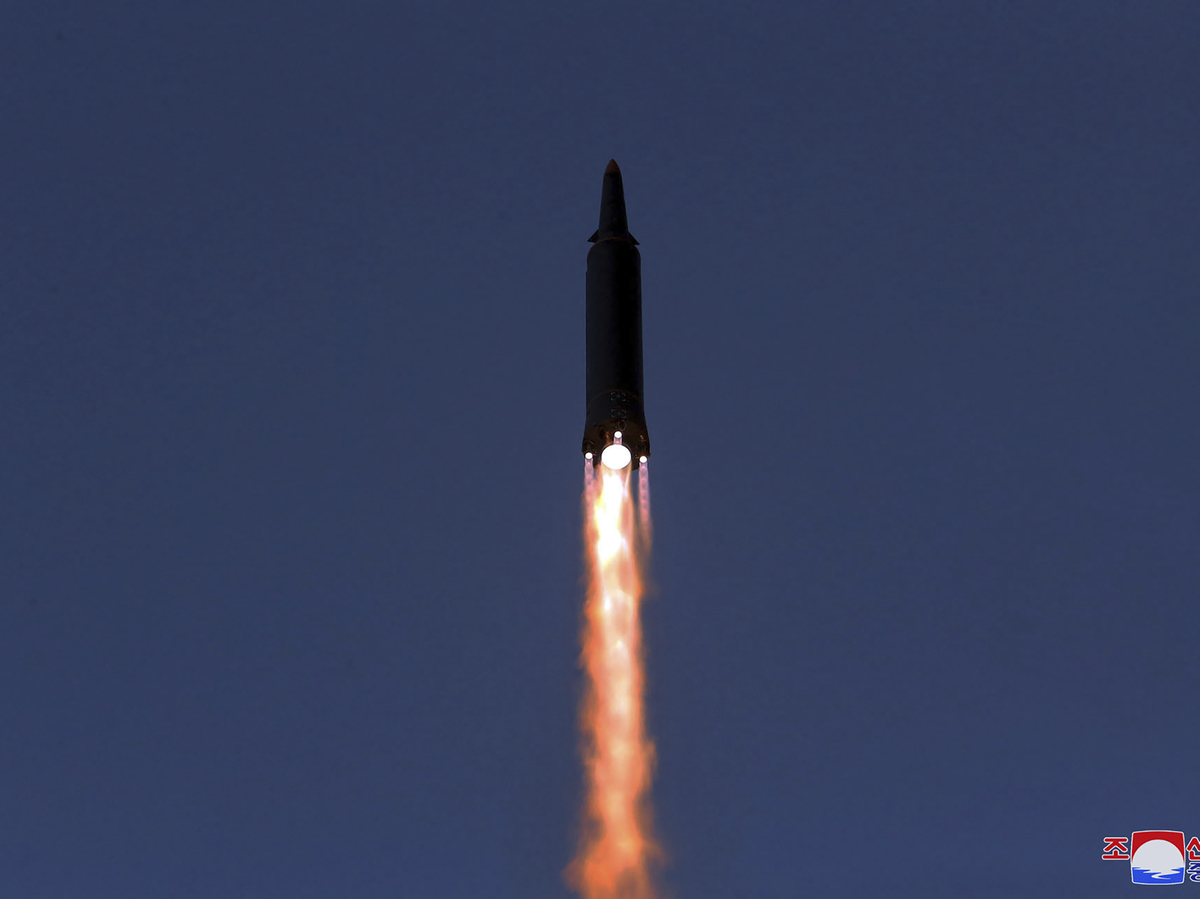 This photo provided by the North Korean government shows what it says a test launch of a hypersonic missile on Jan. 11.

The U.S., Russia and China all have them. And now, North Korea claims to as well: hypersonic weapons.

These aerial vehicles go a step further than the kind of ballistic missiles that Pyongyang has periodically tested over the years. They can fly fast and maneuver in ways that make them extremely difficult to detect and destroy.

It’s a developmental leap that North Korea appears to have quickly bridged. If fully realized, the new capability could present a significant challenge to U.S.- and South Korean-based missile defense systems.

This week Pyongyang conducted several ballistic missile tests, including more of a hypersonic missile, thought to be either a further development of the Hwasong-8 it first launched in September, or possibly an entirely new weapon.

The Biden administration responded on Wednesday with its first sanctions on the Northeast Asian nation — against several North Korean nationals, a Russian and a Russian firm that Washington says helped Pyongyang “illegally procure goods for weapons.” Four of the sanctioned North Koreans are living in China.

What are hypersonic weapons and who has them?

There are basically three types of hypersonic weapons — guided ballistic missiles, with warheads that can be steered to a target; hypersonic glide vehicles, launched by a rocket before gliding to a target; and hypersonic cruise missiles, that are powered by high-speed, air-breathing engines.

These weapons can have a variety of ranges and can carry either conventional or nuclear warheads, depending on their design.

Despite the name, it is the ability of hypersonic weapons to make quick course changes on their “terminal phase” near a target that is more important in evading countermeasures than is speed. By definition, hypersonic weapons fly at five times or more the speed of sound, or Mach 5. But an article in the Bulletin of the Atomic Scientists notes that the V-2, the first modern ballistic missile developed by Nazi Germany during World War II, was capable of a speed just under Mach 5. “More modern intermediate and long-range ballistic missiles travel much faster—Mach 15 and higher,” according to the Bulletin.

North Korea’s first test in September is believed to have been of a guided ballistic missile. Also known as a maneuverable reentry vehicle, it is the least sophisticated of the three types and they’ve been found in the arsenals of the major military powers for decades. However, the latest North Korean test is thought to have been of a more advanced boost-glide vehicle.

James Acton, co-director of the Nuclear Policy Program at the Carnegie Endowment for International Peace, acknowledges that if the map of the flight path put out by North Korea is accurate, this week’s test represents “a somewhat more sophisticated capability than I was expecting North Korea to have tested.”

Acton tells NPR that he doesn’t think Pyongyang’s capabilities match those of the U.S., Russia or China, but “if their propaganda reflects what actually happened in the test … there is a notable degree of capability.” 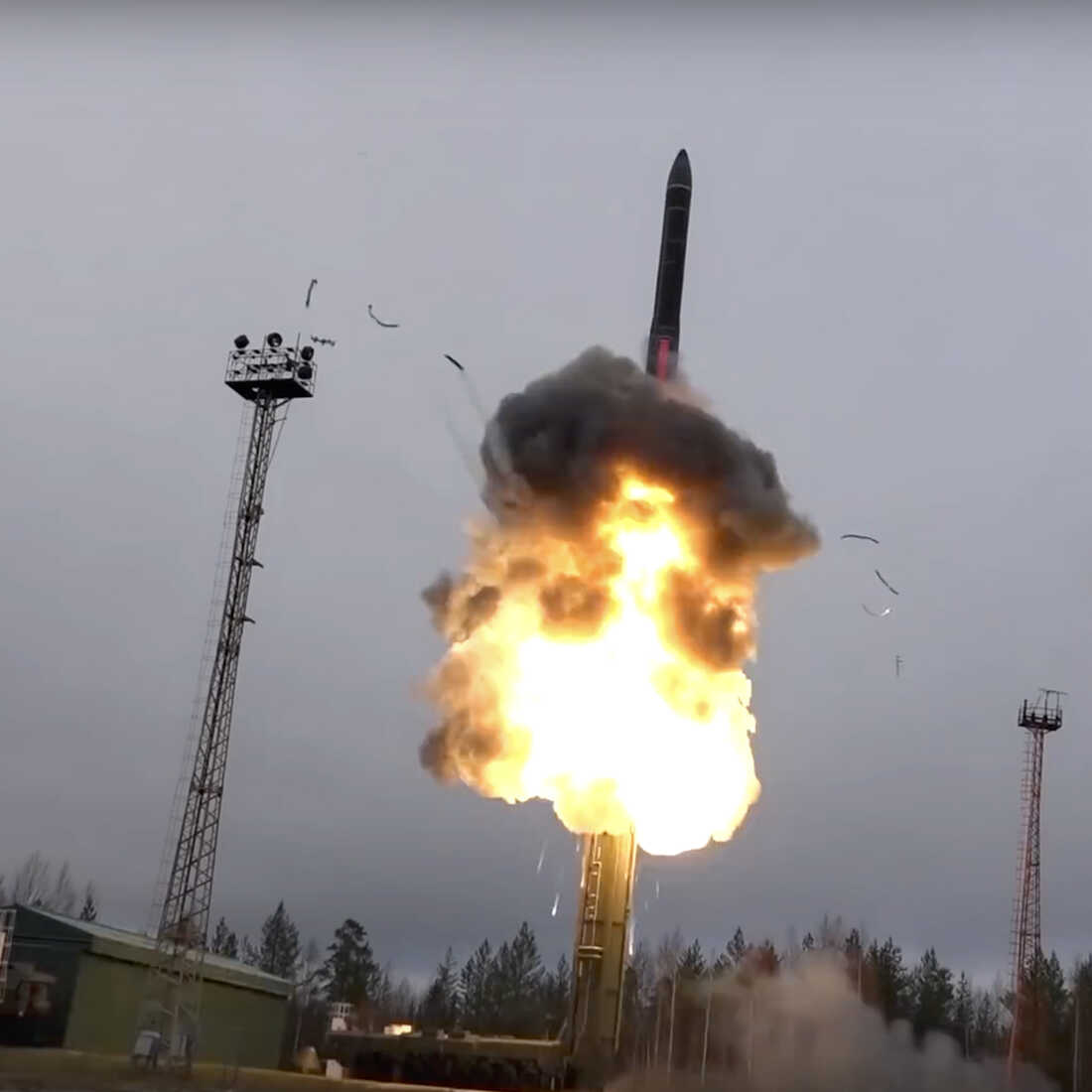 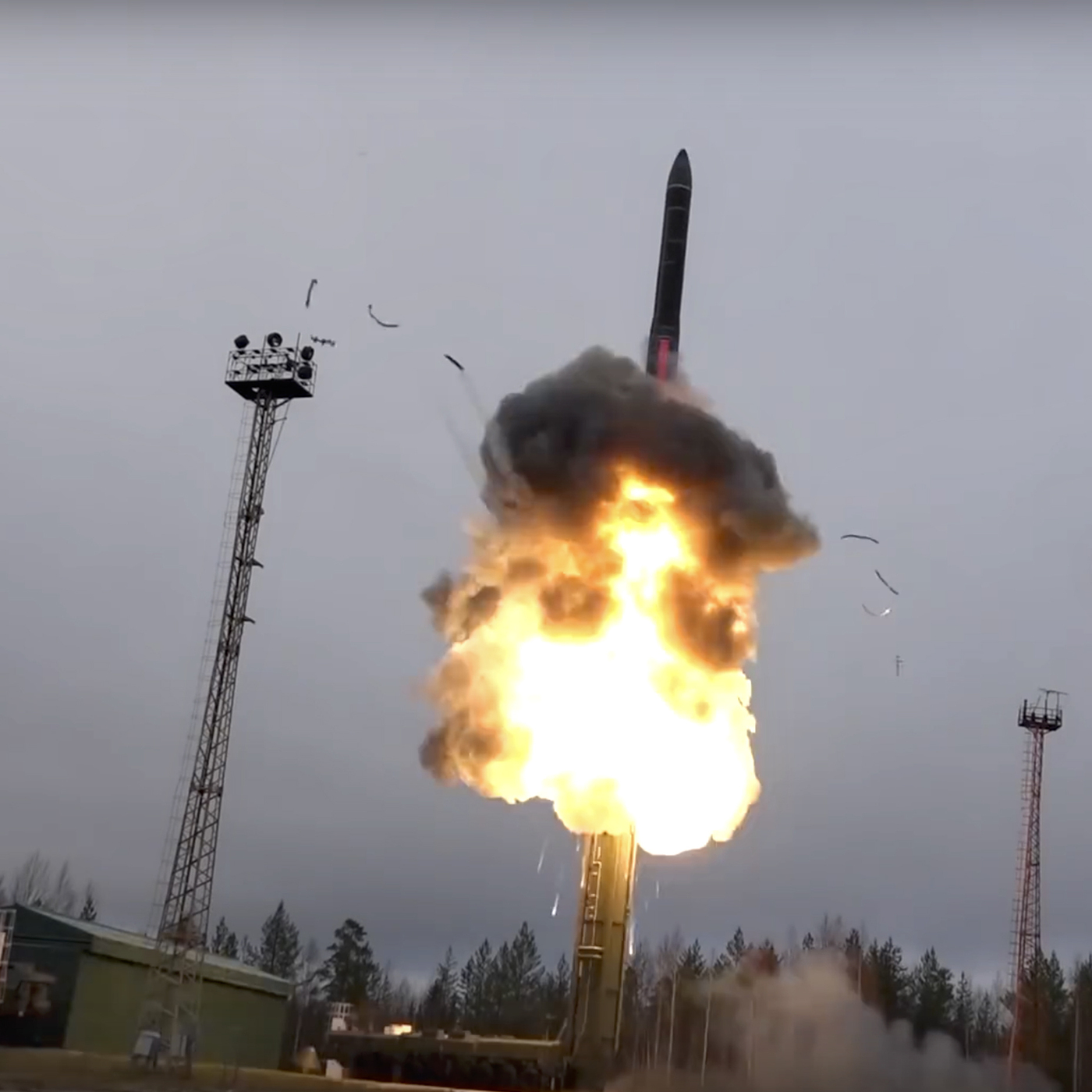 An Avangard ballistic missile lifts off from a truck-mounted launcher somewhere in Russia, in an undated photo from footage distributed by Russian Defense Ministry Press Service.

Russia has already fielded the Avangard, a hypersonic glide vehicle. The Kremlin claims it can fly at Mach 27, or 27 times the speed of sound and it is thought to be capable of turning sharply in flight to evade interception. Last month, Russia says it carried out multiple successful tests from surface ships and submarines of an even more sophisticated hypersonic cruise missile, known as Zircon.

To understand China’s orbital weapon, “imagine the space shuttle, put a nuclear weapon in the cargo bay and then don’t bother with the landing gear,” Jeffrey Lewis, a professor at the Middlebury Institute of International Studies at Monterey, told NPR in October.

While Russia has generally boasted about the new capabilities, China has mostly stuck to denials.

By contrast, the U.S. has lagged well behind in hypersonics in recent years. In October, Gen. Mark Milley, chairman of the Joint Chiefs of Staff, described China’s development curve as “very close to” a “Sputnik moment,” referring to the Soviet launch of the world’s first artificial satellite that spurred a space race with the U.S. 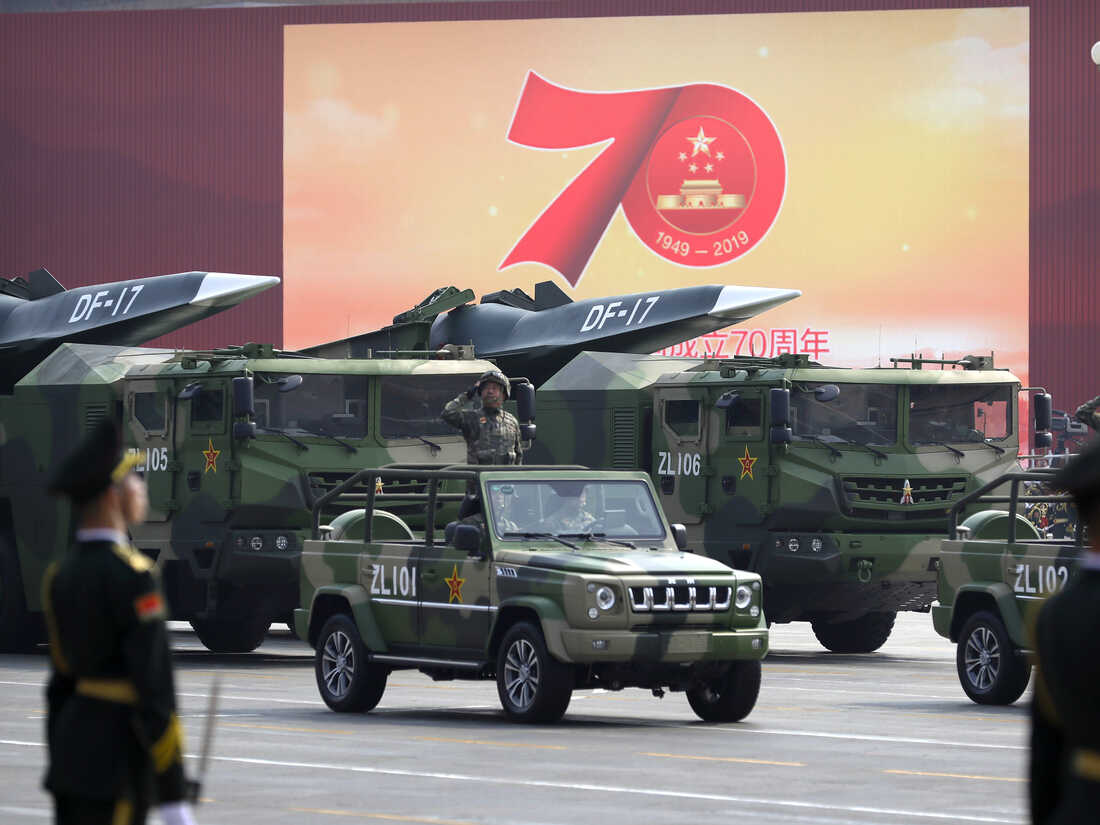 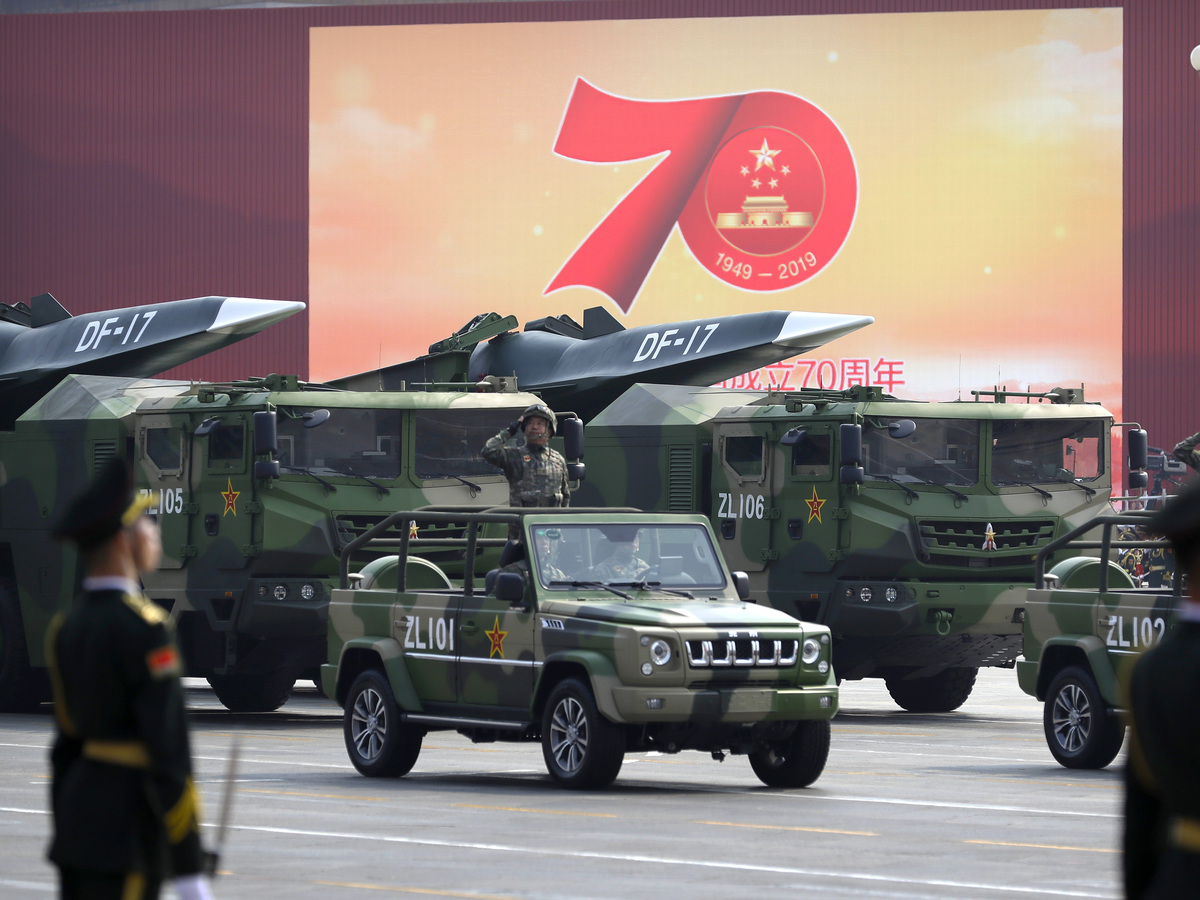 Chinese military vehicles carrying DF-17 ballistic missiles roll during a parade to commemorate the 70th anniversary of the founding of Communist China in Beijing, Tuesday, Oct. 1, 2019.

Commenting last month on a report about China’s test in July, Defense Secretary Lloyd Austin told reporters that such tests “will only increase tensions in the region.”

“China is a challenge, and we’re going to remain focused on that,” Austin said.

Why are hypersonic weapons so dangerous?

From a technical standpoint, the speed, but mostly the maneuverability, of such weapons gives them the potential to evade defensive systems. Not only are they difficult to detect, but their ability to make radical course changes as they get close to a target is meant to evade interception.

“If you can’t deter it and you can’t defend against it, then the only other option is preemption,” says Victor Cha, a senior vice president and Korea chair at the Center for Strategic and International Studies.

It’s notable that after the recent tests, South Korean presidential candidate Yoon Suk-yeol this week suggested just such an option. “Missiles that travel at speeds over Mach 5, if they are loaded with nuclear warheads, will reach the Seoul metropolitan area in less than a minute. Interception is practically impossible,” Yoon said.

“In that case, the only method to prevent them is conducting a preemptive strike when we detect signs [of a launch],” he said, although he also emphasized the need “to keep pressuring North Korea through diplomacy.”

Cha, who served on the National Security Council during the George W. Bush administration, says U.S. missile defense systems, are “good,” but they are mostly “geared towards stopping a handful of fairly primitive missiles from North Korea.”

“[T]hey would need to be improved to be able to handle more sophisticated sorts of missiles,” he tells NPR.

Inevitably, Pyongyang’s development of hypersonic weapons “will raise discussions about whether … the South Koreans or the U.S. and South Korea should have more offensive strike capabilities,” Cha says.

How significant is the short-term threat?

Despite the apparent alarm at North Korean advances, there are experts who say that the threat may be overwrought.

Acton says that he’s not convinced that hypersonic weapons are substantially harder to intercept than conventional ballistic missiles.

“Intercepting ballistic missiles is by no means straightforward,” he acknowledges. With some modifications, the Terminal High Altitude Area Defense system, or THAAD, a U.S. missile defense system that’s been deployed to South Korea, might be able to work against hypersonics, too, he says.

“[I]t’s not clear to me that is going to be that much less effective against maneuvering hypersonic systems than against ballistic missiles,” he says.

Others have noted that technologies such as the orbital weapon China tested last year are not new at all. Russia tested one six decades ago, during the Cold War.

Adam Mount, director of the Defense Posture Project at the Federation of American Scientists, suggests that hypersonic weapons would be something akin to just another quiver in North Korea’s arsenal, albeit potentially a pretty effective one.

“It’s shrug worthy by objective standards,” Tierney tells NPR. “But of course, it’s very useful to people in the defense industry and the military to hype it up, because that’s how you get more money in the budget.”

Tierney cautions that Pyongyang’s claims may be exaggerated and suspects that the real value for North Korea to hype hypersonic weapons is propaganda, not military efficacy.

However, others are more circumspect. Cha points out that North Korea’s capabilities have been repeatedly underestimated in the past — much to the West’s chagrin. First cold water was poured on Pyongyang’s nuclear program. Then ballistic missiles. And even cyber warfare.

“They will test something. It won’t work and the experts will say, ‘Oh, you know, they’re trying to achieve some capability, but they’re still a long way off,'” he says. “Then they do it.”