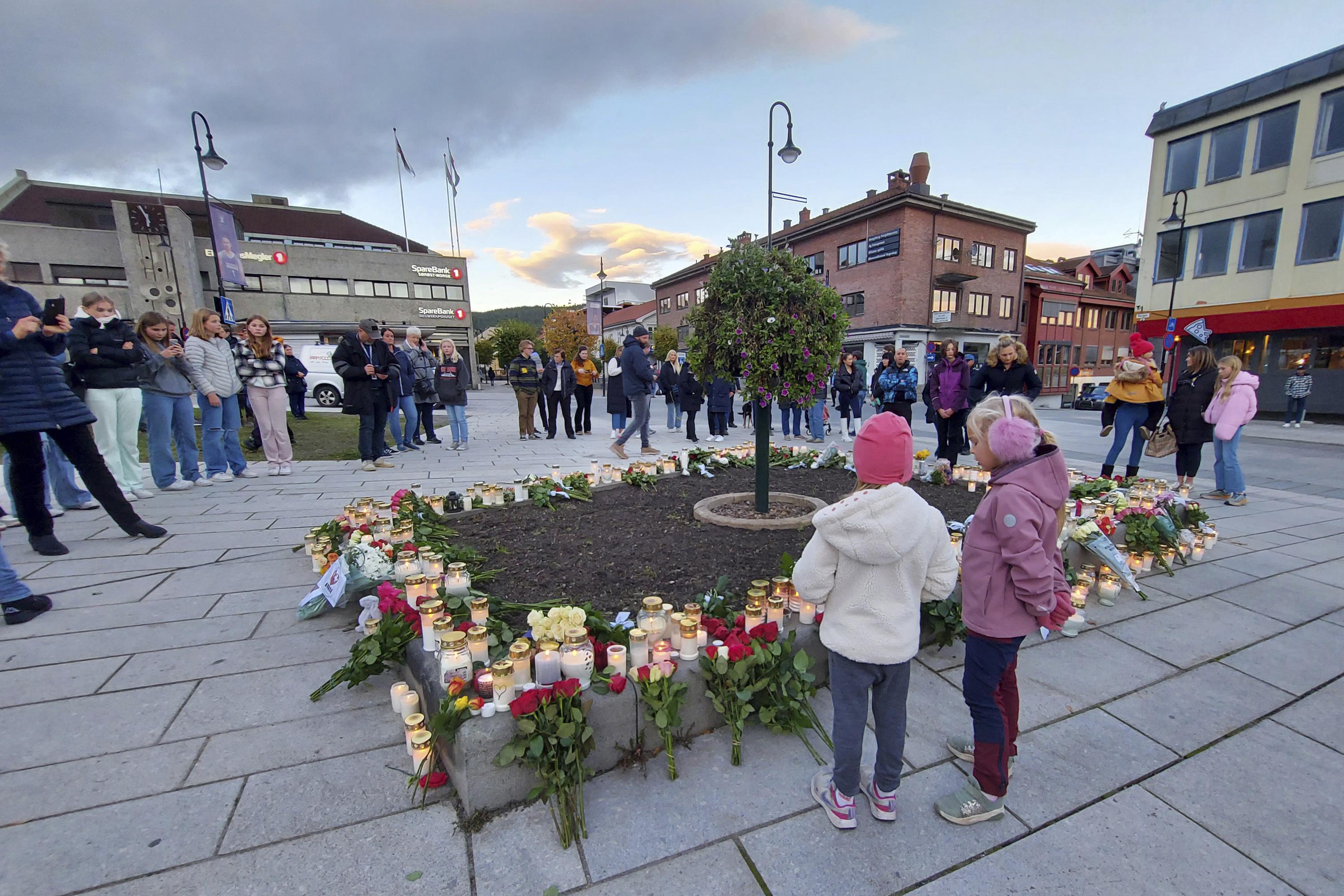 KONGSBERG, Norway (AP) — The bow-and-arrow rampage by a man who killed five people in a small town near Norway’s capital appeared to be a terrorist act, authorities said Thursday, a bizarre and shocking attack in a Scandinavian country where violent crime is rare.

Police identified the attacker as Espen Andersen Braathen, a 37-year-old Danish citizen, who was arrested on the street Wednesday night. They said he used the bow and arrow and possibly other weapons to randomly target people at a supermarket and other locations in Kongsberg, a town of about 26,000 where he lived.

Witnesses said their quiet neighborhood of wooden houses and birch trees was turned into a scene of terrifying cries and turmoil.

“The screaming was so intense and horrifying there was never any doubt something very serious was going on,” said Kurt Einar Voldseth, who had returned home from an errand when he heard the commotion. “I can only describe it as a ‘death scream,’ and it burned into my mind.”

Four women and one man between the ages of 50 and 70 were killed, and three other people were wounded, police said.

Andersen Braathen is being held on preliminary charges and will face a custody hearing Friday. Police said they believe he acted alone.

“The whole act appears to be an act of terror,” said Hans Sverre Sjoevold, head of Norway’s domestic intelligence service, known as the PST.

”We do not know what the motivation of the perpetrator is,” Sjoevold said in English. “We have to wait for the outcome of the investigation.”

He said the suspect was known to the PST, but he declined to elaborate. The agency said the terror threat level for Norway remained unchanged at “moderate.”

Regional Police Chief Ole B. Saeverud described the man as a Muslim convert and said there “earlier had been worries of the man having been radicalized,” but he did not elaborate or say why he was previously flagged or what authorities did in response.

Norwegian media reported the suspect had a conviction for burglary and drug possession, and last year a court granted a restraining order for him to stay away from his parents for six months after threatening to kill one of them.

Svane Mathiassen told broadcaster NRK the suspect will be examined by forensic psychiatric experts, which is “not unusual in such serious cases.”

Police were alerted to a man shooting arrows about 6:15 p.m. and arrested him about 30 minutes later. Regional prosecutor Ann Iren Svane Mathiassen, told The Associated Press that after his arrest, he “clearly described what he had done. He admitted killing the five people.”

She said the bow and arrows were just part of the attacker’s arsenal. Police have not said what other weapons were used, but Voldseth told the AP that when he ran toward the sound of screams, he saw a woman being stabbed by a man with some kind of weapon.

Voldseth said he recognized the attacker, saying he lived nearby and “usually walks with his head down and headphones on.”

“I have only spoken to him a few times, but I have had the impression he might be a person with problems,” he said.

Mass killings are rare in low-crime Norway, and the attack immediately recalled the country’s worst peacetime slaughter a decade ago, when a right-wing domestic extremist killed 77 people with a bomb, a rifle and a pistol.

People have “experienced that their safe local environment suddenly became a dangerous place,” King Harald V said. “It shakes us all when horrible things happen near us, when you least expect it, in the middle of everyday life on the open street.”

“This is unreal. But the reality is that five people have been killed, many are injured and many are in shock,” Gahr Stoere told NRK.

Dozens of people saw the killings. Erik Benum, who lives on the same road as the supermarket that was attacked, told AP he saw shop workers taking shelter in doorways.

“I saw them hiding in the corner. Then I went to see what was happening, and I saw the police moving in with a shield and rifles. It was a very strange sight,” Benum said.

Police, along with reinforcements from other cities, flooded into Kongsberg and blocked several roads. The blue lights of emergency vehicles and spotlights from a helicopter illuminated the scene.

On Thursday morning, the whole town was eerily quiet, he said.

Flags were lowered to half-staff, and residents placed flowers, candles and stuffed animals around a makeshift memorial in a central square.

“The town was attacked last night and five people died. I think most of the inhabitants are in quite a shock that such a thing could happen here. This is a quiet town, a quiet municipality,” she said, adding that health and social services officials are working to care for those who need assistance.

The main church in Kongsberg also was open for those needing comfort.

“I don’t think anyone expects to have these kinds of experiences. But nobody could imagine this could happen here in our little town,” the Rev. Reidar Aasboe told the AP.

Olsen reported from Copenhagen, Denmark, and Lewis from London.

Astronauts Give Us a Delightful Look at What the Olympics Would Be Like in Space - Gizmodo
'I am frightened by what is coming': Texas officials scramble to staff hospitals as Covid-19 surge c...
Texas Senate passes sweeping voting bill following Dem jaunt to DC - New York Post