If you had $10,000 to invest at the beginning of 2016 and bought shares of Nvidia (NASDAQ:NVDA) using that money, your initial investment would be worth just about $250,000 right now. 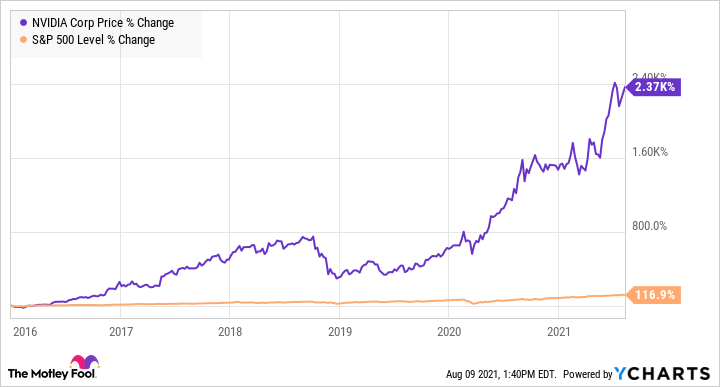 Nvidia has beaten the broader market handsomely over the years thanks to its strong suite of products, which has helped it attract millions of customers and dominate a fast-growing space. It is now offering products that deliver more bang for their buck to existing customers, allowing it to increase average selling prices (ASPs) and bring new customers into the fold. As such, Nvidia can repeat — or improve upon — its terrific stock market performance once again in the coming years.

Let’s look at the reasons why.

Nvidia’s outstanding growth can last for a long time

Nvidia’s dominance of the GPU (graphics processing unit) market has accelerated its revenue and earnings growth over the years. In fiscal 2016, the company had reported just $5 billion in annual revenue and $929 million in adjusted net income. In fiscal 2021, which ended in January this year, Nvidia’s annual revenue had ballooned to $16.7 billion and adjusted net income had jumped to $6.2 billion.

This translates into a compound annual revenue growth rate of 27% over the five-year period, while the non-GAAP net income grew 46% per year. Of late, Nvidia has been outpacing its historical growth. Its revenue for the first quarter of fiscal 2022 surged 84% year over year to $5.66 billion, while adjusted net income was up 107% to $2.3 billion.

Analysts forecast that Nvidia’s surge will continue this fiscal year, with revenue expected to jump 49% over last year and earnings per share anticipated to increase to the tune of 58%. I think that Nvidia can sustain its outstanding growth beyond this year because of a few simple reasons.

First, Nvidia controls 80% of the discrete GPU market, according to Jon Peddie Research. The discrete GPU market is expected to generate $54 billion in annual revenue by 2025 as compared to $23.6 billion last year. Nvidia’s market share puts it in pole position to corner a major chunk of the additional revenue opportunity, and it is unlikely to yield ground to smaller rival Advanced Micro Devices (NASDAQ:AMD) because of its technological advantage.

According to a survey by game distribution service Steam, Nvidia’s flagship RTX 3090 card is outselling AMD’s latest RX 6000 series cards by a ratio of 11:1. What’s surprising is that the RTX 3090 is outperforming AMD’s entire lineup despite its high starting price of $1,499, which makes it significantly more expensive than AMD’s flagship RX 6900 XT that starts at $999.

The reason why this may be the case is that Nvidia’s latest RTX 30 series cards outperform AMD’s offerings as per independent benchmarks and are also priced competitively. For instance, the RTX 3080 that starts at $699 reportedly outperforms the pricier RX 6900 XT. Meanwhile, Nvidia takes a substantial lead when it comes to identically priced offerings. The RTX 3070 Ti that starts at $599 is reportedly 21% faster than AMD’s RX 6800 that starts at $579, indicating that Nvidia offers more bang for the buck.

As a result, Nvidia is commanding a higher price from customers for its RTX 30 series cards. The average selling price of Nvidia’s RTX 30 series cards hit $360 in the first six months of their launch, up 20% from the previous generation Turing cards.

With the gaming business producing 49% of Nvidia’s total revenue in Q1, the bright prospects of this segment will play a critical role in helping the company deliver solid upside to investors in the future. This, however, isn’t the only catalyst to look out for. 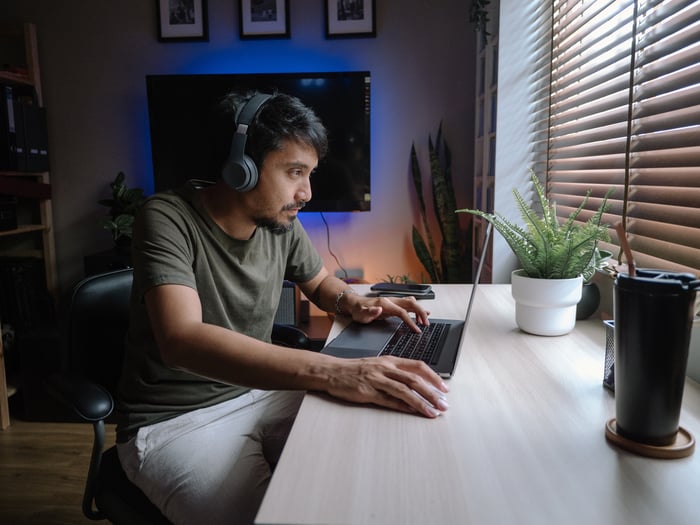 While Nvidia’s gaming business will provide the base for its long-term growth, its data center and automotive businesses will bring additional catalysts into play.

The data center segment, for instance, generated just $339 million in revenue in fiscal 2016. The segment’s fiscal 2021 revenue jumped to $6.7 billion and accounted for 40% of the total revenue. Nvidia investors can expect the data center business to keep booming as the company is attacking a substantial opportunity in this space through multiple chip platforms.

Nvidia’s data center GPUs are already a hit among major cloud service providers thanks to their ability to tackle artificial intelligence and machine learning workloads. The company is now doubling down on new opportunities such as data processing units (DPUs) and CPUs (central processing units), strengthening its position in the data center accelerator space.

According to a third-party estimate, the data center accelerator market was worth $4.2 billion last year. That number is expected to jump to $53 billion by 2025, opening another huge opportunity for the chipmaker. And finally, the automotive segment is expected to turn into another happy hunting ground for Nvidia.

The company generated just $536 million in revenue from the automotive segment last year. However, Nvidia says that it has built an automotive design win pipeline worth over $8 billion through fiscal 2027, partnering with several well-known OEMs (original equipment manufacturers) such as Mercedes-Benz, Audi, Hyundai, Volvo, Navistar, and others. So, Nvidia’s automotive business seems ready to step on the gas.

In the end, it can be said that Nvidia now has bigger growth drivers compared to 2016. More importantly, it is in a strong position to tap into the multibillion-dollar end-market opportunities, making it a top growth stock investors can comfortably buy and hold for at least the next five years.

This article represents the opinion of the writer, who may disagree with the “official” recommendation position of a Motley Fool premium advisory service. We’re motley! Questioning an investing thesis — even one of our own — helps us all think critically about investing and make decisions that help us become smarter, happier, and richer.