The Omicron variant has brought the slow reopening of Asia to a juddering halt as governments rush to reimpose travel restrictions even though the new strain is already circulating in the local community.

Thailand and Singapore this week joined Japan in closing their borders to most foreign travellers. All three countries have reported domestic cases of the highly-transmissible new variant, suggesting Omicron will spread even without new arrivals from abroad.

The latest travel restrictions highlight Asia’s hard line against the virus and threaten to hamper the region’s economic recovery in 2022.

Jeffrey Halley, senior market analyst at Oanda in Jakarta, said the economic impact of Omicron in Asia had, so far, been limited because there was little travel activity to halt. “One thing we can be grateful for is this has come now rather than a few months down the line when people had opened up more,” he said.

On Wednesday, Thailand suspended registration for its “Test & Go” travel scheme, launched on November 1, which allowed fully vaccinated visitors to enter the country without quarantining if they tested negative for Covid-19.

The Thai government also suspended registrations for its “Sandbox” quarantine-free travel schemes opened in selected tourist spots around the country, apart from the flagship programme on the island of Phuket, which was launched on July 1.

Bangkok said it would still allow about 200,000 people who had already lodged applications or been approved for the two schemes to enter, and said it would revisit the measures after January 4.

The temporary closure is, however, a setback for Thailand’s vaunted reopening of its tourism industry, which collapsed during the pandemic after the country sealed its borders to most foreign visitors and introduced quarantine requirements from April 2020.

Singapore said it would suspend ticket sales for fully vaccinated travellers seeking to visit from about two dozen countries covered under its vaccinated travel lane or VTL scheme, which include the US, UK, and Germany.

The country’s health ministry said that no new tickets would be issued for people arriving from these countries from December 23 to January 20, and that Singapore would temporarily reduce the number of tickets sold under the scheme after January 20.

Like Thailand, Singapore said that it would allow travellers who already held flight tickets booked on the scheme before December 22 to enter, provided they met all the VTL conditions.

In Japan, the city of Osaka reported the country’s first known Omicron cases without a link to foreign travel. “Because this virus is an unknown we must throw in all our resources,” said Fumio Kishida, the prime minister. “In a crisis, it’s better to do too much than too little, too late.”

New Zealand and Hong Kong, which have both kept Covid-19 to a minimum through some of the world’s toughest border restrictions, have not yet reported domestic transmission of Omicron. Both have stepped up their border controls. 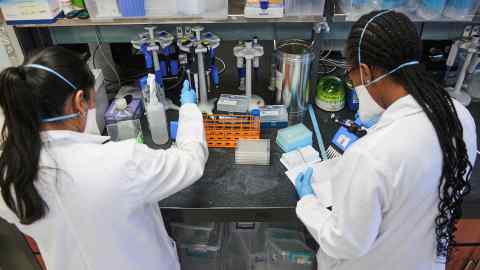 The New Zealand government has postponed its phased reopening of the border, pushing back plans for quarantine-free travel with Australia from January 16 until the end of February. It also extended quarantine for arriving citizens from seven days to 10 and shrunk the window for a pre-flight Covid-19 test from 72 hours to 48.

Chris Hipkins, the minister in charge of New Zealand’s Covid response, said reopening the border was too high a risk. “Our immediate job right now must be to slow it down and delay it from entering the New Zealand community for as long as we possibly can,” he said.

Hong Kong recorded seven new Omicron cases on Wednesday, bringing the total number of confirmed cases for the highly transmissible variant to 34. Although all of the cases were imported, and most were detected during isolation, local health authorities have increased virus-testing efforts and tightened quarantine rules.

The Chinese territory has banned non-residents from more than 90 countries from entering while residents must undergo three weeks of quarantine.

Hong Kong residents arriving from the UK and US, along with 12 African countries on the “highest-risk” list, must spend their first four days after arrival in the government-run Penny’s Bay quarantine camp. They must then spend 17 days of isolation in a designated hotel.