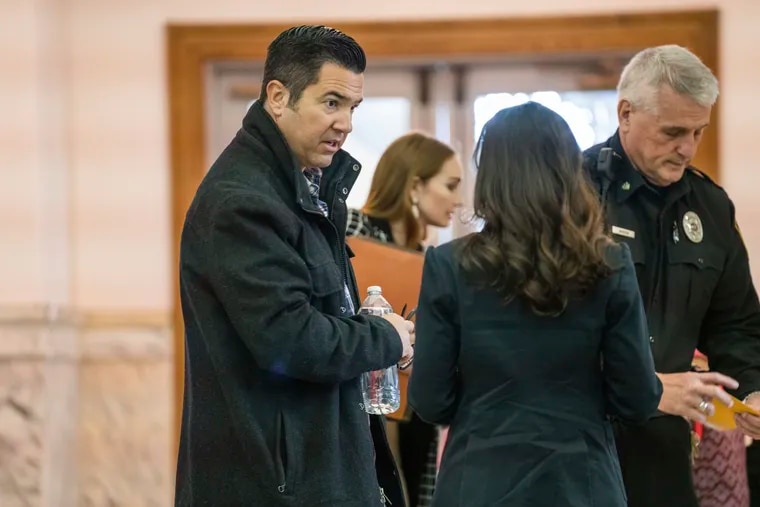 Senate candidate Sean Parnell suspended his campaign Monday, hours after a judge ruled against him in a custody battle that included allegations he had physically and verbally abused his wife and children.

“There is nothing more important to me than my children, and while I plan to ask the court to reconsider, I can’t continue with a Senate campaign,” Parnell said in a statement. “My focus right now is 100% on my children, and I want them to know I do not have any other priorities and will never stop fighting for them.”

His decision capped a rapid collapse for a candidate once viewed as the GOP front-runner in Pennsylvania’s nationally watched race to replace Republican Sen. Pat Toomey.

Parnell, 40, a decorated Army veteran who received a Purple Heart after serving in Afghanistan, won an August endorsement from former President Donald Trump and was well-known as a Fox News commentator. But his campaign unraveled after a rival publicly questioned his personal conduct and then, two months later, when his wife, Laurie Snell, testified under oath that Parnell had choked her, pinned her down, and called her “a whore” during their turbulent, decadelong marriage.

While Parnell denied those claims, the judge overseeing their custody dispute wrote that he found Snell to be “the more credible witness” of the two.

Parnell’s departure leaves a scrambled Republican field in a critical Senate race, one of a handful likely to decide control of the chamber. It comes as Republican insiders have raised concerns about the strength of their candidates and as other potential contenders, including celebrity doctor Mehmet Oz and hedge fund manager David McCormick, consider entering the GOP contest — with Oz said to be hiring aides and almost certain to run.

And it reopens the door for other candidates who had hoped to capitalize on their ties to Trump.

Judge James Arner’s ruling Monday came after emotional testimony earlier this month in a Butler County courtroom that for the first time publicly aired Snell’s allegations of Parnell’s abuse and uncontrolled anger. Despite Parnell’s denials, also under oath, Arner concluded he had committed “some acts of abuse in the past.”

The judge, brought in from Clarion County to oversee the case, added that he didn’t weigh the abuse claims in his custody decision, since he didn’t believe Parnell had been abusive in several years. Both parents, he wrote, were “equally capable of providing adequate physical safeguards and supervision of the children.”

Still, his 15-page ruling undercut Parnell’s denials, and he gave Snell primary physical custody and sole legal custody of the couple’s three children, ages 8 to 12. He allowed Parnell to have the children three weekends a month, a decision both painful to Parnell personally and devastating to his political aspirations. The parents until now have split custody.

Many Republicans thought Parnell’s campaign was finished once the allegations were made in open court, but the judge’s decision piled on even more pressure. Parnell’s campaign had hoped a favorable ruling might lend weight to his public statements.

Snell, in her testimony, accused Parnell of choking her, pinning her down, and screaming insults at her, and once leaving her on the side of a highway while she was pregnant with their first child. She also said he had violently struck their children while flying into rages.

In one incident, she said, he slapped one of the children so hard it left finger-shaped welts on the child’s back. Another time, she said, he punched a door in such fury that it struck another child in the face, leaving a bruise.

Parnell flatly denied those incidents and cast himself as a loving, caring father.

Arner did not offer conclusions about which specific acts of abuse against Snell happened, but wrote that he believed her accounts involving Parnell and their children. Snell, he concluded, “could remember and describe the specific incidents about which she testified. She described many incidents. She provided factual details of each incident, including when they happened and what happened. She testified in a convincing manner.”

By contrast, he wrote, Parnell was “somewhat evasive” and “less believable.”

“He was dressed very casually for his appearances in court, in blue jeans and untucked plaid shirts, which did not show respect for the seriousness of the occasion,” Arner wrote. “While testifying he looked mainly in the direction of this attorneys and toward members of the news media in the back of the courtroom, rather than at me.”

And when Parnell accused Snell of abuse, the judge noted, “he did not provide any facts.”

Arner weighed the competing testimony, but also had access to private testimony from the couple’s children and court-ordered mental health evaluations of the parents.

He noted that more than three years had passed “without further incident” and that Parnell has “properly cared for the children” since then. He also noted that Snell’s agreement to allow Parnell significant time alone with the children, “indicates she does not view him as a threat of harm.”

Another major factor in the ruling, Arner wrote, is Parnell’s frequent travel because of his work as a public speaker, and additional travel required by his Senate campaign. Parnell, in his statement, said that weighed on his decision to end his Senate campaign. He said he was “devastated” by the custody ruling.

Snell’s lawyer, Jennifer Gilliland Vanasdale, said she was “grateful that justice prevailed” and that Snell, now with custody of the children, “will continue, as always, to focus on their best interests.”

Parnell had emerged as the GOP favorite to replace Toomey after narrowly losing a 2020 House race to U.S. Rep. Conor Lamb just outside Pittsburgh. On the heels of Trump’s endorsement he had raised $1.1 million in July, August, and September, and Trump had reportedly planned a January fund-raiser for Parnell at his Florida resort.

Now Republicans are left to reassess their Senate field months before the 2022 primary. Other top GOP contenders include Montgomery County real estate developer Jeff Bartos; Carla Sands, a former ambassador to Denmark under Trump, and conservative commentator Kathy Barnette, but none has managed to stand out so far to many party leaders.

“It is certainly going to shake up the race but we had good candidates that are running as well, with more potentially entering soon,” DeMarco said. He said he expects McCormick, a veteran and former George W. Bush administration aide, to enter the race, though he said he had not spoken to McCormick and there have been mixed reports of his intentions from GOP insiders.

Scrutiny on Parnell’s behavior first arose days after the Trump endorsement late this summer, when Bartos publicly questioned protection-from-abuse orders Snell had sought in 2017 and 2018, saying they made Parnell “unelectable.” Both were temporary and later expunged, so no details were publicly available.

But details of Snell’s accusations did ultimately become public as the couple’s custody hearing unfolded in a cramped courtroom, with Parnell sitting just feet from his estranged wife.

Parnell had sought a gag order on Snell and asked to close the proceedings to the public, but Arner denied him, opening the trial to the media, and making the testimony public.